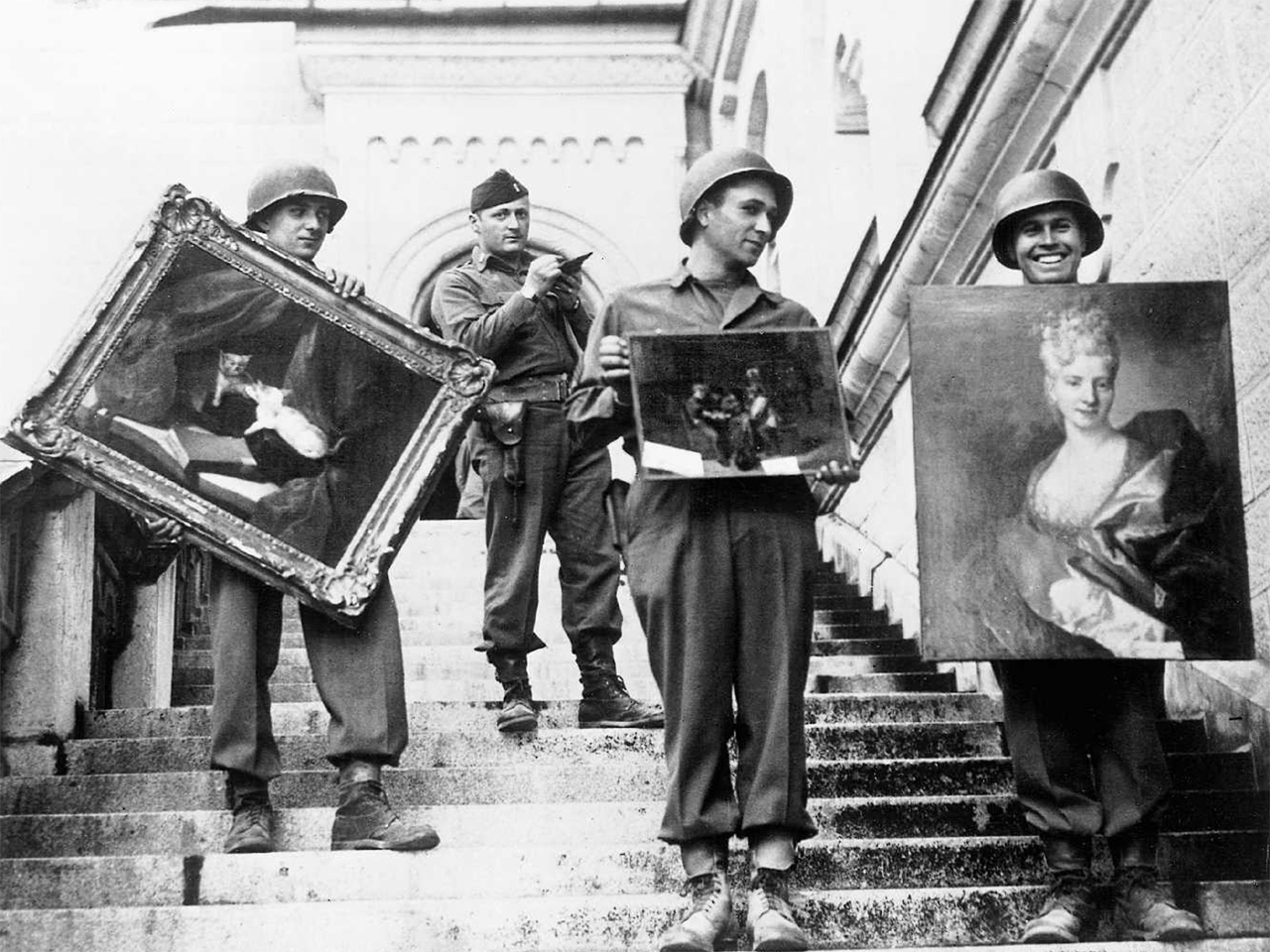 George Clooney and Matt Damon head an all-star cast in the new movie "The Monuments Men," about a group of World War II heroes who did it all for art. The film is based on the research of a man we first told you about in January 2008. With Rita Braver we take another look:

It was brazen and outrageous: the Nazi push to destroy and loot art all over Europe.

That looting spree -- tons of works taken from both personal and public collections -- was perhaps the great pillage in history.

"If you like extraordinary treasure hunts, it's got something for everybody," said Robert Edsel. "There's no way you can't be interested in this story."

It's a story that haunted Edsel ("I like to think of it as a passion, some say obsession"), an oilman from Dallas, Texas. By age 39 he was a multi-millionaire and ready for a change of pace. He sold his business and moved to Italy.

"I was walking across one of the bridges in Florence one day, the Ponte Vecchio, the one bridge that wasn't destroyed during World War II by the Nazis," he said. "And it occurred to me, almost this epiphany: how did all these great works of art survive the destructiveness of World War II? And who were the people that saved them?"

What he learned staggered him!  Not Jewish, and with no relatives caught up in the Holocaust, he spent millions of dollars of his own money to write a book called "Rescuing Da Vinci," and co-produce a 2006 documentary titled "The Rape of Europa."

For one thing, there was the systematic way the Nazis had gone about stealing art -- how, for example, Hitler's second in command, Hermann Goering, made repeated visits to the Jeu de Paume Museum in Paris.

"He could have a glass of champagne, smoke a cigar, and make these selections of works for his own collection -- just take 'em," said Edsel. "Load 'em up on his trains, load 'em up on the planes, and send them back to Germany."

But what really cut through to Edsel was that, while the Nazis were stealing and sometimes destroying treasures, the U.S. was making heroic efforts to safeguard art and architecture, even creating special maps to tell pilots the structures they should avoid.

And when the war was over, there was another extraordinary effort, to return the art to its rightful owners.

Under the command of Gen Dwight Eisenhower, a band of men and women, including some 200 Americans, was assigned to the task. Many of them art historians, they became known collectively as the "Monuments Men."

Harry Ettlinger, a German-born American, was one of them. "I was 20 years old, just turned 20." A photo taken c. February 1946 show Ettlinger holding a masterpiece he uncovered, a self-portrait by Rembrandt.

Ettlinger still marvels at the undertaking: "We Americans, for the first time in the history of civilization, adopted a policy which said that to the victor do not belong the spoils of war."

They found a castle full of property stolen from the Rothschilds and other French Jews. And they discovered Hitler's personal art hoard deep in a salt mine in the Austrian Alps.

Art historian Nancy Yeide, head of curatorial records at the National Gallery of Art in Washington, told Braver the Monuments Men were of "vital importance."

"Not only did they save this art and rescue it, but the records they kept in the restitutions are used by art historians today," she said.

She showed Braver one painting that had been confiscated by the Nazis from a private dealer, the Seligmann Gallery in Paris, and then taken by Goering and kept in his personal collection throughout the war

It was recovered by the Monuments Men, with the rest of Goering's collection, in Berchtesgaden.

Later, the family sold the piece, which is how it ended up at the National Gallery.

"There's such an irony there," said Braver. "You have people who are in the middle of committing genocide, and yet here they are, fancying themselves connoisseurs of art?"

"Yes, it is actually very ironic," said Yeide. "The very people they were eradicating, they were taking their art and keeping track of whom they took the art from."

Uncovering the story of how Americans helped return some of that art earned Robert Edsel the 2007 National Humanities Award; and resolutions were passed in both Houses of Congress to recognize their work.

"They were overlooked after the war," said Edsel, "but these Congresspeople and Senators fully embraced the story as I went around and told them."

There are now only six Monuments Men left. Four of them, including Harry Ettlinger, came to Washington to reminisce about a time and place where good really did triumph over evil.

"Let us announce again and again and again to the people of the world, that their culture will be cherished as long as they respect the culture of others," said Ettlinger. "God bless you. God bless America."