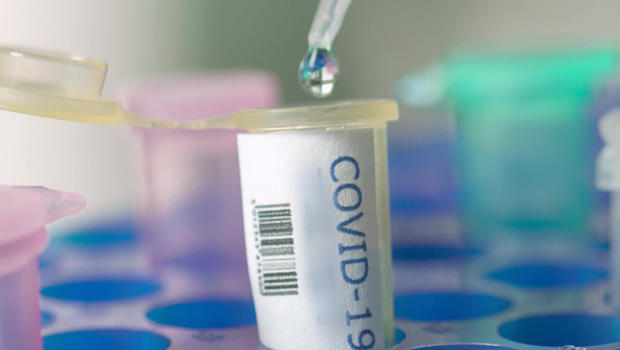 It's not an understatement to say that the entire nation's hopes are focused on what's happening in a Maryland laboratory – step one in manufacturing a potential coronavirus vaccine.

Sean Kirk, executive vice president of Emergent BioSolutions, explained to correspondent Martha Teichner how a bioreactor is used to create the ingredients needed in the development and testing of a vaccine for clinical trials already underway in Australia. "This is where it begins, to produce the hundreds of millions of doses," he said.

Emergent BioSolutions is gearing up now, preparing 4,000-liter tanks, to have hundreds of millions of doses ready to go if and when any of its clients – Novavax, Johnson & Johnson, Vaxart and AstraZeneca – make it to the finish line in the race to a vaccine.

Teichner asked, "What happens to all those vaccines that you're ramping up to have ready on Day One after approval, if it doesn't come?"

"Yeah, the federal government's made it clear that they're willing to invest a substantial amount of money," Kirk replied.

That's $628 million just to Emergent to manufacture them all anyway, before approval, whether they succeed or fail. "If they're deemed to be ultimately unusable, then it's quite possible that they could be discarded," Kirk said.

President Donald Trump announced Operation Warp Speed on May 15. "Its objective is to finish developing, and then to manufacture and distribute, a proven coronavirus vaccine as fast as possible," he said. "Again, we'd love to see if we could do it prior to the end of the year."

To try and meet that target, the federal government has already pumped more than $2 billion into what it's betting are the likeliest to win FDA approval fastest, out of more than 120 in development. Drug industry heavyweights are behind some of the frontrunners: Pfizer, Johnson & Johnson, Merck, AstraZeneca. Not-so-well-known, the biotech firm Moderna touted promising early results for its vaccine, which uses an unconventional new approach to creating immunity.

"We are desperate for a vaccine," said Dr. Paul Offit, a member of the National Institutes of Health panel overseeing the accelerated development of a COVID vaccine. "As a consequence, we're looking for any sort of news that could be good. But I think what we should exercise here is humility."

Dr. Offit fears what he calls "an October surprise," and co-authored an op-ed in The New York Times: "Could Trump turn a vaccine into a campaign stunt?"

"I do worry that as we move to September and October and then Election Day, that there will be pressure to get a vaccine out there even if it hasn't been tested in the way it needs to be tested, which is a big phase 3 trial," he said.

What that means is giving a vaccine to at least 20,000 people, with another 10,000 getting a placebo, and then waiting ... to see who gets a disease and who doesn't.

Typically, those trials last years, not months. It took Offit more than a quarter of a century to get his own vaccine licensed for rotavirus, which killed half a million infants and young children each year around the world – more than the total death toll from coronavirus.

Teichner said, "People are frantic. They're almost panicky about living in a world until there is a vaccine. How do you manage the public pressure to hurry up and get to the finish line?"

"Hopefully, there will be an understanding that in order for us to prove that a vaccine is safe and effective, that it needs to go through this process," Dr. Offit said. "I harken back to the polio days. We waited, despite the fact that every year in this country as many as 30,000 children would get polio and be permanently paralyzed or end up in iron lungs, and 1,500 died. And if you think that the terror of that was any different than the terror of this, you're wrong. So, we could even wait then, and we can wait now."

Abie Rohrig thinks he, and other people of his generation, can help speed up the process. "By my doing this, there is a very real, very immediate chance that a vaccine could be developed earlier," he said. "Lives'll be saved."

Teichner asked, "Even if the cost is getting very, very ill, or even dying?"

Rohrig is 20, a college student, and a member of 1 Day Sooner, an organization calling for controversial human challenge trials, in which healthy, young volunteers ages 18-25 would test vaccines by being exposed to the virus deliberately, no waiting. So far, more than 25,000 people worldwide say they'd do it.

Rohrig said, "I have some history taking on this sort of calculated medical risk, because I donated my kidney last summer. And so, I see this as a very similar situation. I am very willing to take this risk onto myself, because I know that COVID-19 is devastating the world. This is, I think, my generation's World War II, basically."

But with COVID, there are ethical and safety issues. According to Dr. Nadine Rouphael, an associate professor of medicine at Emory University, "We have multiple instances for many diseases, such as influenza, dengue, cholera, malaria, typhoid, where it has been shown that those human challenges actually were able to better understand the infection, but also test therapeutics and vaccines."

Dr. Rouphael has worked on four human challenge trials, which start out with deciding which strain of a virus to use and how big a dose to give.

Teichner asked, "Ordinarily, do diseases or viruses that have human challenge trials, do they have rescue drugs?"

"Typically they do," she said. And with no rescue therapy for coronavirus, the risk is intensified. It would take 3-6 months, she said, just to set up human challenge trials. But she's in favor of moving forward.

Teichner asked, "Is it brave, or is it crazy?"

"If it's done the right way, it's really a service to society," Dr. Rouphael replied.

"So, you're leaning toward brave?"

For COVID vaccines, human challenge trials are still only in the discussion phase, while several of the frontrunners are expected to begin phase 3 trials next month.

At a House Energy & Commerce Committee hearing this past week about the administration's response to the pandemic, Dr. Anthony Fauci said, "I still think there is a reasonably good chance that by the very beginning fo 2021, that if we're gonna have a vaccine, that we will have it by then."

For all Dr. Fauci's optimism, will that first vaccine allow us to take off our masks and feel safe? Will it keep us from getting COVID-19, or just from getting really sick, or dying?

"We have to make sure that people know that it's likely going to protect against moderate-to-severe disease, but maybe not mild disease associated with re-exposure," Dr. Offit said. "So, I think we need to manage expectations."

Is North Korea quietly grappling with a COVID resurgence?
More