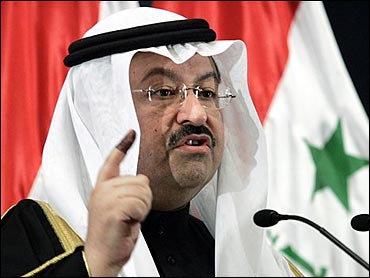 This column from The Nation was written by Naomi Klein.

The Iraqi people gave America the biggest "'thank you' in the best way we could have hoped for." Reading this election analysis from Betsy Hart, a columnist for the Scripps Howard News Service, I found myself thinking about my late grandmother. Half blind and a menace behind the wheel of her Chevrolet, she adamantly refused to surrender her car keys. She was convinced that everywhere she drove (flattening the house pets of Philadelphia along the way) people were waving and smiling at her. "They are so friendly!" We had to break the bad news. "They aren't waving with their whole hand, Grandma -- just with their middle finger."

So it is with Betsy Hart and the other near-sighted election observers: They think the Iraqi people have finally sent America those long-awaited flowers and candies, when Iraq's voters just gave them the (purple) finger.

The election results are in: Iraqis voted overwhelmingly to throw out the U.S.-installed government of Iyad Allawi, who refused to ask the United States to leave. A decisive majority voted for the United Iraqi Alliance; the second plank in the UIA platform calls for "a timetable for the withdrawal of the multinational forces from Iraq."

There are more single-digit messages embedded in the winning coalition's platform. Some highlights: "Adopting a social security system under which the state guarantees a job for every fit Iraqi... and offers facilities to citizens to build homes." The UIA also pledges "to write off Iraq's debts, cancel reparations and use the oil wealth for economic development projects." In short, Iraqis voted to repudiate the radical free-market policies imposed by former chief U.S. envoy Paul Bremer and locked in by a recent agreement with the International Monetary Fund.

So will the people who got all choked up watching Iraqis flock to the polls support these democratically chosen demands? Please. "You don't set timetables," George W. Bush said four days after Iraqis voted for exactly that. Likewise, British Prime Minister Tony Blair called the elections "magnificent" but dismissed a firm timetable out of hand. The UIA's pledges to expand the public sector, keep the oil and drop the debt will likely suffer similar fates. At least if Adel Abd al-Mahdi gets his way--he's Iraq's finance minister and the man suddenly being touted as leader of Iraq's next government.

Al-Mahdi is the Bush Administration's Trojan horse in the UIA. (You didn't think they were going to put all their money on Allawi, did you?) In October he told a gathering of the American Enterprise Institute that he planned to "restructure and privatize [Iraq's] state-owned enterprises," and in December he made another trip to Washington to unveil plans for a new oil law "very promising to the American investors." It was al-Mahdi himself who oversaw the signing of a flurry of deals with Shell, BP and ChevronTexaco in the weeks before the elections, and it is he who negotiated the recent austerity deal with the IMF. On troop withdrawal, al-Mahdi sounds nothing like his party's platform and instead appears to be channeling Dick Cheney on Fox News: "When the Americans go will depend on when our own forces are ready and on how the resistance responds after the elections." But on Sharia law, we are told, he is very close to the clerics.

Iraq's elections were delayed time and time again, while the occupation and resistance grew ever more deadly. Now it seems that two years of bloodshed, bribery and backroom arm-twisting were leading up to this: a deal in which the ayatollahs get control over the family, Texaco gets the oil, and Washington gets its enduring military bases (call it the "oil for women program"). Everyone wins except the voters, who risked their lives to cast their ballots for a very different set of policies.

But never mind that. January 30, we are told, was not about what Iraqis were voting for -- it was about the fact of their voting and, more important, how their plucky courage made Americans feel about their war. Apparently, the elections' true purpose was to prove to Americans that, as George Bush put it, "the Iraqi people value their own liberty." Stunningly, this appears to come as news. Chicago Sun-Times columnist Mark Brown said the vote was "the first clear sign that freedom really may mean something to the Iraqi people." On The Daily Show, CNN's Anderson Cooper described it as "the first time we've sort of had a gauge of whether or not they're willing to sort of step forward and do stuff."

This is some tough crowd. The Shiite uprising against Saddam in 1991 was clearly not enough to convince them that Iraqis were willing to "do stuff" to be free. Nor was the demonstration of 100,000 people held one year ago demanding immediate elections, or the spontaneous local elections organized by Iraqis in the early months of the occupation -- both summarily shot down by Bremer. It turns out that on American TV, the entire occupation has been one long episode of Fear Factor, in which Iraqis overcome ever-more-challenging obstacles to demonstrate the depths of their desire to win their country back. Having their cities leveled, being tortured in Abu Ghraib, getting shot at checkpoints, having their journalists censored and their water and electricity cut off -- all of it was just a prelude to the ultimate endurance test: dodging bombs and bullets to get to the polling station. At last, Americans were persuaded that Iraqis really, really want to be free.

So what's the prize? An end to occupation, as the voters demanded? Don't be silly -- the U.S. government won't submit to any "artificial timetable." Jobs for everyone, as the UIA promised? You can't vote for socialist nonsense like that. No, they get Geraldo Rivera's tears ("I felt like such a sap"), Laura Bush's motherly pride ("It was so moving for the President and me to watch people come out with purple fingers") and Betsy Hart's sincere apology for ever doubting them ("Wow -- do I stand corrected").

And that should be enough. Because if it weren't for the invasion, Iraqis would not even have the freedom to vote for their liberation, and then to have that vote completely ignored. And that's the real prize: the freedom to be occupied. Wow -- do I stand corrected.

Naomi Klein is the author of No Logo: Taking Aim at the Brand Bullies (Picador) and, most recently, Fences and Windows: Dispatches From the Front Lines of the Globalization Debate (Picador).

By Naomi Klein
Reprinted with permission from The Nation