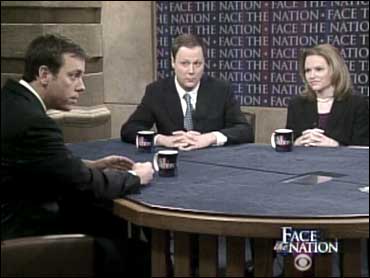 There will soon be a new outlet for political junkies called Politico.com. About 20 reporters from major newspapers like the New York Times and Washington Post have left their jobs to work at the new Web site which will be devoted solely to politics.

Appearing on Face the Nation some of Politico.com's staff gave a preview of the kind of coverage the Web site will feature.

John Harris, the editor-in-chief of Politico.com said his team was motivated to start the new project because they believe there is a huge audience that craves a deeper knowledge about United States politics.

"This is one of the most consequential elections that we're going to be seeing in at least a generation or maybe more," Harris told Bob Schieffer. "And we believe that we want to be all over that story, and that there's a huge audience in Washington and outside Washington that shares our intense interest in this election."

With political battles brewing over the war in Iraq and between Congress and President Bush, the Politico.com staff has a lot of material to cover.

Republicans like Sen. Chuck Hagel, who also appeared on Face The Nation, are standing up against the president's Bush's plan to send more than 20,000 new troops to Iraq.

"I think it's fascinating to see all the opposition to President Bush," Politico.com executive editor Jim VandeHei, said. "What you have to look for going forward now is how many Republicans get on that resolution and actually say no, do not do this? That number seems to be growing by the day. And if when this resolution comes to the floor, you have two-thirds of the members, including a big chunk of Republicans saying, do not do the surge, that is one heck of a conflict between the president and now Congress, a lot of the commanders who are on the field, and a lot of people in the foreign policy establishment."

VandeHei said the number of senators who firmly support the president can be counted on one hand and Bush is finding himself further isolated — making it harder for him to govern effectively.

Iraq will almost certainly be the threshold issue of the next presidential election as well. Standing by the president could hurt Republicans in 2008. For example Harris said the issue is potentially a campaign ending one for Sen. John McCain, R-Ariz., who supports a troop increase.

At the same time, Democrats are stealing headlines with announcements from Sen. Barack Obama, D-Ill., and Sen. Hilary Clinton, D-N.Y., that they will run for president in 2008.

"It puts her on the national stage right before the State of the Union address," Politico congressional reporter Josephine Hearn said. "She wants to be able to engage the president on that and this gives her a wonderful opportunity to."

Hearn said Clinton's decision to announce online with a chat rather than a speech is her attempt to change the way people see her.

"She can be not only authoritative but also charming and likable," Hearn said. "And that does not project very well sometimes through TV or when she's giving big speeches."

While Clinton is already well-known, Obama needs to get the country to understand his positions and abilities Harris said. He needs to prove that he is more than just a fresh face, and that he is authoritative enough to be the president.

"He has not cleared that threshold," Harris said.

The Politico launches Tuesday, Jan. 23. CBS News and CBSNews.com will partner with Politico.com for campaign 2008 coverage.