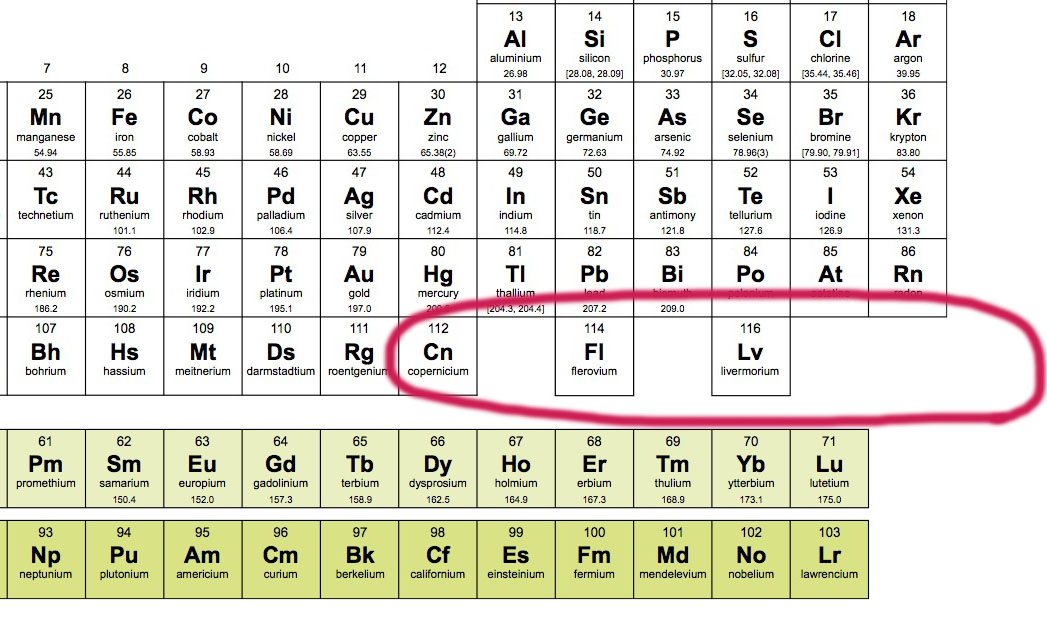 High school chemistry students will now have to learn about four additional elements on the Periodic Table of Elements. The International Union of Pure and Applied Chemistry (IUPAC) has announced the discovery of the new "superheavy" chemical elements, completing the seventh period of the table.

The elements, discovered by researchers from Japan, Russia, and the United States, are known by their atomic numbers of 113, 115, 117, and 118. They will be given permanent names soon, according to a IUPAC release.

Right now, 113 has the temporary working name of ununtrium, 115 is ununpentium, 117 is ununseptium, and 118 is ununoctium, but the scientists who discovered them have the option of proposing other names.

"The chemistry community is eager to see its most cherished table finally being completed down to the seventh row," Jan Reedijk, president of IUPAC's Inorganic Chemistry Division, said in the release. "IUPAC has now initiated the process of formalizing names and symbols for these elements."

The decision to declare these four new elements was outlined in two reports by experts from IUPAC and the International Union of Pure and Applied Physics (IUPAP).

Finalizing names for new elements is a multi-tiered process. Proposed names are checked by the Inorganic Chemistry Division of IUPAC for "consistency, translatability into other languages, possible prior historic use for other cases," among other criteria. After the division accepts the names, the names and their two-letter symbols are presented for public review over a five-month period before the highest body of IUPAC. After this exhaustive process, the final names are announced and are officially included on the table.

These four new "superheavy" elements are not found in nature; researchers created them in a lab by blasting beams of heavy nuclei at other nuclei inside particle accelerators, Live Science explains. The new elements almost instantly decay into other particles after the bombardment stops.

These are the first additions to the periodic table since 2012, and scientists are already working on discovering more, which will begin the eighth row of the table. "We are excited about these new elements," IUPAC president Dr. Mark C. Cesa said.