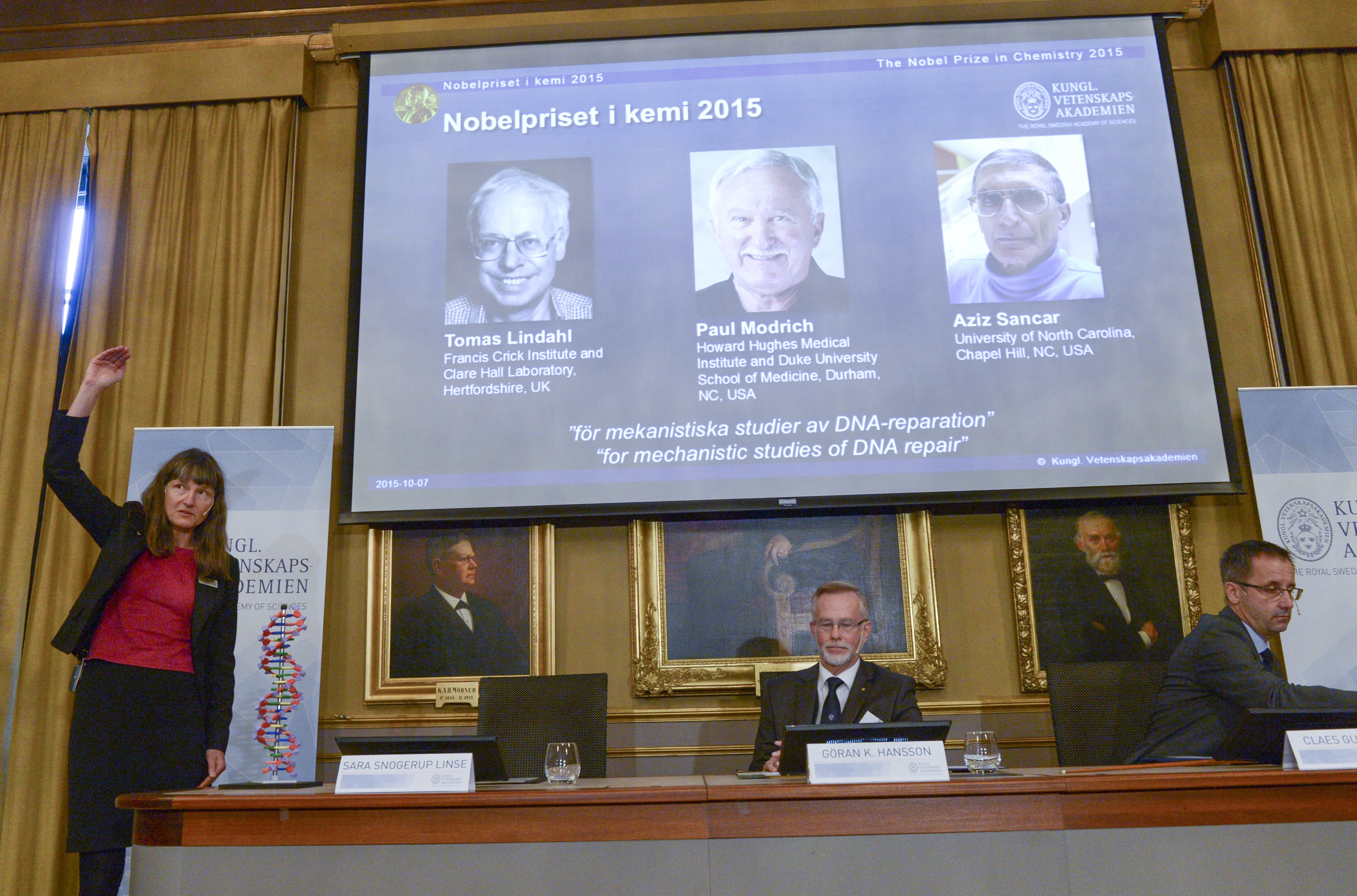 STOCKHOLM -- Three scientists from Sweden, the U.S. and Turkey won the Nobel Prize in chemistry on Wednesday for showing how cells repair damaged DNA, work that can be used to develop new cancer treatments.

The Royal Swedish Academy of Sciences said their work on DNA repair "has provided fundamental knowledge of how a living cell functions" and can be used for the development of new cancer treatments.

Lindahl, 77, is an emeritus group leader at Francis Crick Institute and Emeritus director of Cancer Research UK at Clare Hall Laboratory in Britain.

Modrich, born in 1946, is an investigator at Howard Hughes Medical Institute and professor at Duke University School of Medicine in Durham, North Carolina.

Sancar, 69, is a professor at the University of North Carolina School of Medicine in Chapel Hill, North Carolina. Sancar is the second Turk to win a Nobel Prize after novelist Orhan Pamuk was awarded the literature prize in 2006.

"I'm sure there will be (celebrations in Turkey)," Sancar said. "Yes, they've been asking over the years and I was tired of hearing 'when are you going to get the Nobel Prize?' so I'm glad for my country as well."

Speaking by phone to a news conference in Stockholm, Lindahl said "it was a surprise" to win the award.

Our DNA, the molecule that contains our genes, is constantly under assault from ultraviolet rays from the sun and carcinogenic substances.

But it was thought to be a stable molecule until the 1970s when Lindahl showed that it decays at a rate that seemed incompatible with human life.

He realized that there must a repair mechanism, opening a new field of research, the academy said.

Working at Yale University, Sancar mapped the mechanism that cells use to repair UV-damaged DNA. Modrich showed how the cell corrects errors when DNA is replicated during cell division, a process known as mismatch repair.

The academy highlighted one such drug that's already on the market: olaparib, which is used to fight ovarian cancer.

The award will be handed out along with the other Nobel Prizes on Dec. 10, the anniversary of prize founder Alfred Nobel's death in 1896.

This year's medicine prize went to scientists from Japan, the U.S. and China who discovered drugs to fight malaria and other tropical diseases. Japanese and Canadian scientists won the physics prize for discovering that tiny particles called neutrinos have mass.

The Nobel announcements continue with literature on Thursday, the Nobel Peace Prize on Friday and the economics award on Monday.