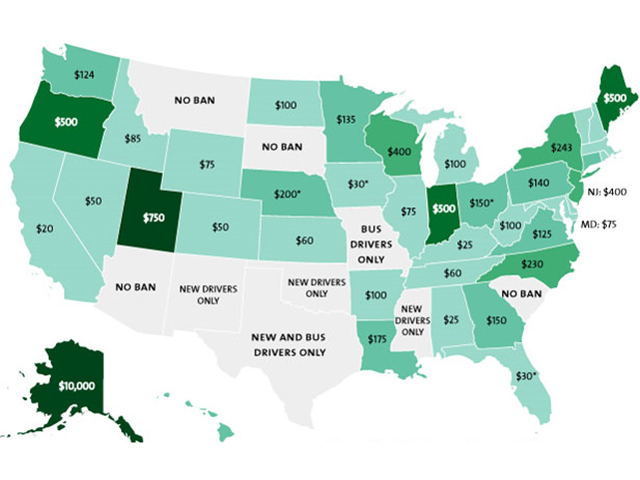 (MoneyWatch) Do you text and drive, read email and drive, or instant message and drive? Hopefully not, but the fact remains that many people are doing it. In fact, a recent study from the Governors Voice on Highway Safety shows that more than a third of drivers are reading texts and emails while driving, and the percentage of accidents in which cell phone use plays a role continues to go up.

What will it take to keep you from becoming a statistic? Just knowing that it's dangerous is apparently not good enough. But what about paying a fine? Almost every state -- all but four -- have passed legislation banning texting while driving.

What's the penalty for using your phone for text or email while driving? It varies by state. Ignoring the four states which have enacted no laws, the lightest bill you can get is in California: Just $20. That's in stark contrast to Alaska, which charges an incredible $10,000 for texting while driving. New Jersey comes down somewhere in the middle, with a $400 fee. You can see all the states in an infographic at Mother Jones, or browse this list, arranged from the most to the least costly states: