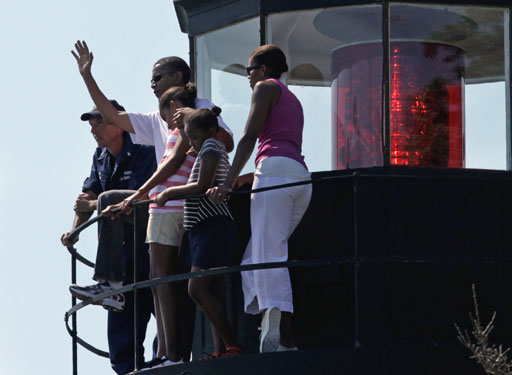 NEW YORK (CBS) President Barack Obama, first lady Michelle Obama and their daughters, Malia and Sasha, took a weekend away from Washington to spend some time hiking, sailing and - in the president's case - enjoying some ice cream in Bar Harbor, Maine.

After arriving in Bar Harbor on Friday, July 16, the first family took a hike up Cadillac Mountain in Acadia National Park. That same day, they were seen on a boat tour in Frechman Bay.

PICTURES: The Obamas in Maine

There was also time for the Commander-in-Chief to take in a sweet treat - he was photographed enjoying an ice cream cone.

On Saturday the first family visited Bass Harbor Head lighthouse. CBS News White House correspondent Mark Knoller noted on his Twitter account that the Obamas lingered atop the lighthouse for about 10 minutes, enjoying the view of the ocean and waving at kayakers who passed by. Malia and Sasha hollered to family dog Bo on the ground below.

That trip was followed by another hike. The president and daughter Malia were seen walking along the Ship Harbor hiking trail in Acadia National Park, while Michelle Obama was seen walking the same trail with press secretary Katie McCormick Lelyveld and Bo.

That night, the president and first lady dined without the girls at Havana -- a restaurant which describes itself as "American fine dining with a Latin flair," Knoller noted.

The first family wrapped up their vacation on Sunday morning, but one member of the first family will be off again soon - Malia is going to sleepaway camp for the first time. President Obama said he'd "shed a tear" when she leaves.