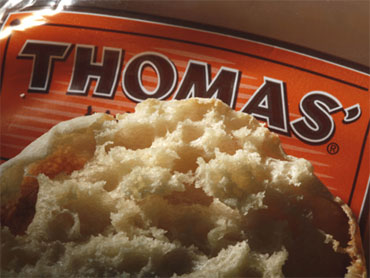 Chris Botticella knows the secret to those "nooks and crannies" in Thomas' English Muffins - the way they cradle butter and jam, and after a good toasting, produce just the right crunch.

It's a secret that the muffins' makers have gone to great lengths to protect over 75 years, allowing it to rack up $500 million in sales annually of the toaster treats.

The company says only seven executives know all three parts of its winning formula for making the muffins - including how much dough to use, the right amount of moisture, and the proper way to bake them.

So it became alarmed and sued in January when Botticella, one of the trusted seven, decided to bolt and join rival Hostess, maker of Wonder Bread and Twinkies.

Hostess Brands Inc. doesn't make English muffins. But that doesn't matter to the lawyers seeking to protect the trademarked "nooks and crannies" in a U.S. baking industry where four major players duke it out on supermarket shelves.

"Botticella could produce an English muffin that might look a bit different, but that would nevertheless possess the distinctive taste, texture and flavor character that distinguish the Thomas' English Muffin and that have been the foundation of the product's success," they argued in a brief submitted to the 3rd U.S. Circuit Court of Appeals.

The Thomas' brand is owned by Mexican food conglomerate Grupo Bimbo SAB. Bimbo Bakeries USA, its Horsham, Pa.-based U.S. unit, says it has good reason to believe Botticella may expose the secret to how its muffins toast up crunchy on the outside and soft on the inside.

Bimbo's lawyers say Botticella hid his new employment deal for months while attending high-level Bimbo meetings and debating strategies for competing with Hostess. They also accuse him of copying a dozen files onto a USB thumb drive in his final days, a charge he denies.

U.S. District Judge R. Barclay Surrick issued an injunction in February barring Botticella, of Trabuco Canyon, Calif., from taking the job at Hostess until the court fight is settled, after finding his account of his actions dubious. Botticella appealed to the 3rd Circuit because he said he is unsure how long Hostess will hold the job open for him.

In depositions, the industry veteran has said he accepted the Hostess offer last fall but stayed at Bimbo through January so he could get his 2009 bonus. He said he'd grown frustrated in the $250,000-a-year job as Bimbo's vice president for operations for the western region so agreed to a $200,000 Hostess offer in Houston.

He argued the confidentiality agreement he signed was valid "only during his employment" and does not bar him from working for Irving, Texas-based Hostess, a privately held company.

Bimbo has other reasons to worry about his jump to Hostess. Botticella knows other secrets as well; he had access to "code books" that spell out production formulas for other Bimbo products, such as its new line of Sandwich Thins.

The bread at stake is considerable.

Bimbo's parent had nearly $900 million in sales in the U.S. in the first quarter and its English Muffins are a big part of that, along with its tortillas, snacks and cookies. (Bimbo is a short version of the Spanish word bambino, or small child.)

Thomas' fans understand why the company is so protective of its "nooks and crannies."

"The butter melts and those craters catch the butter, or anything else, whether it's jam or honey," said Elise Bauer, who operates simplyrecipe.com and has been eating the muffins since she was a child. "The honey can swim in the butter. It doesn't drip through."

"You toast them and the tips of the craters get all toasty and brown," she said.

Robert McCarroll, who runs The Good Steer, a family restaurant on New York's Long Island, said that Thomas' English Muffins have been used to bookend its hamburgers since the eatery opened 53 years ago.

"We've been doing pretty much the same thing since 1957," he told The Associated Press.

"They add a nice consistency," he said. "The way they toast because of those nooks and crannies, it's an English Muffin and not just a round piece of bread."

In the Pennsylvania court case, the issue on the table is whether a leak must be inevitable or merely probable before the judges can stop Botticella from taking his a new job.

"It's a horrible situation he finds himself in," said one of his attorneys, Elizabeth K. Ainslie. "If the assistant coach of the Philadelphia Eagles moves to the Dallas Cowboys, is he supposed to forget all of the plays that he learned while at the Eagles?"
By Associated Press Writer Maryclaire Dale