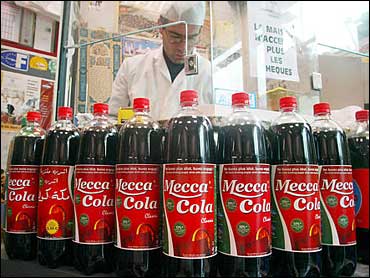 The cola wars are taking on a new dimension in Europe, where Muslims are being asked to pledge allegiance to one of two new brands.

By offering a dose of activism along with the usual sugar, preservatives and carbonated water, the entrepreneurs behind both new drinks are trying to cash in on anti-American sentiment within Britain's 2.5 million Muslim community.

"The Qibla brand offers a real alternative for people concerned about the practices of some major Western multinationals who support causes that oppress Muslims," said company founder Zahida Parveen.

"By choosing to boycott major brands, consumers are sending a powerful signal: that the exploitation of Muslims cannot continue unchecked."

Qibla was launched in the British market this week following the success of French-Tunisian businessman Tawfiq Mathlouthi's Mecca brand in France.

Mecca, launched in November, was originally targeted at France's Muslim community. But it quickly caught on to a broader market and the bottles — each one described by Mathlouthi as "a little gesture against U.S. imperialism and foreign policy" — are also being distributed in Britain. Both companies have plans to expand to other European countries.

Parveen and Mathlouthi deny a direct attack on Coca-Cola, though the red-and-white swoosh labeling on both products bears a strong resemblance to the U.S. brand. But, they say, the soft drink giant represents American capitalism.

Amirah Ali, a spokeswoman for the London-based Islamic Human Rights Association, said the war on terrorism has made all American brands a focus for resentment, and buying alternative brands makes the Muslim community "feel better."

"It makes us feel like we can do something," Ali said. "Coca-Cola has become a big symbol of America. It's a tangible symbol at a time when there is increasing unhappiness about U.S. foreign policy."

In London's Brick Lane, where there is a large Muslim community, opinions on the success of a boycott are mixed.

"I don't think it does anything. How does that help people who are suffering in Palestine?" said Abdul Mahmood, who was buying Coca-Cola from a local store.

But Ahmed Hussein said he would purchase alternatives if they were readily available. "Economic power is important and anything we can do to break that is a good thing."

Martin Norris, communications director for Coca-Cola U.K., said the company did not engage in religious or political arguments and dismissed the newcomers.

"I think consumers are able to make a very clear distinction between the soft drink they want to drink and whatever the policies of the American government are," Norris said.

Qibla and Mecca have pledged to commit 10 percent of their profits to Islamic charities.

Norris responded that Coca-Cola provided investment where it operated, including in the Palestinian administrative headquarters in the West Bank, where it opened a plant in 1998.

"We have a plant in Ramallah which has 200 employees and is supporting the local economy. We think that's a better way of serving the community," he said.

Coca-Cola has said that an unofficial boycott of U.S. products in the Arab Middle East in retaliation for Washington's support of Israel has hurt its bottom line in the region.

Zam Zam Cola, the Iranian drink introduced after that country's 1979 Islamic revolution, had huge sales growth a few years ago when a prominent Muslim cleric ruled that Coke and Pepsi were "un-Islamic."

Zam Zam is now exporting to Saudi Arabia and other Persian Gulf countries, shipping more than 10 million bottles in the last four months of 2002.

Qibla — named for the direction the faithful face when praying toward Mecca — has plans to expand into the Middle East, Africa, South Asia and the Far East.

Abdul Hamid Ebrahim, a spokesman for the company, said Muslim countries like Indonesia, Pakistan and Bangladesh are being targeted. Qibla hopes to increase production to a million bottles a month in March.

Still, that's a long way from Coca-Cola, which sells more than 40 million 8-ounce servings every hour around the world.