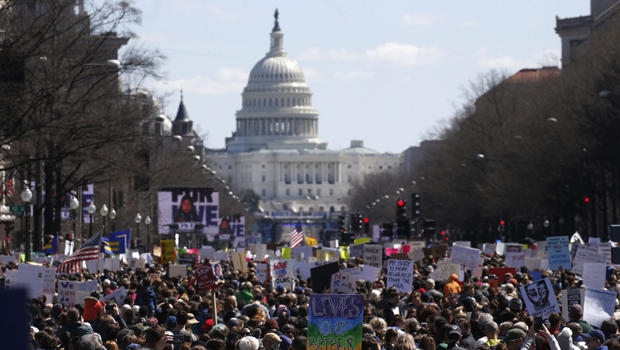 The MARCH FOR OUR LIVES -- a worldwide series of marches, actually -- attracted hundreds of thousands of young people determined to put a stop to gun violence. Chip Reid in Washington watched the remarkable day unfold:

In the shadow of the U.S. Capitol, the teenage leaders of the March for Our Lives had a message for the nation's leaders: "The voters are coming!" said Cameron Kasky, to cheers.

It's a message that echoed at protests across the nation, from New York to Los Angeles, from Atlanta to Minneapolis, and to Marjory Stoneman Douglas High School in Parkland, Florida, where 14 students and three staff members were killed by a gunman last month.

But it was Washington that drew the biggest crowd. Participants ran the spectrum, and included those speaking for less-visible victims of gun violence.

Naomie Wadler said, "I am here today to acknowledge and represent the African-American girls whose stories don't make the front page of every national newspaper."

But the main attraction may have been the teenagers known to many as the Parkland kids.

"Look around -- we are the change," said Kasky.

Emma Gonzalez read the names of the 17 victims, and then honored them by standing in silence.

This is not the first time survivors of mass shootings and families of the victims have fought to change the nation's gun laws. After 20 first graders and six teachers were killed at Sandy Hook Elementary School in Newtown, Connecticut in 2012, some gun control advocates thought certainly this horror would make change inevitable.

Parents of victims stormed Capitol Hill urging lawmakers to toughen gun laws. Even so, a bill to require universal background checks failed in Congress. "All in all, this was a pretty shameful day for Washington," said President Obama.

But the Parkland teenagers insist this time is different.

"Americans are being attacked in churches, nightclubs, movie theaters and on the streets," said Kasky. "But we the people can fix this. For the first time in a long while, I look forward 10 years and I feel hope. I see light."

Dave Cullen agrees. He wrote a book about the 1999 shooting at Columbine High School in Colorado, and has been covering school shootings ever since. He says the Parkland teens have energized the dispirited gun control movement by giving it a youthful and hopeful face.

"What they figured out that we never figured out [is], that you make the survivor story more compelling than the killer story," Cullen said. "You put him on the back page."

Reid asked, "Did you ever think the heroes of the gun control movement would be high school kids?"

"Never occurred to me in a million years," Cullen replied.

In Washington, the idea that this time it's different resonated with the crowd.

"It's a youth movement, and that makes me hopeful," said Gabrielle Weiss, "because I feel like as adults we haven't really been able to do much about this."

Alex Weiss says the Parkland shooting hit him especially hard because his wife is pregnant. "I had this really visceral fear that I would have a child that would go to school and I would have to worry about them coming home," he said.

Clearly, the focus of this rally as put together by those Parkland students is gun control. But there are some people who have suffered dearly as a result of the Parkland shooting who believe the top priority is not guns; it should be securing our schools

"She was my baby of the family, and she was daddy's princess," said Andrew Pollack. "It's unimaginable, the pain."

Pollack's daughter, Meadow, was one of the 17 who were killed in the Parkland shooting. He wants to help other parents avoid the agony of losing a child. And the way to do that, he says, is to secure the schools just like we secure stadiums and airports -- with armed guards and metal detectors ... something he made clear at the White House while meeting with President Trump just days after the shooting.

He admires the student organizers of the march in Washington, but he did not attend.

"I know they're bringing awareness to the cause, but I would say, 'Listen, let's do something right now that's achievable,'" Pollack told Reid. "When you start getting into gun control, they'll be fighting that for -- way past I'm dead."

But try telling that to Parkland teenager Delaney Tarr, who firmly believes change is coming.

"This is more than just one day, one event, then moving on," Tarr said Saturday. "This is not a mere publicity stunt, a single day in the span of history. This is a movement. This is a movement reliant on the persistence and the passion of its people."