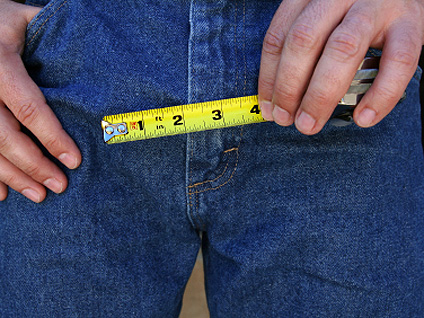 One noninvasive technique to lengthen penises— penile traction devices — shows promise, according to a new review of research. But researchers say most men who seek longer penises don't really know the long and short of their situation.

"Penile size is a matter of great interest among men who are affected by 'short penis syndrome' or just believe themselves to have a small penis, even though the dimensions of the organ fall within the normal range," write urologists Marco Oderda and Paolo Gontero in the current issue of the British Journal of Urology International.

Oderda and Gontero, both from the University of Turin, Molinette Hospital, in Italy, concluded that for those men who have a normal-size penis yet persist in requesting treatment, penile extenders may be the way to go. Cognitive behavioral therapy may also be useful for building confidence in these men with psychological issues causing the mismatch between reality and what's in their head, they write. (Related: Penis Myths Debunked)

Several nonsurgical methods for lengthening the penis, such as penile traction gadgets, vacuum devices, penoscrotal rings and even "physical exercises," have been popularized in the media.

To get a real picture of the science on such devices, the researchers did an extensive search for studies on the topic of "short penis" and associated treatments, ending up with just 10 studies that met their criteria.

Based on one study, vacuum devices got a failing mark, showing no significant penile elongation after six months of therapy, though the researchers of that study noted it provided psychological satisfaction for some men. Penile-lengthening exercises also had no science backing up their effectiveness.

The few well-conducted studies on penile extenders, which use mechanical traction to progressively elongate the penis, showed these devices can produce an "effective and durable lengthening of the penis," the researchers write.

For instance, a small study published in 2002 in the International Journal of Impotence Research showed a penis stretcher called Andropenis could add 0.7 inches (1.8 centimeters) on average to the sex organ after four months of use for at least six hours a day. That extender device showed promise in another study with six months of use for at least four hours a day. And the Golden Erect extender was shown to increase penis length in participants of a study published in 2010 in the Journal of Sexual Medicine.

Many men who are concerned with their penis's small stature suffer from "dysmorphophobia," a condition where people see some imaginary flaw in physical appearance as real — in this case a false perception of penis inadequacy, the researchers say.

And apparently this male body-image problem is on the rise. According to LiveScience's Bad Medicine columnist, Christopher Wanjek, "Many men long to have something longer, even though few have a penis that is too small to copulate or pleasure their partner. This anxiety over size is called penile dysmorphophobia, and it is on the rise worldwide as men turn to pornography and compare notes."

Urologist Nicola Mondaini of the University of Turin in Italy agreed, telling LiveScience "this trend is increasing."

That said, penile shortening is a real medical phenomenon and can be caused by so-called a radical prostatectomy for prostate cancer, Peyronie's disease (an acquired penile deformity of the erect penis) and as a result of embryonic or developmental defects. In addition, a so-called "hidden penis," caused by obesity, aging with an overlying fold of abdominal fat and skin, and a shortage of penile skin from circumcision, for instance, can also "shorten" the penis.

As for how prevalent penile dysmorphophobia is, in one study published in the International Journal of Impotence Research in 2002, 67 men with a median age of 27 came to the university hospital in Italy within a two-year period complaining of having a short penis. None of the patients fell into the category of a short penis; in other words, all were of normal size.

Sixty percent of the men said their feeling of inadequacy down there started in childhood when they noticed their friends were more endowed. Fifty-seven of these patients thought a normal penis length was somewhere between 3.9 and 6.7 inches. (10 and 17 cm). The others didn't know what "normal length" was. These results suggest penis lengthening is not the answer, the researchers pointed out in that study.

One of the largest penis-size studies involved more than 3,000 men and found similar results – that most men seeking size enhancement were within the normal size range and overestimated the average penis size. That study was published in the International Journal of Impotence Research in 2002.