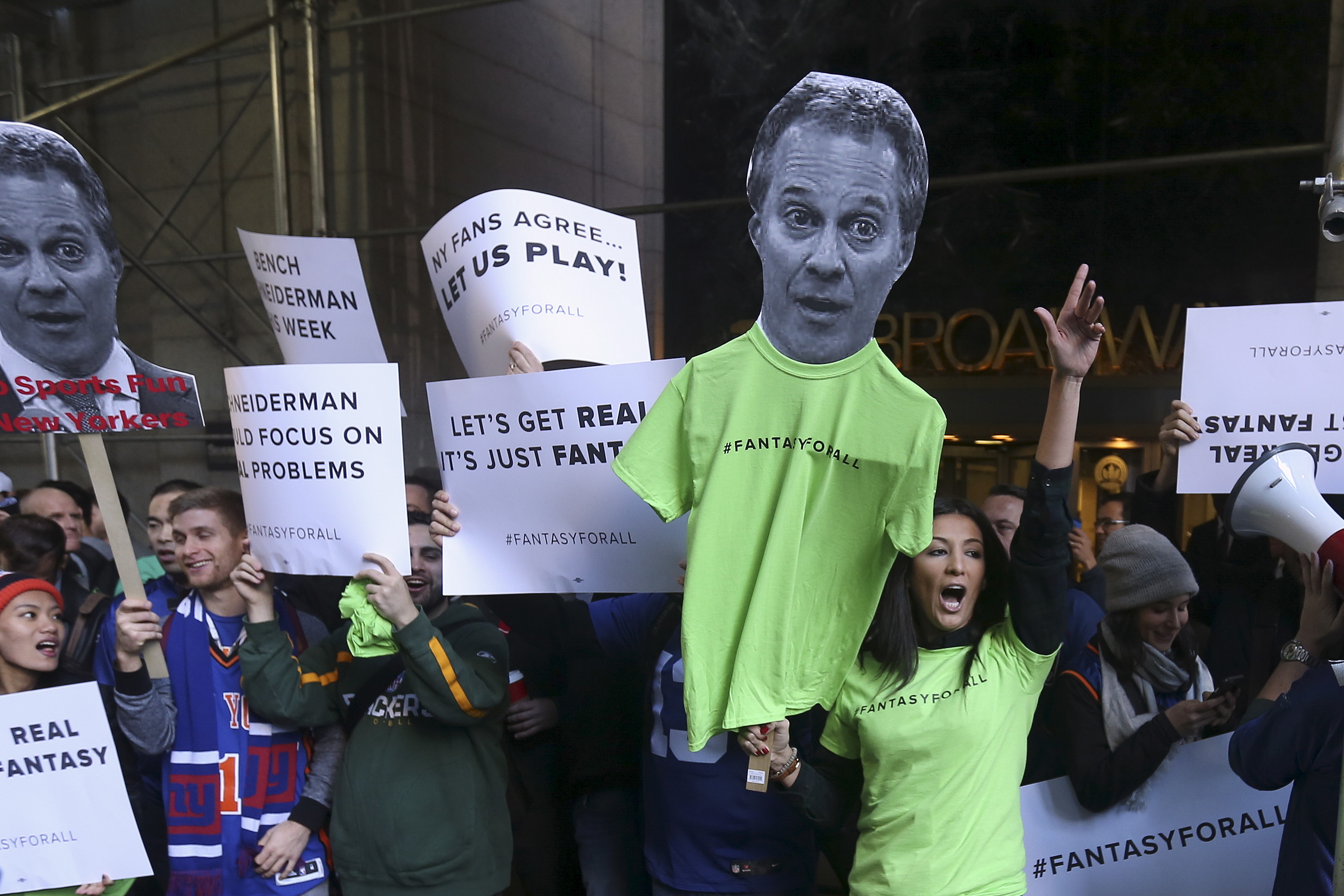 The gloves are off in the escalating legal fight between New York Attorney General Eric Schneiderman and DraftKings and FanDuel, the two largest operators in the fast-growing daily fantasy sports market.

The companies Friday asked a New York state court to quash a "cease-and-desist" letter from Schneiderman ordering them to quit doing business in the state, arguing they aren't breaking any laws.

In its filing, DraftKings accused Schneiderman of "using strong-arm tactics and defying the rule of law." FanDuel said in a statement: "We are entitled to due process and look forward to being heard in court."

FanDuel and DraftKings, though, may be taking different approaches about what to do with their New York players. In a statement released late Friday, FanDuel announced that it would stop accepting new deposits from New York players as precautionary measure while it pursues its legal challenge against Schneiderman. The decision was made with "great disappointment," according to a company statement.

DraftKings has hired powerhouse law firm Boies, Schiller & Flexner to represent the company in the case. It wasn't immediately clear whether the site would follow FanDuel's lead, which gaming law expert Marc Edelman said was a prudent legal strategy. Calls and emails to the firm's outside public relations agency weren't immediately returned. A Boies, Schiller spokesman referred all questions to the company.

On Friday, more than 300 fans of fantasy sports protested outside Schneiderman's Manhattan office, carrying signs such as "Schneiderman should focus on real problems."

However, Schneiderman isn't backing off. "DraftKings and FanDuel are operating illegal sports betting websites under New York law, causing the same kinds of social and economic harms as other forms of illegal gambling," a spokesperson for Schneiderman said in a statement. "Because both companies have refused to follow the law in our state, we will take action to enforce state law."

The industry has argued that daily fantasy sports is a game of skill, not chance, and therefore isn't gambling. Its business practices have come under scrutiny in recent weeks after The New York Times disclosed that DraftKings employee Ethan Haskell won $350,000 playing on FanDuel on the same weekend he accidentally published sensitive information on an open forum. Both companies have denied that Haskell profited from inside information.

The stakes in the legal battle between the daily fantasy sports industry and Schneiderman are high. New York is a key market for both DraftKings and FanDuel, whose headquarters are in New York City.

"It strikes me that daily fantasy sports ... has to fight this tooth and nail," said Bennett Liebman, government lawyer-in-residence at Albany Law School's Government Law Center. "There really is no endgame for them in New York. Unlike most states, gambling is technically illegal under the state constitution. So, if this is gambling, they're out."

Defining what is meant by "skill" and "chance" isn't going to be easy, said Liebman, who was Gov. Andrew M. Cuomo's deputy secretary for gaming and racing. "New York's law is unclear as to how you evaluate the elements of luck and skill in any potential gambling game," he said. "There's no objective way to measure it. ... No one can really be sure how a court will look at whether or not this game is determined by chance or skill."

Other states, such as Maryland and Pennsylvania, are also taking a closer look at the industry.

When lawmakers in Maryland legalized season-long fantasy sports leagues in 2012, the popularity of daily sites such a DraftKings and FanDuel "was not even fathomed," according to Andrew Friedson, a spokesman for Maryland Comptroller Peter Franchot, who is supervising his state's review.

"Comptroller Franchot wants to make certain that these gaming companies are operating legally, that taxes are being properly collected and that Maryland consumers are protected from any potentially detrimental industry practices," he wrote in an email to CBS MoneyWatch.

Jeffrey Johnson, a spokesman for Pennsylvania Attorney General Kathleen Kane said in email to CBS MoneyWatch that the state's review of daily fantasy sports is "ongoing, and we will act accordingly once it is complete."

CBS has an investment in FanDuel of less than 1 percent of that company's value.