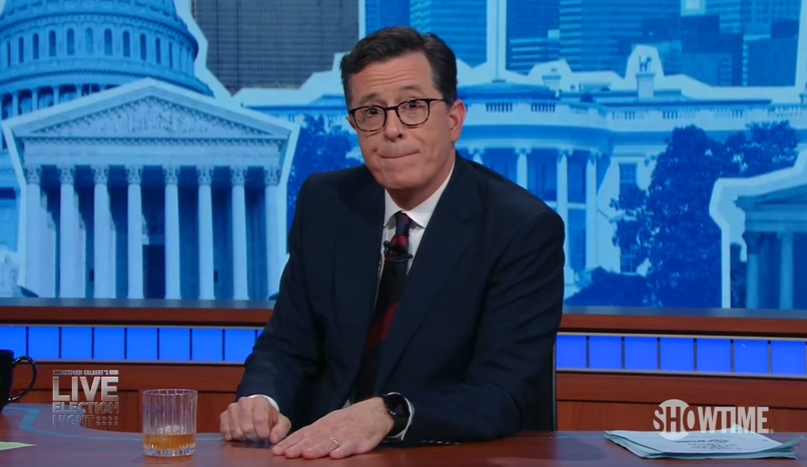 Colbert was live on CBS’ sister-network “Showtime,” for a special on the election, called: “Stephen Colbert’s Live Election Night Democracy’s Series Finale: Who’s Going To Clean Up This Sh*t?’” The YouTube video of his monologue has since been viewed nearly two million times.

At the time of Colbert’s monologue, Trump’s victory was not yet official.

“I think we can agree, that this has been an absolutely exhausting, bruising election for everyone. And it has come to an ending that I did not imagine,” Colbert started, before joking, “We all now feel the way Rudy Giuliani looks.”

Colbert then turned more somber, while talking of the division the nation is currently facing.

“So how did our politics get so poisonous?” he asked. “I think it’s because we overdosed, especially this year. We drank too much of the poison. You take a little bit of it, so you can hate the other side. And it tastes kind of good. And you like how it feels. And there is a gentle high to the condemnation, right? And you know you’re right, right? You know you’re right.”

Colbert then reflected on the politics of his childhood, and in particular, his mother.

“When I was a kid we didn’t think about politics this much,” he said. “A lot, but not this much.”

“We stuck with safe subjects... back then you talked about religion at the dinner table, tried to guess which family member was gay,” he laughed, “back when it mattered.”

“Politics use to be something we thought about every four years, maybe two years if you didn’t have a lot of social life,” he quipped. “And that’s good that we didn’t think about it that much, because it left room in our lives for other things, and for other people.”

Colbert’s late mother was born two days before women could first vote in a presidential election.

“But again, I don’t know what is going to happen,” Colbert said, as Trump still was not declared the president-elect. “But I was thinking this was going to be the time she got what she wanted. She told me at age 92, short before she died, ‘oh I think I would vote for Hillary this time, it’s time.’”

Colbert said his mother only voted for one Democrat in her life, and that was Kennedy.

“Because, spoiler alert, we are Catholic,” he joked.

“Now politics is everywhere,” Colbert continued. “And that takes up precious brain space that we could be using to remember all the things we actually have in common. So whether your side won or lost, we don’t have to do this sh*t for awhile. So keep your American flag up, but you can take off your American flag hat. You can put away your ‘I Voted’ stickers, and you can get back to your life.”

Colbert then said he would like to end the election season by voting unanimously on a few things that bring all Americans together.

“Fair warning, some of these are silly...but in the face of something that might strike you as horrible, I think laughter is the best medicine. You cannot laugh and be afraid at the same time, and the devil cannot stand mockery.”

He then took a lighter note, telling a series of jokes, including:  “No matter where you stand on Hillary’s private server, every American agrees, work email sucks.”

Towards the end of his monologue, Colbert  encouraged his audience to stand.

“And above all, we as a nation agree, that we should never, ever have another election like this one,” he said, to a clapping and cheering crowd.

“The election is over. You survived,” he ended his monologue. “Goodnight, and may God bless America.”