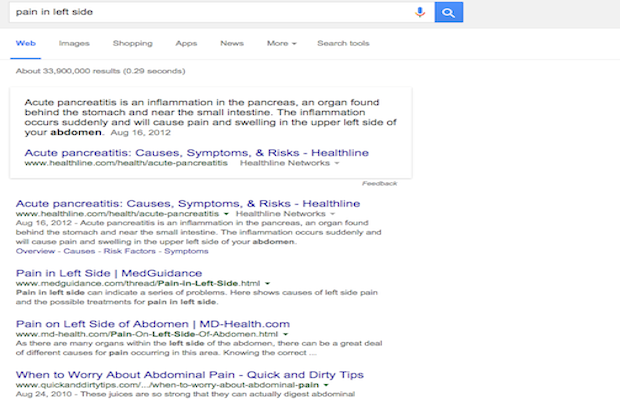 Asking the Internet for medical advice is something millions of us do every day. More than a third of Americans say they check with "Dr. Google" when they feel symptoms coming on. But the proliferation of health information online offers a mixed bag of valuable resources and misleading or junk information.

Though the Internet can be a source for excellent information, doctors and researchers say it can also be a path to unnecessary anxiety, stoking people's worst fears at vulnerable moments.

Debbie Kaufman of Hidden Hills, California, said she started feeling something was wrong in July. "I started to feel ... I wouldn't even describe it as a pain, more like a weird feeling in one spot of my stomach," she told CBS Los Angeles reporter Andrea Fujii.

She went first to an urgent-care clinic where she had an MRI. The test showed some unexplained spots on her liver and the doctor didn't provide further detail on what exactly they were.

"He's like, 'Well, you have about three to four nodules on your liver. We don't know what they are. They could be cancer. They could be benign,'" she said.

When she went home, her worry and desire to understand what could be happening led her through several Internet searches on cancer and liver cancer. The possibilities she read told her the situation could only be bad and worse.

"I was so upset, sad, devastated, thinking about what I need to do before I die."

Kaufman was so convinced she started spending special days with each of her kids, one-on-one, while she still had time.

When she finally went to a specialist for further diagnosis, the results weren't nearly as dire as she had thought.

"In her case, she was pretty convinced that she had something very severe," Anton Bilchik, the chief of medicine and professor of surgery at John Wayne Cancer Institute in Santa Monica, told CBS Los Angeles.

The spots weren't cancer at all. They were benign tumors that were successfully removed in surgery four days later.

"Here I was, panicking. I couldn't even move, I was so scared. And he was just very optimistic about it. He's like: I'm 99 percent certain this is not cancer," Kaufman said. "So, I misdiagnosed everything and I wasted so much of my energy."

Kaufman is one of millions of Americans who try to self-diagnose using websites and apps. The National Institutes of Health says that more than a third of adults do the same.

Doctors and researchers are concerned about the trend for a few reasons, including the stress it can cause patients and the fact that the accuracy of the information is unreliable. Often, relying on online information leads to more worry about potential conditions and it can also result in spending more money trying to self-treat.

"Just about every patient I see, I walk into the room, and the first thing I ask is: what have you read?" Bilchik said. "I have a lot of concern that treatable, curable conditions are going to be missed or the treatment is going to be delayed."

The first wide-ranging study of online symptom checkers was conducted by Harvard Medical Systems and published in the journal BMJ in July, showing these mixed results. Online symptom checkers accurately diagnosed symptoms about 34 percent of the time. About half the time, the correct diagnosis was one of the top three options on the list; it was in the top 20 in 58 percent of cases.

"These tools may be useful in patients who are trying to decide whether they should get to a doctor quickly," the senior author of that study, Ateev Mehrotra, associate professor of health care policy and medicine at HMS and Beth Israel Deaconess Medical Center, said in a statement. "But, in may cases, users should be cautious and not take the information they receive from online symptom checkers as gospel."

The study also found that for people who do choose to look up information about their health symptoms online, it's better to use the range of symptom checkers that are offered by medical schools, insurance companies, and government agencies.

Conducting broad web searches through search engines is not as reliable. The kind of conditions that Internet checkers diagnose the best are milder conditions like a cold or the flu.

Still, the information should be taken for what it's worth -- something that may be useful to help educate patients and possibly guide further questions, but not a substitute for visiting the doctor in real life for checkups and tests.