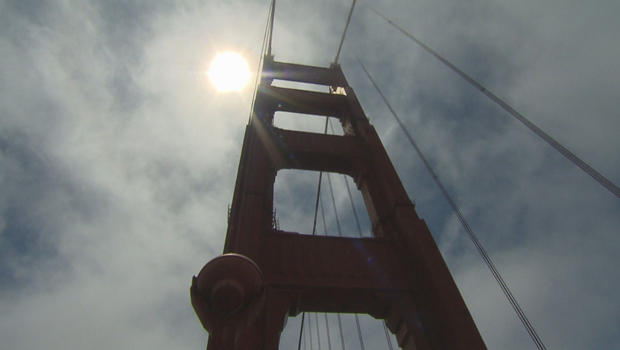 A "friend for life" has been campaigning for years, along with others, to make a California landmark safer. John Blackstone has her story:

On a stage in Nashville, songwriter Sarah Lockwood Barr performs songs she's written that she loves to sing ... and one that breaks her heart.

"This is for Casey Brooks, who would have turned 27 this past May," she announced, before playing "Starting Over":

She and Casey grew up, she says, in a comfortable California town just north of San Francisco.  "We learned to ride bikes together," Lockwood Barr said.

Senior year of high school was almost over, and they were ready to go off to college. But shortly before graduating, in January 2008, "Casey jumped off the Golden Gate Bridge and ended her life," Lockwood Barr said.

"And you had no idea?" Blackstone asked.

"Nobody did. She was already accepted into college. She was a really talented writer. She had a good crew of friends. There was no reason, as far as we could tell.

"And it was really easy for her. There's a parking lot right at the base of the bridge. The guardrail's only four feet high. So you can just kind of pretend you're walking across the bridge and hop over. And it's a 220-foot fall. And that's it."

Casey's father, John Brooks, told Blackstone, "Every time we drive over the bridge, every time we look at the people laughing and smiling and taking selfies of themselves and enjoying this, that's what we used to do. And then, you know, Casey jumped, and it all changed."

The beautiful landmark at the entrance to San Francisco Bay has an ugly side. Casey Brooks is one of nearly 1,700 suicides on the bridge since its opening in 1938. Last year, 39 people jumped from the bridge.

But that toll may be coming to an end.

For years Brooks' parents, John and Erika, and Sarah Lockwood Barr have been striving with others who lost love ones on the bridge to convince the bridge board to erect a net -- a suicide barrier.

"So I really hope that the board puts safety ahead of inconvenience," John said at one meeting.

Blackstone said, "A barrier on there, you say, would tell people someone cares."

"Exactly," said Erika. "We care enough about you so that when you're not looking out for yourself we're letting you know we care."

"That is certainly not the only place, by any means, that people can end their lives. How would a net change things?"

John replied, "What we've learned about suicide is that in a lot of cases, it can be very impulsive. Yet, if you are prevented from acting on that impulse, the chances are very, very good that you won't have a recurrence."

Kevin Hines is one of the few who jumped and survived. ("I walked back toward the traffic railing, I ran forward and I catapulted myself over the rail," he recalled.) He's also a strong advocate for a net to prevent others from making the same bad decision.

Blackstone asked, "When did you realize it was a mistake?"

"The millisecond my hands left the rail and I was in freefall, which I thought was too late," Hines replied.

A study in 1978 of 515 people who attempted suicide on the Golden Gate Bridge but were stopped found that 90 percent did not die from suicide later. But for years that wasn't enough to convince officials the bridge should get a net.

John Brooks said, "There were people who believed that this bridge cannot be touched. It's an iconic structure. It's sort of like the Mona Lisa -- you can't touch the Mona Lisa. So there was an aesthetic issue."

When asked about the argument that millions of dollars would be spent on a net that would "ruin" an icon, Lockwood Barr responded, "How much money would you pay for your child? What's the price tag on your husband or wife?"

In the nearly ten years since she joined the campaign to build the net, Lockwood Barr has gone through times of hope and disappointment. "We had all these sort of fake-outs," she said. "Something would pass, and then a budget would come about. And then it would get pulled because there was a new estimate on cost. And then someone else would come in with an appeal.

"And you know, I kind of lost hope at a point. Like, it just started feeling like a slap in the face every time, you know, we'd get really excited something was happening."

This spring, their determined persistence finally paid off. The long struggle for a net ended with a ceremony at the bridge marking approval of plans for a $200 million suicide barrier, due for completion in 2021.

"It'll be so healing," Lockwood Barr said. "Because it also sends a statement to the community and to the world that life is valuable and life matters. This is us saying, 'We value your life and your struggle.'"

(If you or someone you know is considering suicide, please call a trained counselor at National Suicide Prevention Lifeline at 1-800-273-TALK [8255].)