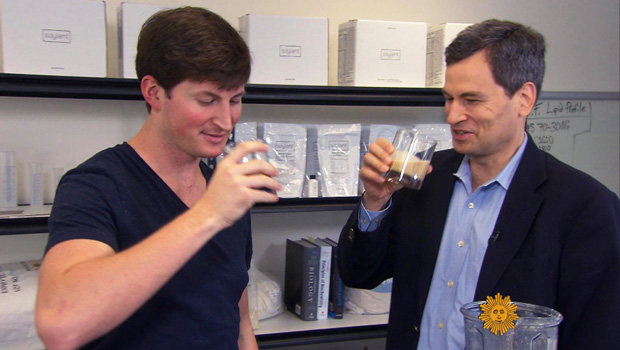 What is the "next course" for humankind? A glass of a nutrition drink called "Soylent"? Along with some freeze-dried ice cream like the astronauts eat for dessert? Our Cover Story comes from David Pogue of Yahoo Tech:

We like meat. But raising the animals we like to eat requires a crazy amount of land, water and energy. And all that meat isn't actually that good for us. Something will have to give.

And maybe we'll take a cue from Megan Miller, who makes things with flour made from ground-up bugs.

Yes, Miller's company, Bitty, sells cookies made from cricket flour. She believes that the future of protein is bugs.

"People all over Asia, Latin America, Africa already eat insects as part of their everyday diet," she said.

Pogue sampled one of Bitty's Chocolate Cardamom Cookies, made with cricket flour (which, he said. "has a very farm-like, organic scent to it").

Pogue asked, "How much crickets are there actually in one of those cookies?"

"Each one of those cookies probably has 25 crickets in it," Miller replied.

And to supply all those insects, there are now cricket farms.

Crickets have almost as much protein as ground beef, but are much quicker to raise than cattle - they mature in just six weeks -- and they require much less land and water.

As Pogue discovered, cricket-flour recipes taste exactly like regular-flour recipes, once you get past the idea that you're eating bugs.


Not all food futurists think bugs are the answer. Rob Rhinehart thinks we won't wind up eating anything -- we'll drink our nutrition.

Rhinehart explained his creation, Soylent, "an engineered staple food. It's something that is designed to deliver the maximum nutrition to your body with minimum effort and cost."

And what's in a glass of Soylent? "Everything the body needs," Rhinehart said.

When he was an electrical engineer, Rhinehart resented the time he had to take away from his work to buy food, prepare it, and then clean up after it. So he invented a drink called Soylent: cheap, nutritionally complete, environmentally sound -- and very bland.

"I did a lot of research, and I collected what would really be necessary for the body to be healthy," he said. "And then tried to package it in a form that's as convenient and affordable as possible."

"Most people think that Soylent is a loaded name for your company and your product," said Pogue. "All I can hear is Charlton Heston from the 1973 movie going, 'Soylent Green is made out of people!'"

"Well, there are no human remains in the product!" Rhinehart said.

"Glad we cleared that up!"

He says they've shipped out three million meals this year.

When you order Soylent, you get a bag of powder, a little bottle of oil, a pitcher, and a user manual. Pour in the powder, add the oil, and fire up the blender - and, Rhinehart said, "You have cooked an entire day's worth of food. Three meals, two thousand calories."

Cheers! Well, as Pogue described it, "it's like drinking blended chemicals and lipids. It's a little gritty."

Now, if you think that powdered bugs and drinkable meals sound a little unappetizing, you'll be happy to hear that the future of food science isn't all quite so radical.

"For regular people, what to cook tonight is a problem," said Adam Rapoport, editor-in-chief of Bonb Appetit magazine. "Watson helps solve it."

At least one new food technology is designed to work with the ingredients we have now. It's the result of an unlikely collaboration between Bon Appetit magazine and IBM's Watson computer -- the computer that beat the humans and won a million dollars on "Jeopardy."

Florian Pinel, the lead engineer on Chef Watson, said Watson is not really a supercomputer any more. "It lives on the cloud."

The magazine's editors fed 9,000 Bon Appetit recipes into Chef Watson's little silicon head. Based on those proven combinations, Watson can now invent new recipes all its own, based on starter ingredients that you specify.

But, Pogue said, "it's software. It is unable to taste anything. Wouldn't that be considered a drawback for a cook?"

"Well, it 's not able to taste anything, but it knows a lot of things about ingredients," said Pinel.

Soon, you'll be able to try Chef Watson yourself on the Web. But for now, only beta testers like Lauren Sandtorv can access it. Her kitchen may be small, but it's got enough room for a culinary supercomputer.

"I tend to use it as a way to say, 'Hey, this recipe can use a little extra oomph,'" Sandtorv told Pogue.

With pork and apples as her inspiration, Sandtorv asked Watson for some "computer enhancement." Chef Watson produced 100 different recipes that involved pork chops and apples.

"Mmmm," said Pogue. "It's complex, it's Thanksgiving-y. It's just a little bit digital!"


While he still had the chance, Pogue tried giving Chef Watson a spin: "I have requested that it give me assistance in making a new holiday mixed drink that has never been made before."