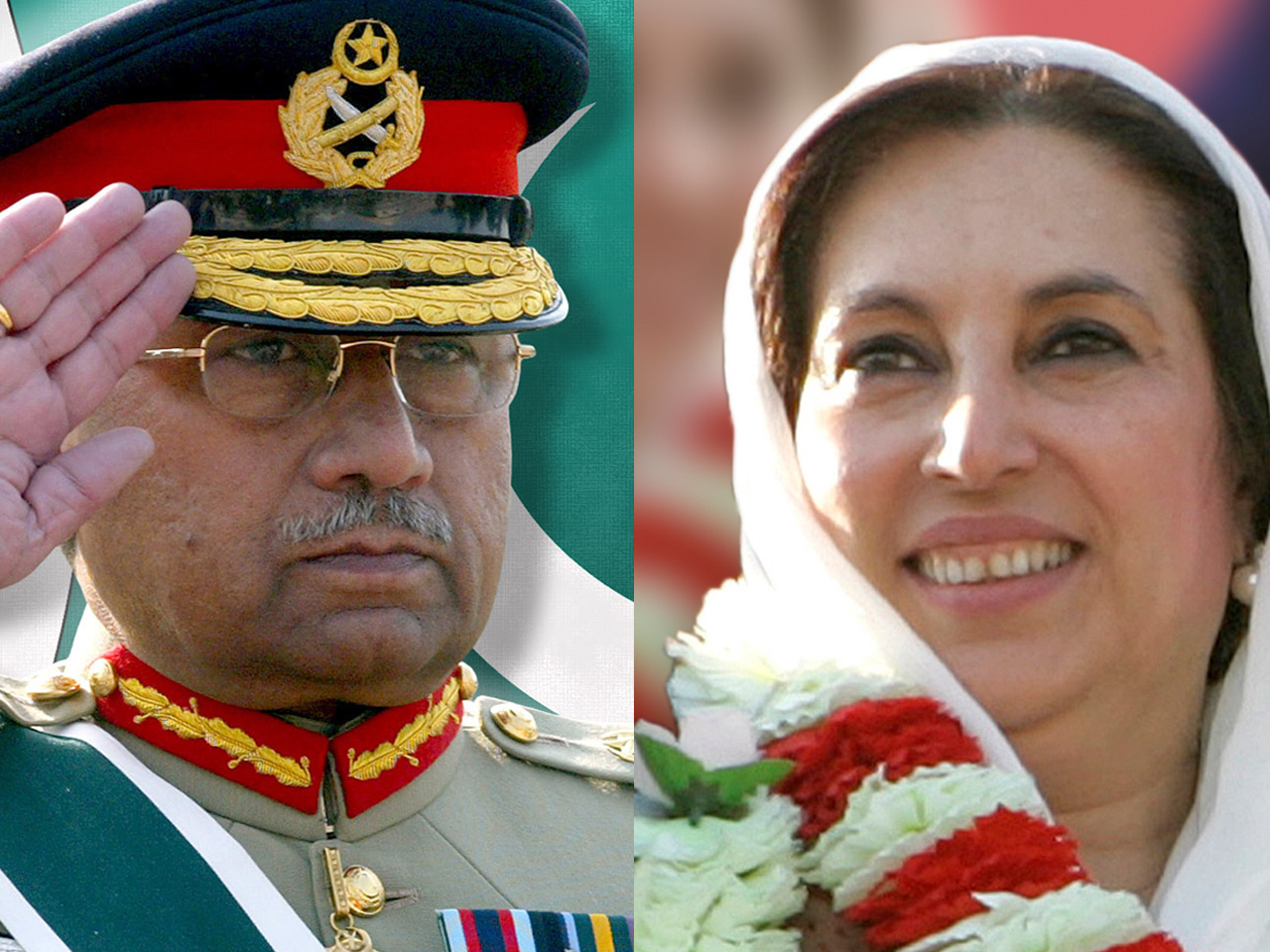 NEW YORK On December 29, 2007, five men sat on a carpet in the house of Hajji Fazul, chief of Ducalam village in the mountains of Afghanistan's Kunar Province, about 100 yards from the Pakistani border. The room was silent as the men watched an hour-long homage to Benazir Bhutto on Pakistani television.

Pakistani Prime Minister Benazir Bhutto had been assassinated two days before in Rawalpindi, three days away from Ducalam by car. Retired lieutenant general Hamid Gul, former head of the Pakistan's military intelligence agency, the ISI, was being interviewed about the attack.

"She came bearing gifts from America," he intoned gravely.

"It's a tragedy that she was killed," said Mallem, a school teacher with a thick black mustache sitting with his back against a wall.

"Musharraf is a dictator," responded Hajji Fazul, in reference to Pakistan's then-military ruler. The other men nodded in agreement. "Her family will take revenge on him," added Fazul.

In 1982, Benazir Bhutto, 29, daughter of former Pakistani Prime Minister Zulfikar Ali Bhutto, became head of the Pakistani People's Party (PPP), the youngest women to lead a major political party in Pakistan. In 1987, she married Asif Ali Zardari. In 1988, at 35, she was elected Prime Minister of Pakistan -- the first woman to lead a Muslim nation. Forced out in 1990, she was re-elected Prime Minister in 1993, survived a coup attempt two years later, but was finally forced out again, this time on corruption charges leveled mainly against her husband, who was called, and still is, "Mr. Ten-Percent" by every taxi driver in Pakistan, for the amount he allegedly skimmed off of every foreign contract while serving in his wife's cabinet.

"I blame General Musharraf and the Army," Asif Zardari proclaimed after his wife's death. "My wife told me that she killed Zia."

According to news reports, following the arrest of Pervez Musharraf, when Pakistani Prime Minister Gilani met with President Bush in the Oval Office, Bush asked why Pakistan hadn't killed Hekmatullah Meshud, the Taliban leader who Pakistan blamed for her death. Michael Hayden, head of the CIA at the time, also blamed Mehsud for Bhutto's death.

On October 12, 1999 General Musharraf, then Army Chief of Staff, was returning to Pakistan on a Pakistani International Airways commercial flight from Colombo, Sri Lanka, when, according to his 2006 autobiography, air traffic control in Karachi, Pakistan's largest city, where his plane was about to land, said that he was being replaced as chief of staff and could not return to Pakistan. The Prime Minister, who ordered the plane to divert to another country, was Nawaz Sharif. The Army staged a coup at the last minute and the plane landed safely.

An hour later, a Pakistani general took Prime Minister Sharif into custody. He was convicted of hijacking the PIA flight and faced life in prison. Crown Prince (now King) Abdullah of Saudi Arabia, which provides oil at a discount to Pakistan, and with which Pakistan is closely allied, intervened with General Musharraf, and he allowed the Sharif family to go into exile in Saudi Arabia for 10 years, if he promised to stay out of politics.

On June 6, 2001 General Musharraf formally appointed himself President of Pakistan.

On Sept. 11, 2001, when al Qaeda attacked the U.S. in New York and Washington, Pakistan became a frontline state in President Bush's "war on terrorism."

"Either you are with us... or you're with the enemy," Bush declared. President Musharraf, whose nation was allied with, and was one of three nations to give diplomatic recognition to the Taliban, switched sides and allied his government with the U.S.

In 2006, Sharif traveled to London to be with his son, who was said to be seriously ill. Once there, he began to plot his comeback to Pakistan.

In June 2007, Islamist militants took over Islamabad's Red Mosque and killed the senior military officer on the scene. Musharraf, increasingly unpopular in the country and opposed vocally by political parties which wanted to restore democracy, ordered Army commandos to attack the mosque. At least 87 people were killed, solidifying his support among military officers -- his most important constituency -- and gaining the support, for the moment, of political parties, and of Benazir Bhutto.

By then, however, the U.S. was pushing for an arrangement whereby President Musharraf would give up his military title, yet remain president, and Bhutto would return and become Prime Minister.

Musharraf signed an order granting amnesty to former and twice-elected Prime Minister Benazir Bhutto, and to other political leaders -- except Nawaz Sharif -- on corruption charges, allowing her to return to Pakistan after nine years in exile. The next day he won a controversial parliamentary election to become president.

In February 2008, general elections were held in Pakistan and Benazir Bhutto's party won the most votes. Musharraf declared that a new "era of democracy" had begun in Pakistan. By August, Bhutto's Pakistan People's Party and Sharif's Pakistan Muslim League declared that they would force impeachment of Musharraf for his 1991 coup and for suspending the constitution in 2007.

He resigned office and in November, went into exile in London and then onto the lecture circuit, and in 2010, dreaming of returning to power, formed a political party, The All Pakistan Muslim League. On March 24, 2013, he returned to Pakistan, like Bhutto and Sharif before him, from exile hoping to run for office.

He was quickly disqualified from running for office and in April was placed under house arrest for his 2007 actions against the Supreme Court.

On June 5, Sharif was elected for the third time as Prime Minister. On June 24, Sharif rose in Parliament and said that Musharraf should be charged with high treason.

This week, he was instead indicted on charges linked to Bhutto's murder.

Musharraf violated the constitution twice, Sharif argued, by overthrowing an elected government in 1999 and putting everything into jeopardy, and by sacking judges and imprisoning them.

According to an article published March 24 in Pakistan's Express Tribune -- the day Musharraf returned from exile -- representatives of the Saudi royal family, Musharraf and Sharif had agreed that Musharraf would be allowed to return from exile and that Sharif would refrain from causing him trouble.

There are a great many people who believe Musharraf was involved in the death of Bhutto. She was almost assassinated in Karachi, shortly after she arrived, but she survived the bomb attacks. Scores did not. The second time, her assassins succeeded.

Yet others in Pakistan, who are anxious to believe in conspiracy theories, feel that her husband, Asif Zardari, had the most to gain by her death. He became president, after all, they say. Benazir Bhutto's niece, Fatima Bhutto, a prominent journalist, alleges that Zardari killed her father, Mir Murtaza, Benazir's brother and political rival, who died in a shoot-out in Karachi.

But what will happen to Musharraf? As Hajji Fazul said, Bhutto's family will want revenge. And so, too, does Prime Minister Sharif. But Musharraf has an ailing mother. Maybe he will be allowed to leave, after he has been sufficiently humiliated by his enemies, to be with her.

Saudi Arabia, where Musharraf went on a religious pilgrimage after he went into exile, will step in, probably, to protect him.

"Pakistan is the murkiest country I've ever worked in," remarked U.S. Ambassador to Pakistan Ryan Crocker in April 2007, on his last day before leaving to become U.S. Ambassador in Iraq. It remains so today.