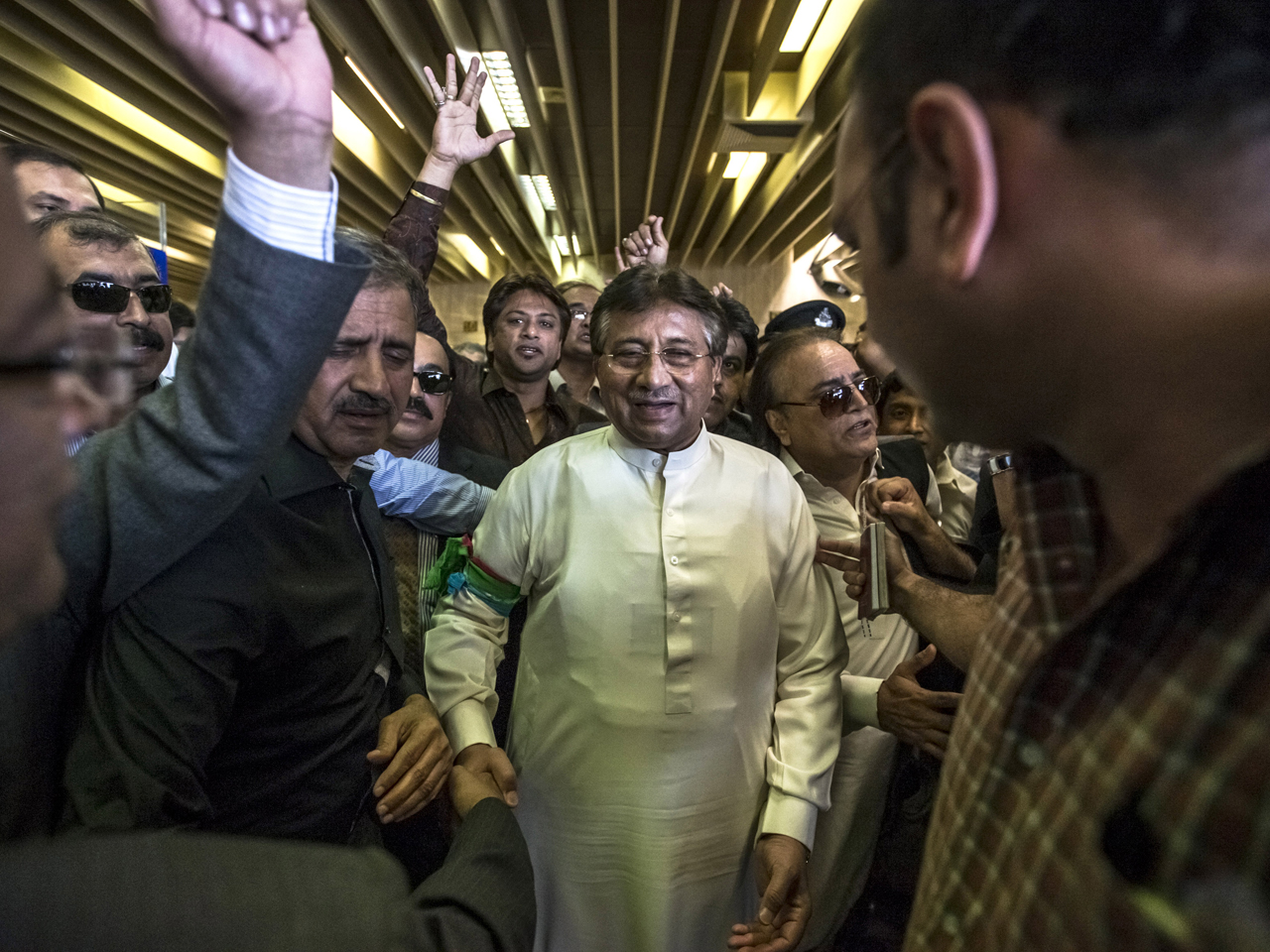 KARACHIPakistan's former military ruler General Pervez Musharraf on Sunday vowed to defy the odds when he set foot on his South Asian homeland, trailing a Taliban threat to kill him.

The former four star general and military commando, who rose to global prominence as a key U.S. ally and spent more than four years in exile, began his homecoming with a promise to never return to exile.

"I will now remain among you. I am back to serve my country," said Musharraf to the applause of roughly 1,500 followers from the All Pakistan Muslim League (APML) political party that he created. By Pakistani standards, the crowd size was small, according to political analysts.

Dressed in a shalwar kameez, the baggy traditional trousers and tunic, Musharraf rebutted his critics, including many who claimed till the last moment that he will abandon his plan to return.

"I am here in spite of so many people saying that I will not come. I am here for my country, for Pakistan," he told his followers, who in turn showered him with rose petals.

For many Pakistanis, Musharraf's return brings an important historical reminder accompanied by the threat of an increasingly uncertain future.

In sharp contrast to Pakistan's role as the only Muslim nuclear-armed country, almost one-third of Pakistan's army remains deployed in the region bordering Afghanistan to battle a stubborn Taliban Islamist insurgency. Some Pakistani officials who have spoken to CBS News have warned in private conversations that the insurgency may gather further momentum after a planned draw down of U.S. troops in Afghanistan by December 2014.

It was in the city of Karachi almost 14 years ago that Musharraf, as the chief of Pakistan's army at the time, stepped into the limelight when he seized power in a 1999 military coup.

At the time, a U.S. official predicted that Musharraf will soon have to return Pakistan to civil democratic rule or face the "uncertainty of international reaction. He (Musharraf) will find himself soon sinking in quicksand."

The first reaction from Pakistan's Western allies was built upon the threat of punitive economic sanctions in reaction to the coup. But his nine year rule ended in 2008, largely supported by generous U.S. economic and military assistance after Musharraf abandoned Pakistan's ties to the Taliban regime in Afghanistan and became a U.S. ally in the war on terror following the 9/11 attacks.

For former U.S. President George W. Bush, Musharraf became the lynchpin to leading Pakistan's army led campaign against al Qaeda and the Taliban in the country's restless region along Afghanistan.

Yet, Musharraf became a favorite target for Islamic hardline groups, notably al Qaeda and the Taliban, for his alliance to the U.S. In December 2003, he survived two assassination attempts later found to have been carried out by the Taliban.

Just a day ahead of his return on Saturday, the Taliban released a video message promising to send a "death squad" to kill Musharraf.

"The mujahedeen of Islam have prepared a death squad to send Pervez Musharraf to hell," warned Adnan Rashid, a former Pakistan air force employee convicted in one of the attacks targeting Musharraf in 2003, according to a Pakistani intelligence officer who spoke to CBS NEWS on condition of anonymity.

After his arrest, Rashid escaped a Pakistan jail in a daring prison break carried out by the Taliban.

While Western diplomats warned that Musharraf faces a major risk to his personal security, many among the crowd who gathered at Karachi's airport openly exhibited nostalgia for Pakistan's economic recovery during Musharraf's rule.

"When President Musharraf led our country, there were jobs and people were investing in increasing amounts," said Iftikhar Janbaaz, a Karachi college teacher who turned up at the airport.

Armed with a bag full of rose petals that he showered upon Musharraf, Janbaaz told CBS News: "Pakistan has only gone downwards since president Musharraf left us. I am glad he is back to serve our country".

A Western diplomat who spoke to CBS News from Islamabad on condition of anonymity said the former military ruler faces an uncertain future: "I think its too early to predict if Musharraf will become a key player in Pakistan's politics. As head of the army, he (Musharraf) had half a million men from the Pakistan army at his command. Now that's all changed."

During Sunday's homecoming speech, Musharraf promised to rebuild Pakistan to where the country stood when he left in 2008 - an apparent reference to his legacy of a building up the economy in the developing country of 190 million.

But the diplomat who spoke to CBS News said: "For the moment, this homecoming may have brought him (Musharraf) back to an uncertain future. For many Pakistanis, it's still too early to tell if Musharraf will be their savior."