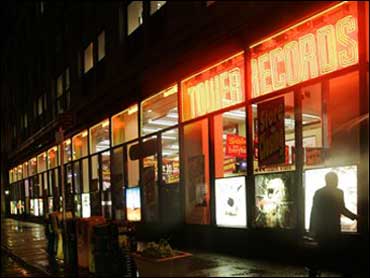 The news that Tower Records is going the way of, well, records struck a dissonant note with customers as they learned that the 46-year-old music retailer has been sold to a liquidator that will close all the stores.

"I feel very sad about it," said Ladd Fraternale, shopping in the country section at Tower's East Village store in Manhattan this week. "I think they have a great selection here and the service is good."

While no firm date has been set for the stores to close, "Going Out of Business" signs went up this week at Tower's 89 stores in 20 states, and the chain's 3,000 employees have been told they will be laid off.

The company owes creditors about $200 million and filed for Chapter 11 reorganization in August. In its filing, Tower said it has been hurt by an industrywide decline in music sales, downloading of online music and competition from big-box stores such as Wal-Mart.

CDs were 10 percent off this week, still not a bargain. At 10 percent off the list price of $18.99, Beyonce's "B'day"" was selling for $17.09, compared with $9.99 on Amazon. Great American President Andy Gumaer said the discount will increase over the six to eight weeks it takes to close the stores.

Kirwan said taking music off the Internet is not the same as buying a vinyl LP or even a CD.

"It's something real that's not virtual," he said. "It's like music itself. I'm not sure music is virtual. It's real and it's powerful, and I don't think you quite get the same thing from downloading."

Russ Solomon founded Tower in Sacramento, Calif., in 1960 and opened the company's landmark store on West Hollywood's Sunset Boulevard in 1969. As part of the bankruptcy auction, the Sunset property will be sold for $12 million.

Outside the Sunset Boulevard store, a marquee with a message and REM lyrics said it all: "It's the end of the world as we know it. Thanks for your loyalty." A mock gravestone and Halloween decoration had a single word scratched into it: "Tower."

Norman Labby, who for 20 years drove across town to go to Tower for jazz and classical albums, said he was "frustrated, angry and depressed" that Tower was closing.

"I don't own a computer, I don't know how to work one, and I don't plan to buy one," he said, holding a bag full of CDs and tapes. "I'm disenfranchised for the umpteenth time."

"Business hasn't been great," Jones said. "Downloading, competition from Virgin and your Best Buys and your Wal-Marts. But the thing that people will miss is the deep catalog that Tower has. They can come here and find anything they want."

Jones, a 15-year Tower employee who also plays the drums and has worked with musicians including Vernon Reid of Living Colour, said he has made connections at Tower and met famous customers like Carlos Santana and jazz great Ornette Coleman.

"Customers are going to miss walking into a store and speaking to someone that is knowledgeable," he said. "It's like losing a family member, working here for so long."

Rock critic Robert Christgau said Tower often attracted workers who knew about music because they were musicians themselves.

"It doesn't make me happy to see places like Best Buy and Circuit City selling records," he said in a telephone interview. "I'd much rather records were sold at a music store."