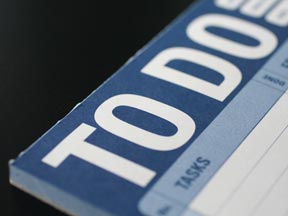 When you run a small business it's easy to get sidetracked by queries and requests and, well, stuff.

It's also easy to rationalize spending time on all that stuff. After all, today's casual questions could someday result in tomorrow's business; networking is incredibly important and you never know when even the most remote connection could pay off; building a tribe (whatever that means, apologies to Seth Godin et al) is critical in today's business world; and being nice is its own reward. (Definitely agree with the last one.)

But getting sidetracked is a killer in a small business. So let's look at one example of how to stay focused.

Here's how to approach prioritizing and handling something simple like email:

Priority 2: People fairly likely to pay you in the near future. Solid prospects, serious inquires... respond quickly but try not to be a pest. Aggressive and assertive works for some, but for most people it doesn't.

Priority 3: People who used to pay you. Past customers should get plenty of attention.Besides, many of your old clients may now be friends.Check in occasionally, especially when you find something you think a past customer  can benefit from.  That's a great and natural way to stay in touch.

Priority 4: People who say nice things. Responding to a compliment with a "thank you" takes seconds. If someone says something nice, make sure they hear back from you right away.

Priority 5: People who say not-so-nice things. Take a little longer to respond so you reply thoughtfully. No one is always right -- and that includes you and me.

Priority 6: People who ask good questions. Most people like to help people when they can. Almost never do those exchanges result in actual business, but that's okay. Answer when you've run out of steam for "real" work or when you're watching TV. (Laptops weren't invented for business travel; laptops were invented so we can sit on the couch and watch a little TV while we write emails and rationalize we're being productive.)

You can apply this approach to just about any business situation.Think of all the stuff you currently do, and then reset your priorities.

If you're in doubt, here's a simple question to ask yourself: Does this directly generate revenue?

If not, move it down the list.
View CBS News In
CBS News App Open