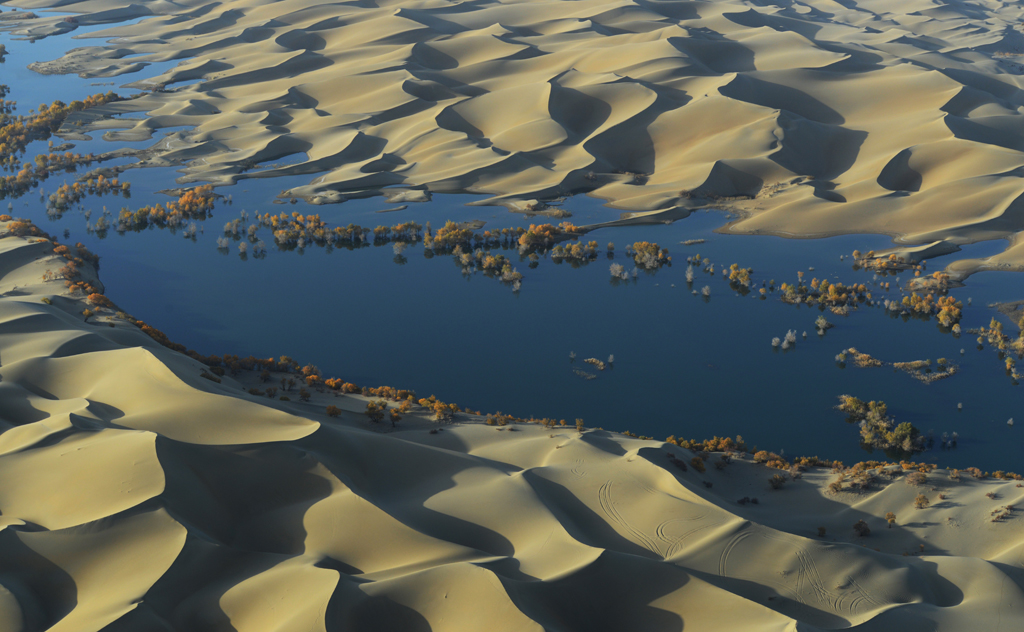 For several decades, scientists have been searching for about a billion tons of carbon dioxide generated from the burning of fossil fuels.

Of the roughly 11 billion tons of carbon produced each year, it has been estimated that more than 5 billion remains in the atmosphere. Another 3 billion is stored in the oceans. The rest of it, it seems, is sequestered in tropical and northern forests, but there's some -- perhaps a billion tons' worth, perhaps even more -- that can't quite be accounted for.

Scientists have struggled to explain the "missing carbon sink," with some arguing it's actually in the forests after all, and others believing it's elsewhere.

Now, an international team from the United States and China is suggesting there is another possible repository for some of this missing carbon: below the deserts of the world.

In a paper in the Geophysical Research Letters, a journal of the American Geophysical Union, the scientists contend that massive aquifers underneath deserts could hold more carbon than all the plants on land. Thanks to agriculture in these areas, they estimated these underground deserts aquifers are storing 14 times more carbon every year than previously thought.

"The carbon is stored in these geological structures covered by thick layers of sand, and it may never return to the atmosphere," said Yan Li, a desert biogeochemist with the Chinese Academy of Sciences in Urumqi, Xinjiang, and lead author on the study. "It is basically a one-way trip."

The idea of deserts as carbon sinks has been suggested in the past. Some scientists have argued that the carbon was taken up by desert plants and transferred deep into the root system where it remains. But that was controversial due to the lack of plants and the poor state of soils.

To test their aquifer theory, the authors of the new research examined the flow of water through the Tarim Basin, a Venezuela-sized valley in China's Xinjiang region. Farmers on the edge of the desert are supported by water draining from rivers in the surrounding mountains.

They found a complex process, whereby the amount of carbon dioxide dissolved in the water doubles as it filters through irrigated fields. They also found that carbon dioxide in the air was being absorbed by the desert crops through the plant's roots and that microbes add carbon dioxide to the soil when they break down sugars in the dirt.

Although this process of carbon burial occurs naturally, the scientists estimate that the amount of carbon disappearing under the Tarim Desert each year is almost 12 times higher because of agriculture. The amount entering the Tarim Desert increased significantly about 2,000 years ago, when the Silk Road opened and farming began to flourish.

After the carbon-rich water flows down into the aquifer near the farms and rivers, it moves sideways toward the middle of the desert, a process that takes roughly 10,000 years.

And over its history, the desert has been a huge and long standing carbon sink. The study's authors estimate that over its lifetime, the desert has held an aggregate 22 billion tons of carbon, dissolved in an aquifer that contains roughly 10 times the amount of water held in the Great Lakes.

R.A. Houghton, a co-author on the study from the Woods Hole Research Center whose expertise is in land use and carbon cycles, said the findings could help produce better climate models into the future and force scientists to rethink the idea that increased emissions were leading to greater growth rates in forest, and thus, more carbon being stored in them.

"If you are proposing a mechanism to explain the carbon sink, you have to have a process that is increasing over time," Houghton said. "So, what is neat about this study is that they propose this increasing sink in these desert brines is due to agriculture. The sink is getting bigger as we irrigate."

While the study could help solve the mystery of the missing carbon, Houghton warned against using the findings to justify increased farming in arid regions as a benefit to the climate.

"Many places in the world are drawing water from clean aquifers. It's not being replaced," Houghton said. "So once it is used up, what do you do to keep all that land watered?"