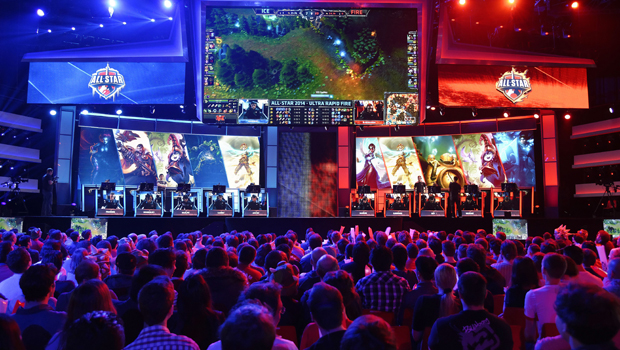 In Anaheim, Calif., 5,500 excited fans cheered and gasped, watching on a giant screen as two players battled for the world championship of the video game Starcraft II.

"It's like the Super Bowl for us," said Lauren Mihalus.

At Chicago's Ignite Gaming Lounge, crowds lined up before midnight, not to play video games, but to watch the League of Legends world championship being played half-a-world away, in South Korea.

And in Seoul more than 40,000 people packed into a stadium to watch the games live. It was in South Korea that video game competitions, called eSports, first exploded as spectator sports.

"I'd go there and they'd have these huge ballrooms, all these young people all excited about these young players that were becoming celebrities," said Paul Sams. He's the COO of Blizzard, the company that created Starcraft, the game that launched esports in Korea and made stars of the best players.

"And you're like, 'Who? What? This is crazy! These people are following all these young kids that are playing videogames, and they've got these huge followings, and they're signing autographs.' And it became really evident to us that this was the beginning of something big."

But would this Asian phenomenon translate to America? Last year, the League of Legends championship was held in Los Angeles at the home of the L.A. Lakers. It was a sellout.

"I think I'm too old to understand what's going on in online gaming right now," said Blackstone to Michael Pachter, who studies the video game industry as a research analyst at Wedbush Securities.

To which Pachter replied, "You probably are."

"Well, I have to say, my wife can't understand people watching a golf game, because she's not a golfer," said Pachter. "So if you're not a gamer, that's not gonna appeal to you.

"When you're into something -- like a game like League of Legends, which has 93 million monthly unique players -- there are a lot of people among those 93 million who want to watch the best people in the world playing the game."

The company that makes League of Legends says that 27 million people watched this year's championship. To put that into perspective, the World Series, which started later that same week, averaged just under 14 million viewers.

Video games now bring in $71 billion in annual revenue -- more than the music business, and fast catching up to Hollywood.

Amazon sees such potential in eSports that it paid nearly a billion dollars for Twitch, a social network that allows users to watch and stream video games live. Most nights, Twitch viewers outnumber those of many cable networks.

Thirty-one million Americans watched eSports last year -- up from fewer than 2 million in 2010.

It is, says Mike Sepso, co-founder of Major League Gaming, "the first sport that has gotten commercially successful outside of television."

Major League Gaming is what some call the NFL of the professional gaming world. At their brand-new arena in Columbus, Ohio, teams competed for $50,000 in prizes, as more than 100,000 watched online.

"Our typical viewer is a young guy, generally 16 to 24, maybe a little bit older," said Sepso. "He's an active gamer, who's just sort of a typical, you know, all-around American kid."

Like a lot of other all-around American kids, Matt Haag spent so much time playing video games his mother tried to stop him. "She didn't know at first, but I had extra controllers up inside the room. And I loved doing it so much, sometimes I'd be a rebel and sneak back on at night. But then she kind of wizened up over the years, and she figured out, 'Well, he's go extra controllers, I'll take the power cord!'"

Now 22, Matt is a professional gamer, known as Nadeshot. He is so good he made nearly a million dollars last year playing Call of Duty.

"I remember the first tournament that I won was this little online tournament, and we won about 50 bucks," he told Blackstone. "And I went downstairs screaming, like, 'I did it! I finally made some money!'"

He practices hours a day, as legions of devoted fans watch his training sessions online. He also has a lucrative contract with Red Bull, the energy drink company that sponsors athletes like Olympic skier Lindsey Vonn.

Does Haag consider himself an athlete? "I'd not compare myself to, like, Kobe Bryant or Calvin Johnson or anybody like that. We're not in that league. But we definitely have something that takes an equal amount of time to practice, and skill, for sure."

To hone those skills, this summer Red Bull flew Matt and his team to California for a month of real-world training.

Blackstone asked Andy Walshe, who runs Red Bulls' athlete development program, "At some point somebody came to you and said, 'We want you to start working with gamers.' Your guys work with Olympic athletes. Did you say, 'Hang on a minute here'?"

"No, I was actually the opposite -- I was really excited," replied Walshe.

Red Bull trainers put Matt and his team through the kind of intense physical workouts they do with other elite athletes: strength training, aerobics, even yoga. Red Bull hooked them up to sophisticated brain scanners to measure the stress while their playing.

When asked if he thought playing video games could be described as a sport, Walshe said, "Absolutely. You're performing at such stress loads and under such sort of stringent conditions, competitive conditions, that we call that athletics here."

Back in Anaheim, 25,000 showed up for BlizzCon, the annual convention of game company Blizzard. Competitors playing Blizzard games battled for a share of $750,000 in prize money.

"It's a lot, I'm still barely settling in that that's real," he said.

"Did your parents, anybody ever tell you you were wasting your time?" asked Blackstone.

Blizzard's Paul Sams believes eSports are going to continue to get bigger.

"Is there a time that we'll look at eSports perhaps like NASCAR?" asked Blackstone.

"I certainly hope so," replied Sams. "It's just so engaging. It pulls you in, and you find yourself rooting for these people, even if you don't know exactly what's going on."