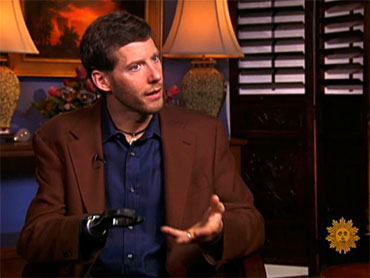 Sometimes life presents us with terrible choices. But few of them are as difficult or dramatic as the one Aron Ralston had to make. Serena Altschul has his story:

It's a movie that's "based on a true story," an unthinkable ordeal, one unimaginable act.

"A lot of people are gonna walk into this film knowing it's about the guy who cut his arm off," Aron Ralston said - and he's the guy. And he says no one's more surprised to tell his story than he is.

"This is something I would not have believed that I was capable of doing. If you had told me eight years ago that I would do this, I wouldn't have believed it."

Nor believed how it would change his life.

On April 26, 2003, Ralston, a 27-year-old mountaineer and outdoorsman, set out on a day of adventure in remote southeast Utah, alone and without telling anyone where he'd gone.

What happened at 2:41 on that Saturday afternoon - and in the five-and-a-half days that followed - is the directed by Academy Award-winner Danny Boyle ("Slumdog Millionaire").

"I dislodge - I pull - a large, like, 800-pound rock loose, that falls with me and eventually traps my right hand against the canyon wall. Kind of like being stuck in the bottom of a well, essentially, but in the middle of a very remote wilderness," Ralston said.

He had only a liter of water, and no jacket. "I didn't have plans to be out overnight," he said.

But he was out overnight - five nights in all - 127 hours between a rock and a hard place (the name of his book).

In the earliest hours, he shouted for help. A big mistake, Aron says.

"The sound of my voice just dissolving into the emptiness in the canyon was so frightening to me," he said. "I took myself to the edge of terror by shouting … I told myself, 'You can't scream for help anymore. You have to keep it together. Don't lose it.'"

Ralston says it wasn't long before he realized he faced an almost unfathomable choice.

But Ralston had a big problem: a bad knife.

"I'm stymied. I'm gonna die there. Not so much because of the boulder holding my arm but because the knife is too dull to cut through the bone, really."

In the film, Ralston's character is played by James Franco, an eclectic actor whose movie roles have ranged from Spider-Man's best friend to the lover of gay rights pioneer Harvey Milk.

"When I first met Aron, he asked me why I wanted to play him," Franco recalled. "One thing I said was, "I think it's very interesting to see a human taken out of his environment and really forced to see what he's made of. And Aron didn't like that answer. He said, 'Well, thank you, but actually one of the things that really drove me was my connection to my loved ones.'"

Ralston kept a sort of video journal during his ordeal.

"Mom, Dad, I haven't appreciated you as I know that I could. I love you guys and I'll always be with you," one excerpt said.

"He doesn't show them to a lot of people," Franco said. "But we were very lucky … fortunate … to have him show them to us. And yeah, they were very, very powerful."

"I was saying goodbye. And I was divvying up my possessions," he laughed. "I was giving the death watch updates.

"It was very emotional for my mom to watch that, when I shared it with her, and my Dad," Aron said. "And several of my friends. And yet they're reproduced with such authenticity in the film."

It was the thought of being reunited with his family that kept him going.

"Because I could have just as easily taken that knife and … and cut myself so I bled to death … and committed suicide. I thought about that. But I resolved I was not going to do that.

"And they pulled me out of there."

"I finally figured out the puzzle, really, of how to get myself free, which entailed breaking my bones and then cutting my arm off, rappelling a 60-foot cliff, and then hiking seven miles, before ultimately I was rescued by a helicopter that my mom had done so much to initiate a search and rescue operation."

It might not surprise you to learn that, seven years later, Ralston is a motivational speaker.

He's married, with an infant son.

His experience poses the inevitable question: Could I do this?

"Yeah, I think it's the typical, you know, human response, is of empathy," Ralston said. "I think it was the act of the amputation that grabs us all, like, "Wow, I mean, he did that. That's crazy." But really it was a very simple thing, like, "I'm gonna do what I have to do in order to get back to the people who are important to me."