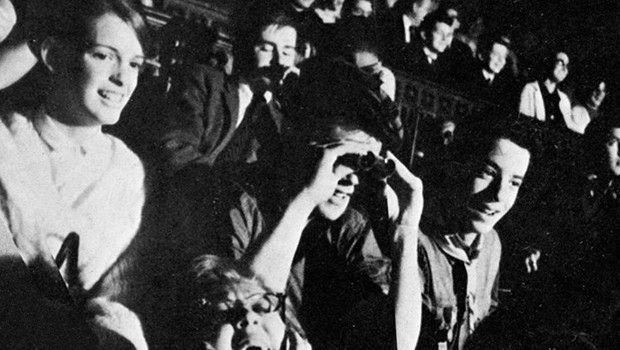 Starting my life as a teenager, on Sept. 12, 1963, I finally had my bedroom in Brooklyn equipped with my own portable B&W television set. It was positioned on my bookshelf over-looking my desk so I could always write (we did that back then) or type on my manual typewriter (later electric) while watching my television programs. I also had the hardship of having to get up to change the channels on the TV set because I didn't have remote control capabilities; my father had that in the living room on the bigger color set with the round tube.

By this time I took ownership of my father's Webcor reel-to-reel audio recorder, which I had rigged to the speakers of the television set. Those were the days when televisions didn't have outputs or inputs for adding speakers to your set. I wanted a clean audio recording off the television, and not by the usual microphone, because if someone was talking in the background it would screw up the sound.

A good deal of my allowance went to buy comics, baseball cards, candy and especially magnetic 7 inch reels of recording tape. I became obsessed with taping my favorite television and news shows. It was still almost twenty years away from the introduction of videotape recorders. I even audiotaped every special on television by Walter Cronkite related to the Space program. This included recording every Project Mercury, and soon Project Gemini and Project Apollo flights.

I was still too young to have girls influencing my life. I'd rather have been riding the range alongside Hopalong Cassidy, Roy Rogers and The Lone Ranger. Every kid in America owned a gun ... a toy gun, that is. There were over 32 Westerns on TV back then and just about as many detective shows like 77 Sunset Strip, The Untouchables, Naked City and  Hawaiian Eye among others. If you were a typical pre-teen viewer you had to have a Have Gun Will Travel or Wanted Dead or Alive gun set to role play with your favorite shows.

My friends and I all had our personal heroes at the time; some looked up to baseball players, politicians, actors, filmmakers, and musicians. My sister and her friends had pictures of singers like  Frankie Avalon. He teamed frequently with Annette Funicello, Avalon starred in a number of popular "beach party" comedy films during the mid-1960s. The wholesome and romantic coupling of "Frankie and Annette" in summer movies such as Beach Party and Beach Blanket Bingo became iconic figures in American films during that era. As for music, I still was a fan of short hair singers like Bobby Rydell, Frankie Valli, my parents' favorite Andy Williams, Harry Belafonte at Carnegie Hall and anything Frank Sinatra.

My 1964 is best remembered for Feb. 9, 1964.  A Boy Scout buddy named Joel Armel had written a year ahead of time for tickets for our Troop 202 of Kings Highway, Brooklyn, to attend a live Sunday variety program on CBS called “The Ed Sullivan Show.” What we didn't know until the week before was that the Beatles would be making their American debut.  I had no idea who they were.

What a night! Music wasn't that high on my schedule, but boy, those girls did like to scream at the Fab Four. There were lots of photographers in the balcony where I was seated and they were taking pictures of the screaming girls, and now me. I have a Beatle magazine with a picture of me in my Boy Scout uniform in the balcony of the theater.

A short time later I owned a set of Ludwig drums (which were kept in the basement) just like Ringo Starr. I remember once getting yelled at by my father for going out and wasting all my money on a Beatles wig when I should have bought my mother a birthday gift instead. I know you're thinking that if I had the wig today it would be a collector's item. But in fact not, as I took it out of the packaging, and was curious what I would look like with longer hair. Today they looked like Tribbles, the pets from “Star Trek.”

Ira Gallen is known worldwide as a film & television historian who has spent over 40 years collecting and restoring over 40,000 film, television shows and commercials from the Golden Age of television. His findings can be viewed at the Paley Center in New York and on his website TVDAYS.com. His Nostalgia E-Books include "Confessions of a Baby-boomer," "Television Toy Stories" and "Inventing Television."