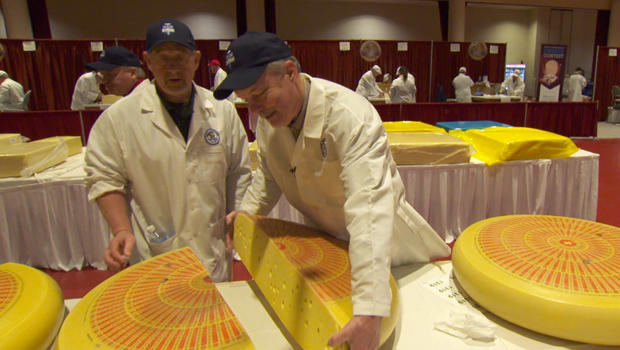 This cheesy story takes place in the cheesiest state in the union, Wisconsin, and it begins in the town of Thorp, where you can't miss the Penterman Farm. Marieke and Rolf Penterman's dream farm is where their five children run free, and their 400 very content dairy cows have names, like Loretta.

The Pentermans immigrated from Holland and never looked back, except that Marieke missed Dutch cheese, specifically gouda. She told correspondent Martha Teichner: "One evening I was tossing and turning, and I'm like, 'Hmm, we have the good Wisconsin milk right here on the farm.' So I woke up my husband, I said, 'Hey Rolf, I think I know what we should do – I think we should start making our own gouda.'"

Which is exactly what they did.

Just four months after making those very first cheeses in 2006, to her amazement, Marieke won an award. And then, in 2013, one of her aged goudas won Best Cheese in America at the U.S. Cheese Championship – a huge deal, with immediate dividends.

"My immigration lawyer called and he says, 'Marieke, I think we could see how the extraordinary ability route would go.'"

Right up there with Nobel Prize winners and movie stars, the Extraordinary Ability Visa only goes to people whose achievements are internationally recognized. "He thought, 'Well, you just became the Best Cheese in the United States,' and we got approved, and that's how I also got my green card," Marieke said.

Yes, a green card for cheesemaking!

Her business now makes 330,000 pounds of cheese, and welcomes 150,000 visitors to the farm each year. Her walls are lined with awards, so if there's anyone who knows the value of winning them, it's Marieke Penterman.

Teichner met with Marieke at the 2018 World Championship Cheese Contest in Madison, Wisconsin. When asked how many cheeses she had in the competition, she said, "Well, if you don't tell my husband, we have about 30!"

"I'm super-excited, yeah. I mean, this is what I kind of live for!"

This competition is the granddaddy of them all, with more than 3,400 entrants from 27 countries, competing in 121 categories, some pretty esoteric, such as Best Surface (Mold) Ripened Mixed Milk Cheeses.

"This has got a particular yeast on it called giotriptem candidum," one judge said.

Teichner asked one judge, "How many cheeses can you taste in a day without having no taste at all?"

"You can taste as many cheeses in a day, that doesn't matter; it's your MIND that you need to keep control of!" he replied.

Imagine a cross between a wine-tasting ("It's got mint notes") and a dog show, and you get a sense of what this three-day event is like. They take their work very seriously. That cheese that contains corn starch? "That's not legal," a judge sighs.

In theory, these cheeses are the best of the best – which is why a black cheese confounded the judges. "Have you ever seen cheese like this? We haven't!" said Robert Aschebrock, chief judge at the competition. "No one could tell me what this is."

Aschebrock explained the judging: "We start at 100 points on cheese, and then we start deducting, [like the Olympics]. Flavor is the priority. Lot of these classes are decided by one-tenth of a point."

Knowing that, Marieke Penterman watched as her cheeses were judged.

In Wisconsin, cheese judging is a spectator sport, and sampling is definitely part of the attraction.

So, how do judges endure dozens of blow-your-head-off, hot pepper cheeses? ("Whoa!!!") There's a trick: After each one, they drink half-n-half.

Just imagine these judges tasting their way through thousands of cheeses in two days. These guys really love cheese. "At the end of the day, what we really want the most is a cheese sandwich!" one judge joked.

In the final round, on Day 3, judges were looking for a champion, among the Water Buffalo Milk, Open Class Hard Cheeses, and Mild Gouda. They narrowed the contenders down to 20. "It's like poker, watching people's faces," one judge said.

Would a made-in-America cheese – a Wisconsin cheese – be named best in the world? Actually, no; Esquirrou, a sheepsmilk cheese from France, won.

Marieke Penterman came away with five awards – hardly cheesy! But for a woman who's already won Best Cheese in America, Best in the World would be an awfully nice next step.