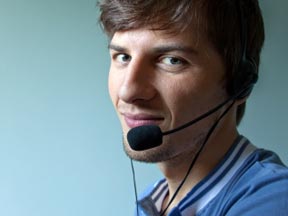 In a recent post I talked about how sales training and sales strategies can often do more harm than good, especially if following that advice takes you away from your strengths.

I just read your short article on sales technique. You mentioned a "kid" at a Mercedes dealership who said, "I suck at this. Let me get you someone who knows what he is doing." Your wife then pulled him right back into the sales situation.

The kid may well have been struggling. On the other hand he might have been extremely well trained. He may have used a technique frequently referred to as a "negative reverse." Psychologically, a negative reverse can be highly effective. While not infallible, it works so often that -- depending on your point of view -- it is surprising, wonderful and baffling.

Here's how the negative reverse works, Turner said. A salesperson engages a prospect in a conversation, even just a canned sales routine. After a few questions and answers are exchanged -- and especially if the prospect seems to be leaning away from the deal -- the salesperson can do something totally unexpected. She can take a position that is surprising, unexpected and tends to throw the prospect off his game of hide and seek -- just like the salesman in your example did, Turner wrote.

He said he sucked and offered to bring in another salesman, and in response your wife re-engaged, Turner said.

Most of us like to help people in trouble. It's our nature. So what do we do when we see someone in trouble? We tend to help them out a little. The negative reverse -- whether intentional or unintentional -- brought the salesman right back into the game.

Another approach is to say, "I'm sorry. I don't think I can do this. Would you like me to get someone else?" It's the same approach only in the form of a question, noted Turner.

In actuality, the words themselves are carefully chosen. In sales terms, "I'm sorry" is known as a softening statement, Turner wrote. "You can imagine many others. I have been taught -- and have taught others -- to lower my voice, speak softly and apologetically, lean in toward the prospect...and then ask a question that is designed to get the prospect to pull me back in."

So, this kid was either a green rookie or was well trained and on his way to becoming a real pro, Turner said.

I recognize some people might think of this as a trick of some sort, but it is not. A negative reverse is merely a way to keep the prospect engaged with the speaker so the the prospect zeroes in on them and not someone else.

Even when our level of interest is extreme, we still don't want to be "sold," Turner said. We want to be "allowed to buy without pressure."

There's a huge difference, so the key is to engage prospects on their terms so they can make a purchase decision on their terms. Great salespeople don't force a sale; they find ways to help clients choose them as the person to solve their problems and meet their needs, said Turner.