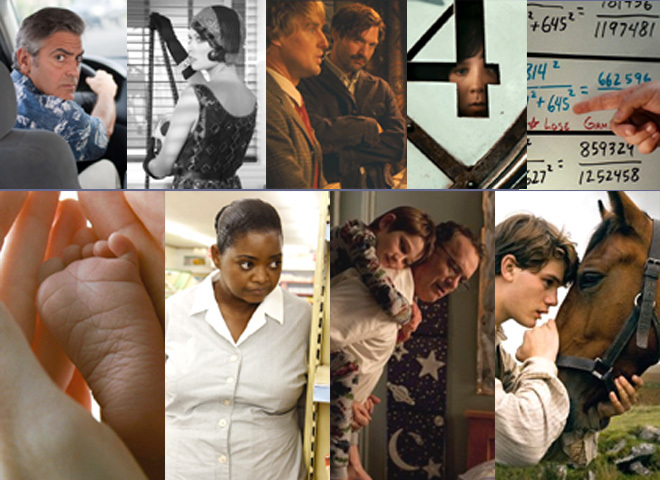 Nine films are up for the Oscars' highest honor Sunday, when the 84th annual Academy Awards are presented in Los Angeles.

For detailed overviews of each nominee and its making, click on the photo galleries below.

Reproducing silent film language to tell a story about silent pictures, "The Artist" both focuses on an intimate story of a man's prideful fall and fight for redemption, and on the vicissitudes of such a fickle business as entertainment. It was indeed a shock to the Hollywood system when sound was introduced, and the earliest examples of talkies - compared to the silents of such directors as Chaplin, Murnau, Vidor, Lang, von Sternberg, Pabst and Keaton - were stage-bound, claustrophobic and, well, talky. The new technology was TERRIBLE. But it was NEW, and failing to be an early adapter meant death for many a career. It's a lesson that still resonates today.

Alexander Payne's adaptation of a novel by Kaui Hart Hemmings captures the messy complexities of families that are emotionally charged by feelings of betrayal, inadequacy and rejection - and the efforts made to repair bonds that have been injured. It also shows the importance of extending one's sense of responsibility for reasons that go beyond self - to family, to generations long past and those still to come - and the selfish reasons for sometimes needing to act selflessly.

Grief is one of the most difficult emotions to dramatize in film because, while it is a universal experience, it is extremely particular. No two people grieve the loss of a loved one the same way. It is also extremely difficult to empathize with someone whose loss we can barely fathom, whose lost loved one we do not know. This is even more complicated when considering those who lost family and friends in the terror attacks of September 11, 2001, whose particular personal pain was mixed with the societal shock, anger and fear prompted by monumental acts of violence that appeared inexplicable.

The cast of "The Help" - one of the finest amassed for any film this year - splendidly performs the difficult task of making conditions that seem so far back in time vivid and current. The outrage that the film stirs is less about the government dictates that ruled Southern society as it is about the moral weakness that kept citizens toeing the line, until the bravest took a stand against discrimination and disrespect.

A young boy in 1930s Paris attempts to resurrect the reputation of film pioneer Georges Melies, but is met with tremendous anger and resentment from the old man, who wants nothing to do with his past. It is here that Martin Scorsese's film ceases being a "3-D children's fantasy" - which is how it was sold - and becomes a tale of aging, regret and the ravages of time, as we delve into the background of Melies, his work, and the profound impact life events can have on one's artistic expression, let alone survival.

"Midnight in Paris" is a clever example of Woody Allen's unique brand of urban character comedy, mixed with absurdist humor and the author's appreciation of artistic striving. But the film's greatest strength is its examination of the power and allure of nostalgia - how a vision of times past can cloud our ability to fully see and appreciate our present (and future).

Sports films typically suffer from predictability which defines the divide between rooting for sports and watching sports movies. When dealing with a game whose outcome is already known, a film audience can't be made to care whether the heroes win or lose; instead, the focus of the film must be on whether the heroes transform themselves (or others). The key to "Moneyball"'s success is following whether Billy Beane's efforts change the way the game is played, or whether the "bad guys" will rule at the end of a most unorthodox season. Even more intriguing is whether Beane can somehow exorcise whatever demons he may have regarding his failed playing career.

Brad Pitt on "Moneyball," kids and marriage
Why Brad Pitt was "obsessive" about "Moneyball"
"Moneyball": Thinking outside the batter's box

While non-conformist directors have been honored by the Academy of Motion Picture Arts and Sciences in the past, never has such an unorthodox and non-linear film - one with no easily-delineated storyline - as "The Tree of Life" been honored with a Best Picture Oscar nomination. Terrence Malick's ravishing personal epic - both cosmic and internal in scope - explores the memories and struggles of a Texas family touched by tragedy. It is a deeply personal film by a director whose focus extends well beyond the crisis of a character, the parameters of a setting, or even the constraints of time.

Director Steven Spielberg's greatest challenge was to make what had appeared abstract on stage - puppetry evoking a living horse on the battlefields of World War One - as strongly defined a character when portrayed by a flesh-and-blood animal. Another adaptation challenge, given that the book's narrator was a horse, was to tell the story of the film through a horse's eyes without anthropomorphizing the animal as it experiences the horrors of war. Spielberg's affinity for the wide canvas to tell an emotionally charged story is strongly apparent in "War Horse." Of this year's Best Picture nominees, it comes closest in spirit to the films of John Ford, in which landscapes are as important to defining characters as dialogue.

Weinstein: "The Intouchables" will make you feel good

The many faces of Meryl Streep