What's bugging us? The unfortunate answer to that question is almost impossible to see . . . and equally impossible to ignore. Our not-for-the-squeamish Cover Story now from Martha Teichner:

"The adult females are the ones you really have to look out for," says Jody Gangloff-Kaufman, who helpfully adds, "They're visible,"

She's talking about bedbugs, in case you accidentally bring one home with you. Females are likely to be loaded with eggs, just waiting to hatch.

"In the worst cases of bedbugs that have gone unchecked, there are probably hundreds of thousands in a home," said Gangloff-Kaufman.

Jody Gangloff-Kaufman, an entomologist with Cornell University (and bedbug expert) is the bearer of this bad news.

"The little vampires consume what's known as a blood meal," she said. "They anesthetize you when they bite, so you don't even feel it, 'til you wake up."

The first thing you see, she said, are bites. "A next sign that we prescribe people to look for are bloodstains. Bloodstains like magic marker spots on the sheets are a good indication of bedbugs feeding."

So those little black specks are human blood . . . your blood!

We at "Sunday Morning" like to tell you good news stories, but this time, there is no good news . . . unless you like your horror stories good and ghastly.

Exterminator Brian Alonso arms himself for his inspection of Dolores Stewart's home in Columbus, Ohio.

"I don't want them crawling all over me," she said. "And I stay up and I spray and I catch them with my hands."

In a survey released last month, of the nation's most bedbug-infested cities, Columbus ranks seventh, below Cincinnati, ahead of Dayton and Cleveland. Why so many in Ohio? Nobody knows.

Number one? New York! It's big, congested, and there are lots of travelers coming and going, trying on clothes at the stores that have had to shut down recently to fumigate.

According to the city's health dept, last year 6.7% of New Yorkers dealt with bedbugs. That's more than half a million people.

Why the explosion, and why now?

Gangloff-Kauffman says no one's quite sure. "But one thing's that's changed in the past ten years is the way we control things like cockroaches and ants. We tend to use baits instead of sprays for them, and we've lost a few of the chemicals that we would have used against those pests, and that may have given bedbugs a window to catch hold of our cities."

DDT, the deadly chemical people suddenly seem nostalgic about, was banned in 1973, long before the current outbreak.

Entomophobic is the word for being afraid of insects, and there's probably nothing that freaks people out more than being attacked in their beds.

"If I hear somebody has bedbugs, a bedbug, lice, I start scratching my head," said one woman (who prefers to remain nameless). She started scratching when she discovered that her neighbor two doors down the hall had bedbugs . . . scads of them. 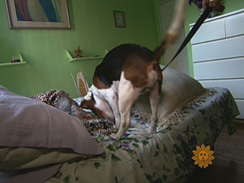 (CBS)
We can only tell you this building is somewhere in Manhattan.

Soto brings with him his trusty bedbug-sniffing beagle, Apollo.

The state of New York has just passed legislation requiring that landlords tell prospective tenants about bedbug infestations. But inspections like this one, starting at about $250, are done discreetly, given the widespread panic a bedbug infestation tends to cause.

"My mother would always say - she should rest in peace - if somebody said anything about bedbugs or mice, 'Oh my God, they're dirty, that's a dirty house, don't go there,'" the woman said.

We know now that's not true. Anybody can get bedbugs. Finding them before they're crawling all over the place, out of control, is where dogs like Apollo come in, searching large buildings fast.

"So you have to read the dog," explained Soto. "He scratches and he looks at me, and I can tell right away, 'OK, this is a real hit right here."

Soto can't find any live bedbugs, but he trusts Apollo's nose over his own eyes.

"Here's the bottom line: You can't see inside that bed, [but] the dog can smell inside there," said Bill Whitstine.

Whitstine's Florida Canine Academy, near Tampa, has placed 250 bedbug dogs around the world.

Whitstine says he's getting about a hundred calls a day, mainly from pest control professionals more than willing to pay $10,000 for an effective weapon in the war against bedbugs.

It takes about two months to train a dog and its handler. Caleb, a Bouvier, is close to graduating.

Some people, like Caleb's owner Christine Barsema, bring their dogs in to be trained. But most of Whitstine's students are mutts he rescues from shelters.

He introduced us to Nix ("a beginner"), and showed us a salt shaker full of live bedbugs. Whitstine starts by just trying to get Nix to distinguish it from other smells . . . and to give it a good sniff.

"So right now we're just getting her to smell the odor and recognize the odor, and when she smells that odor she gets a kibble and a positive reinforcement," Whitestine said.

Then come the more complicated searches: in baseboards, a bed, a nightstand - as seen from a dog's point of view (courtesy of the "Sunday Morning" bedbug cam).

Now I'm sure you're wondering, where does Bill Whitstine get his live bedbugs? They're overnighted from New York (where else?).

And if you're not totally grossed out already, listen to this from Jody Gangloff-Kaufmann:

"It's conceivable that at some point, everyone that you know will have dealt with them in one way or another, 'cause we haven't really stopped them or slowed them yet."

Here's some news you can use (even if you'd prefer not to have to): If you see those spots, throw your sheets, your clothes, your shoes into the dryer on hot for half an hour at 120ºF. Dead bedbugs!

Then, call a professional. Don't even try do-it-yourself bedbug eradication.

And whatever you do, city dwellers, don't scavenge stuff off the street, for fear of picking up an instant bedbug infestation kit. The only missing ingredient is you.