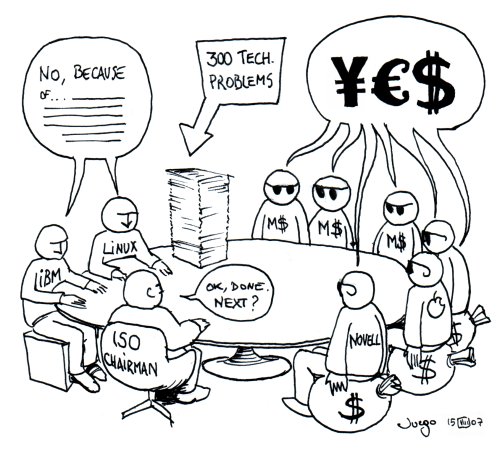 The intensely personal argument being fought in comments to my post on Microsoft's document format is the same one at the root of every major philosophical argument underlying revolution: it's the fight between radicals who want to wipe the slate clean and start over (Robespierre, the Bolsheviks) and pragmatists who favor reform and compromise (Danton, the Mensheviks). The radicals are willing to risk everything, including their lives, while the pragmatists are only willing to risk what matters most.

The stakes aren't quite as high when it comes to document formats, but the passions seem to run a close second -- no wonder tech disputes are often called "religious wars." At issue in the uncivil war being waged between Rob Weir and Gary Edwards is how to develop a document format to rival Microsoft Office that can succeed in the market and -- to all appearances more importantly to Weir and Edwards -- why the ODF format lost a bake-off in Massachusetts that should have been in the bag. (Weir is chief ODF architect at IBM and head of the OASIS ODF adoption technical committee; Edwards is CEO of OpenStack Business Systems and the former executive director of the Open Document Foundation.)

Neither side has any love lost for Microsoft, of course, although as usual, the radicals (in this case, Weir) accuse the reformers of betraying the cause, while the pragmatists (Edwards) accuse the radicals of pursuing their personal ambitions at the expense of the greater good. This technology dispute is over whether it's best to come to the best possible terms with the inevitability of Microsoft's continued elephantine presence, or to attempt to find an alternative that can supplant it entirely.

Edwards argues that any approach has to begin with the premise that Microsoft is ubiquitous:

The truth is that... ODF simply was not designed to be compatible with the productivity environment that dominates over 90% of existing business systems.

Weir's argument boils down to the that Microsoft will never allow a competing format to exist, even if user experiences suffer as a result.

[Concerning the] Compatibility Pack, Microsoft set it up so the user would be prompted to automatically download it the first time a user tries to open a DOCX file. That is how Windows installations end up with a lot of unused and unwanted crud, like the recent .NET add-in for Firefox.

In the case of both France and Russia, the radicals triumphed in the short term, while the pragmatists were proven right in the long run -- but the radicals could claim that their irredentism made the pragmatists seem more palpable by comparison. Just as the West needed an iron-fisted monarch to move past feudalism to the modern nation-state, we may have needed Microsoft's hegemony to create an established and predictable IT market. And just as the nation state shucked off the shackles of tyranny after the monarch had done his terrible but necessary work, so it may be that the market will reward Microsoft's good works by rejecting it in favor a more fractured and democratic state. Anyway, here's hoping.