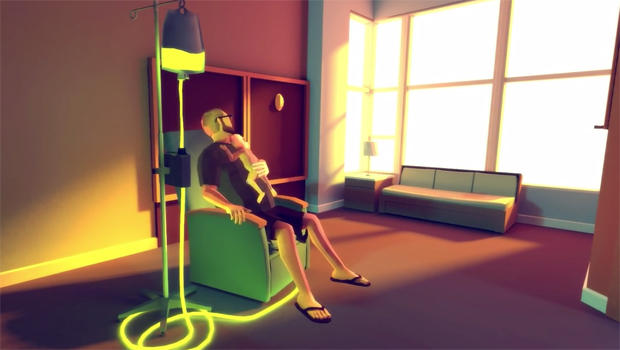 A GAME FOR JOEL is a different sort of video game -- it's one family's heartfelt tribute to a lost son, and a reminder of how far the fight against cancer has yet to go. Here's Ben Tracy:

It's homework time in the Green household just outside of Denver, and Ryan and Amy Green's kitchen table is definitely full. But when you look closely at the pictures on their refrigerator, you realize it's not nearly as full as it should be.

"I know people sometimes will not want to bring him up because they don't want to make us sad," Amy said. "But a lot of ways, we'd rather be sad remembering him than have a day pass where we don't think about him."

Their son, Joel, was diagnosed with terminal brain cancer in 2010. He was just one year old. The tumors left him partially blind and unable to speak, but at first the treatment was working.

"Like they had told us, he had four months to live, and we were a year-and-a-half past that date," Amy recalled. "And it just felt like our prayers were being answered, and we were seeing this miracle. And we thought, like, 'Oh, we gotta tell people!'"

The Greens decided to tell their story in an unlikely way -- through a video game.

Ryan is a video game developer. So he and his team created a different sort of game. They called it That Dragon, Cancer. The impressionistic game chronicles Joel's battle with cancer and the emotional ups-and-downs of caring for him.

But it's really more about contemplation than competition. While you can make Joel laugh and comfort him, it is often painfully hard to play. You are there when the Greens learn Joel's tumors have returned.

And there are times when you can't stop him from crying, like when he is dehydrated and inconsolable after another round of chemotherapy.

"The first thing that we ever created for the game was a retelling of a night that I spent in the hospital with Joel," said Ryan. "And it was one of the hardest nights of my life, as a father being unable to do the very thing that I prided myself on, right, which is bring comfort to my children."

Tracy said, "We both keep using the word 'game.' It just seems like such an odd term."

"I would say, 'No, it's not a game, but there are games in it,'" Ryan replied. "And it's not about fun. But there are moments when you have fun. And life is a mixture of the sorrowful and the joyful and weeping and playing and praying, and so I hope that it's a reflection of our life, you know, in the form of a videogame."

Joel lived beyond all expectations, yet the miracle story these parents thought they were telling ended in 2014. He was five.

And when he died, Amy Green said, "The game became our focus. In our grief and in missing him, we could all as a family kind of rally around finishing the game for him."

"We went from caring for Joel to making everybody care about Joel," Ryan laughed.

That Dragon, Cancer became a phenomenon in the gaming community.

"I think there's a very intense drive as parents to want your children to have some impact on the world," Amy said. "And when you have a child that dies, that's one of the things that you mourn maybe the most, is that all of the dreams you had for them don't happen. In creating the game, I think a lot of it was a desire to make sure that Joel's life impacted the world."

In the final scene of the game, Joel is surrounded by all of the things he loves: puppies, bubbles, and pancakes. He can finally see and speak.

"He was this fun, delightful boy," Amy said. "And so the idea that whatever heaven looks like, and whatever he is experiencing there, that he would be full of delight makes sense to us."