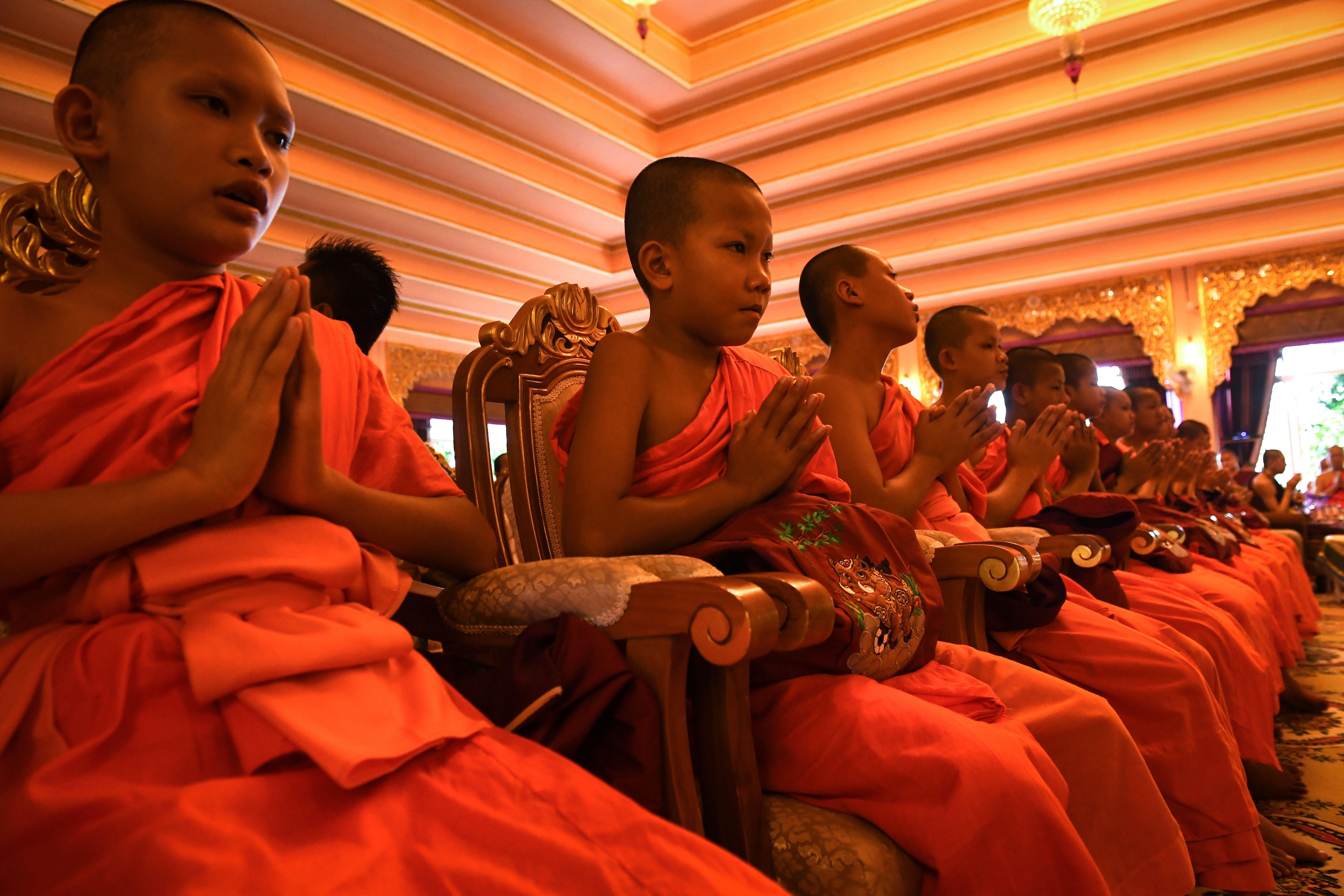 MAE SAI, Thailand -- With their heads bowed and wearing orange robes, the members of the boys' soccer team rescued from almost three weeks trapped in a cave in northern Thailand on Saturday completed their time as novice Buddhist monks. About 300 people gathered for the ceremony on a rainy morning that saw the boys leave temple life to return to their families. Those present gave alms -- flowers, food, money -- as a gesture of their religious devotion.

The July 25 ordination of 11 boys of the Wild Boars soccer team along with the 25-year-old coach was especially dedicated to a former Thai navy SEAL, Saman Gunan, who died while diving during a volunteer mission to supply the cave with oxygen tanks essential to a successful rescue. A twelfth boy did not go through the religious ritual because he isn't Buddhist.

At the temple near Thailand's mountainous border with Myanmar, the boys and their coach sat barefooted in a large pavilion in their orange robes. The adults sitting behind them wore white. With heads bowed, they prayed, fidgeted and occasionally yawned as monks chanted sacred texts. They then placed new monks' robes on a table in front of a large photo of Saman.

The experience was seen as a "spiritual cleansing for the boys" and also fulfilled a promise by the families to remember Saman, BBC News reported. The nine days they spent praying, meditating and cleaning their temple was a nod to a Thai lucky number.

As the boys completed their time, Coach Ekapol "Ake" Chanthawong remained in his Buddhist robe, as he has committed to an extended period in the monkhood.

Although they will be giving up their Buddhist robes, it is likely that the boys will retain some of the solitude of temple life, as the government has discouraged for the time being any interviews with them, wielding the threat of legal action under child protection laws.

While there has been some criticism that the government wants to control the narrative of the boys' ordeal to exploit for political purposes -- Thailand's military rulers are seeking to booster their popularity ahead of a possible election next year -- psychologists agree that the boys may be vulnerable to post-traumatic stress disorder. Both their physical and mental health has been judged fine.

According Dr. Paul Auerbach of the Department of Emergency Medicine at Stanford University's medical school, it's possible that they might suffer withdrawal or perhaps post-traumatic stress disorder, which is characterized by symptoms that include insomnia, nightmares, hypervigilance, low mood, difficulty concentrating on schoolwork, flashbacks and avoidance of situations similar to those that caused the original trauma.

"On the bright side, it is predictable that not all will be adversely affected -- perhaps only about a third of them -- and in those cases only a few might require professional psychological or psychiatric intervention," he said, speaking before the rescue.

The boys and their coach entered the cave on June 23 for a quick, casual trek, but flooding quickly blocked the exit and they had to retreat deeper inside the cave. Heavy rains raised water levels further and thwarted the initial searches before two British divers on July 2 found the group huddled on a dry patch of ground, safe but hungry.

The boys and their coach were trying to dig their way out when they heard voices in the darkness. The coach quickly told everyone to be quiet.

"We weren't sure if it was for real," said 14-year-old Adul Samon. "So we stopped and listened. And it turned out to be true."

They were extricated from the cave in an intricate operation involving an international team of divers over three days beginning July 8.

The epic event is being commemorated with construction of a museum, expected to open within six months, along with a statue of Saman, who is considered a national hero and was cremated in a royally sponsored funeral. His ashes were scattered in the Mekong River.

Chanta Jai-Ngiem told "CBS This Morning" that when she first heard that her son Dom had been found, she was overcome with emotion. She first saw his face on TV when Thai officials released video of the boys alive inside the cave after nine days.

"I was crying and screaming with happiness," she said.

She said last month that she is ready for things to go back to normal.