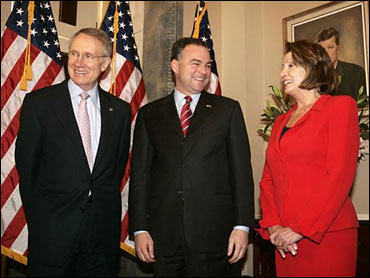 Text of the Democratic response to President Bush's State of the
Union address, as prepared for delivery by Gov. Tim Kaine
of Virginia, Jan. 31, 2006:

I worked as a missionary in Honduras when I was a young man and I learned to measure my life by the difference I can make in someone else's life. Coretta Scott King embodied that value and tonight, as a nation, we mourn her passing. Our faith and values teach us that there is no higher calling than serving others.

As Americans, we do great things when we work together. Some of our leaders in Washington seem to have forgotten that.

I want to offer some good news tonight—there is a better way.

In Virginia – and other states – we're moving ahead by focusing on service, competent management and results. It's all about bringing people together to find common sense solutions to our common problems. That's how Virginia earned the ranking of America's "Best Managed State."

No matter what political philosophy you hold, or what state you call home, you have a right to expect that your government can deliver results. When there's a crime or fire, you expect that police and firefighters have the tools to respond. When there's a natural disaster, you expect a well-managed response. When you send your children to school, you expect them to be prepared for success. And, you have a right to expect government to be fiscally responsible, pay the bills and live within its means.

Tonight, we heard the President again call to make his tax policies permanent, despite his Administration's failure to manage our staggering national debt. Over the past five years, we've gone from huge surpluses to massive deficits. No parent makes their child pay the mortgage. Why should we allow this Administration to pass down the bill for its reckless spending to our children and grandchildren?

There's a better way. Two years ago in Virginia, Democrats and Republicans worked together to reform our budget. By focusing on results, we were able to keep the budget balanced, preserve Virginia's strong credit rating, and protect the essential services families rely on: education, health care and law enforcement. States all across this country are doing the same thing, as the federal government falls further and further into debt.

Think about what's occurring in education. The Administration's No Child Left Behind Act is wreaking havoc on local school districts across the nation. Despite the insistence of Democrats in Congress that this program should be funded as promised, the Administration has opposed that funding and is refusing to let states try innovative alternatives. Now, the Republican leadership in Washington is cutting billions of dollars from the student loan programs that serve working families, helping get their children to college.

There's a better way. Last year, governors from across the country worked together in a bipartisan fashion to reform the last year of high school, making it serve our students better. Many states are working to make high quality Pre-Kindergarten accessible to every family. Congressional Democrats have a plan to educate 100,000 new engineers, scientist and mathematicians in the next four years. In Virginia, Democrats and Republicans worked together to make record investments in education. The results: more accredited schools and better student test scores.

Look at what's happening in health care. Skyrocketing costs are hurting small businesses and pushing millions of working Americans into the ranks of the uninsured. The White House has made efforts to cut Medicaid funds for our most vulnerable citizens. Seniors were promised that the new federal Medicare drug plan would make it easier and cheaper to obtain their medication. Instead, many are falling victim to the program's poor planning. They find getting their medicine to be more complex, more expensive, and less reliable.

There's a better way. Health care reforms must focus on making the system serve consumers better. Many states, following the lead of Illinois, have set up simple ways to help our seniors purchase safe, American-made prescription drugs from other countries at a fraction of the price they would pay here. The Administration actually fought against that Democratic effort! In Virginia, we have worked to provide health insurance coverage for nearly 140,000 children who weren't covered four years ago. And Republicans and Democrats alike have banded together to fight the Administration's efforts to slash Medicaid and push more costs on to the states.

The President called again tonight for our commitment to win the war on terror and to support our troops. All Americans embrace those goals. We can, and we must, defeat those who attack and kill innocent people. While the images of the World Trade Center are seared in the minds of all Americans, so too are the memories of those who died on sacred ground in Virginia in the attack on the Pentagon. Our commitment to winning the war on terrorism compels us to ask this question: Are the President's policies the best way to win this war?

There's a better way. Working together, we must give our troops the tools they need to win the war on terror. We can do it without sacrificing the liberty we have sent our troops abroad to defend. Our support has to begin at home. That's why we in Virginia – Democrats working with Republicans -- have reformed and enhanced our Department of Veterans Services to help our veterans and their family members access the benefits that they have earned. And, we are working to provide state re-enlistment bonuses to honor Virginians who stay in service to Commonwealth and Country.

When it comes to energy, Americans are using more than ever, paying more for it, and are more dependent on the Middle East than ever before.

There's a better way. Last summer, I joined Democrats in Washington and in other states in calling on oil companies to share in our sacrifice and return some of their record-breaking excess profits.

Democrats at both the state and national levels are leading the way on energy reforms, calling for greater public investments for alternative, advanced energy technologies. These investments will promote energy independence, boost our nation's economy, create jobs, and strengthen national security.

The failure of the federal government to implement and enforce a rational immigration policy has resulted in a confusing patchwork of state and local efforts. We should welcome those who seek to lawfully join and contribute to our American family. At the same time, we must ensure that our homeland defense efforts begin with consistent federal action to protect our borders.

The Administration is falling behind in other critical areas; preserving our environment, keeping our workplaces safe, protecting family farms, keeping jobs in America. Our communities are left to deal with the challenges and consequences of those failures without a reliable federal partner. But, we manage to find a better way.

The better way is to focus on service. It's about measuring what we do in terms of real results for real people. It's not about partisanship or political spin. It's about protecting the rights endowed by our Creator; fulfilling the principle of equality set out in our Declaration of Independence; ensuring that the light of liberty shines on every American.

If we want to replace the division that grips our nation's capital, we need a change. Democrats are leading that reform effort, working to restore honesty and openness to our government, working to replace a culture of partisanship and cronyism with an ethic of service and results.

Our greatest need is for America to heal its partisan wounds and become one people. You know, those are the words Thomas Jefferson wrote after being elected President. They ring as true today as they did in 1800. Tonight we pray, earnestly and humbly, for that healing, and for the day when service returns again as the better way to a new national politics.

We ask all Americans to join us in that effort.

Together, America can do better.

Thank you for listening and God Bless the United States of America.