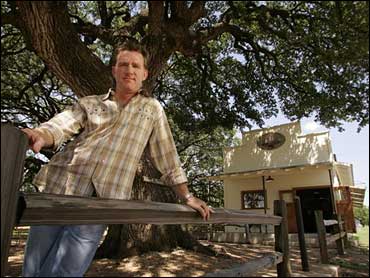 Bobby Cave, owner of a Texas town called Albert, decided this year to sell. Then a friend mentioned the online auction site eBay. Now, with the click of a mouse - and at least $2.5 million - Albert could be yours.

After spending hundreds of thousands of dollars to clean up and restore the 13-acre town about 50 miles north of San Antonio, Cave said he's ready to move on to his next venture.

"It's a concept. It's one of a kind," said Cave, 47, a real estate agent. "It's more like a piece of art than it is a real estate property. That's why eBay sounded so good to us. It's quirky."

Eric Meissner, Cave's friend and co-listing agent, said Albert qualifies as a town, or at least was once a town, because it used to have a post office. Albert dates to the late 1800s and is now unincorporated.

"There is a road sign with a name on it. It's indicative of an area," Meissner said. "Just because the post office goes away the town doesn't go away."

No one lives there permanently, but the tavern that Cave created from the frame of the old general store is open on weekends. There are also the "cleanest public restrooms in Texas," built by Cave, and a pavilion, 85-year-old dance hall, tractor shed and three-bedroom house. All of that, plus peach and pecan orchards, come with the land.

Cave said he will even throw in his plan to turn the place into a tourist destination, including plans for a restaurant and cabins.

The eBay auction closes Nov. 23. On Thursday at 9

"We always like it when these kinds of things appear on the site because it's fun," Durzy said. "We wish them luck."

Bridgeville, in northern California, was the first town ever put on the eBay auction block. The 83 acres were twice sold on the site, in 2002 (that deal fell through) and again last year.

Iowa wants to ban food-stamp users from buying meat and flour
Thanks for reading CBS NEWS.
Create your free account or log in
for more features.
View CBS News In
CBS News App Open
Chrome Safari Continue
Be the first to know
Get browser notifications for breaking news, live events, and exclusive reporting.