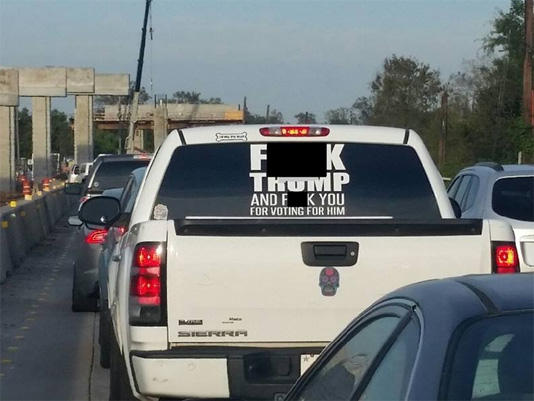 HOUSTON -- A Houston-area sheriff said Wednesday he's concerned the driver of a truck displaying an expletive filled message against President Trump and those who voted for him is creating a situation that could lead to confrontations with people offended by the sign.

In a since-deleted Facebook post, Fort Bend County Sheriff Troy Nehls said he discussed with a local prosecutor the possibility of a disorderly conduct charge -- a misdemeanor -- against the driver.

But at a news conference later Wednesday, Nehls seemed to back down from that idea, saying he supports freedom of speech and acknowledging a 1971 Supreme Court case that overturned the conviction of a man for disturbing the peace for wearing a jacket with an expletive as part of an effort to protest the military draft and the Vietnam War.

"People have called and are offended by the language," said Nehls, according to CBS affiliate KHOU-TV. "I simply want to talk to the owner and say, 'Look, the last thing we need to do is have anyone have any confrontation over the language on your truck.'"

"We have not threatened anybody with arrest. We have not written any citations," Nehls said. "But I think now it would be a good time to have meaningful dialogue with that person and express the concerns out there regarding the language on the truck."

Authorities know who the driver is but have not yet spoken with the individual. Nehls did not name the driver at his news conference, but KHOU tracked down the owners, Karen and Mike Fonseca. They said they were stunned by the sheriff's post and said they were entitled to free speech.

"There's no law against freedom of speech, nothing in the law book here in Texas, I've been stopped numerous times, but they can't write me a ticket," said Karen Fonseca.

Her husband said they would not remove the decal.

"No plans to take it down," said Mike. "Unless he can show me where it says that in the law book, it's not coming down until the weather takes it down or I replace it with something else."

The sheriff said he wants to avoid a situation where somebody could take offense to the sign on the truck, possibly leading to a confrontation.

"I don't want to see anything happen to anyone," Nehls said. "With people's ... mindset today, that's the last thing we need, a breach of the peace."

Legal experts say the Fonsecas have a constitutionally protected right to express the message on the truck.

"It would be dangerous to our freedoms if you start going that route where a sheriff has the right to start censoring people about what might be offensive," said Philip Hilder, a Houston criminal defense attorney and former federal prosecutor.

Hilder said he doesn't think Fort Bend County -- located southwest of Houston -- would have a case for disorderly conduct against the driver of the truck.

"Is (the sign on the truck) tasteful? No. Is it dignified? No, but it's still a person's statement that is constitutionally protected," Hilder said.