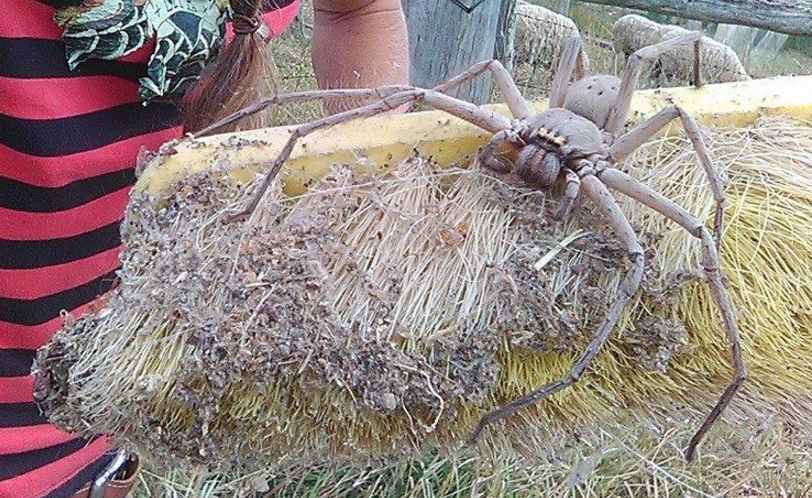 It’s like a terrifying scene straight out of a Harry Potter movie, except this time, it’s real.

Photos of a giant huntsman spider that was rescued in Queensland, Australia, last year are going viral — and people can’t believe their eyes.

“Yes, she is very real and very large and not photoshopped,” Barnyard Betty’s Rescue, a local animal sanctuary that rescued the spider, explained in a Facebook post on Thursday.

Though alarmingly large, huntsman spiders — with leg spans of up to 12 inches — are generally known to be gentle, harmless creatures.

“She was a beautiful, calm spider, not aggressive in any way and like most spiders she just wanted to go about her business eating bugs and living in peace,” the rescue organization explained. “She didn’t or doesn’t need to be killed! Poor spiders are so misunderstood!”

The spider was discovered last October in an old farmhouse.

“The kids came running out of the house yelling to me that there was a spider,” Betty from Barnyard Betty’s Rescue told CBS News. “Their mother wanted to kill it. I said ‘No, don’t kill; I’ll remove it!’”

Ordinarily, when Betty tries to catch a spider, she pops a glass over them on the wall and then slides some paper underneath.

But when she saw the size of Charlotte, she knew she needed a new plan.

“She was the size of a dinner plate,” Betty described. “So, I grabbed an old broom and gently got her to climb onto the broom head.”

After snapping some photos, Betty released the spider into an old shed where she knew she’d be safe from people and predators.

The photos have been shared by 75,000 people since they were first posted in October 2015.

“I’m not sure why now but she is going absolutely viral and become an internet sensation,” Barnyard Betty’s Rescue wrote.

The internet has been fascinated by spiders lately. Last week, a haunting video of a huntsman spider carrying a whole mouse in its mouth up the outside of a refrigerator captured everyone’s attention. Some even called “Mouse Spider” the next “Pizza Rat.”

But Barnyard Betty’s Rescue assures you there’s nothing to fear from Charlotte.