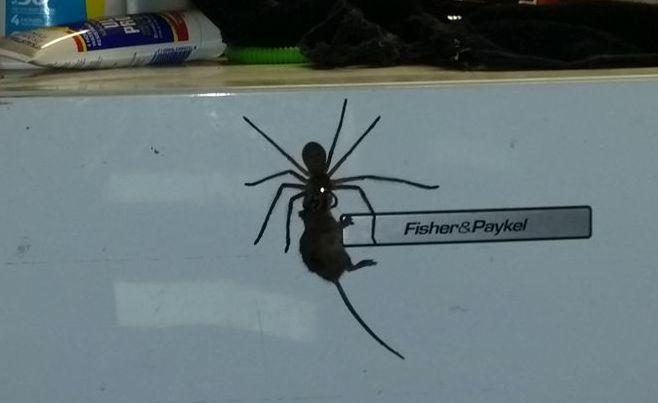 Remember when the internet was enthralled with a common rat determined enough to drag a slice of discarded pizza down the stairs of the New York City subway? Those were the good old days.

There is a new super-determined creature breaking the internet this morning and it will make you yearn for the days of Pizza Rat.

Social media’s newest viral sensation is of the insect variety and it’s absolutely horrifying: a huntsman spider large enough and strong enough to carry a whole mouse in its mouth up the outside of a refrigerator.

No, this is not a hoax, nor is it a Halloween stunt. This was an actually occurrence, videotaped and then posted on Facebook by Jason Womal, a tradesman from Coppabella, Queensland.

Huntsman spiders, which generally feed on pests like cockroaches and crickets, immobilize their prey with poisonous venom. So, it is more than likely that is the fate which befell the mouse in this video.

If you are now cowering in a corner with cans of Raid clutched in both hands, here’s a bit of good news to ease your terror: This sighting occurred in Australia, which is where huntsman spiders – so named for their speed and style of obtaining prey – are most common.

They have, however, also been spotted in southern areas of the United States, including Texas, Florida and Puerto Rico. Apologies, arachnophobes.

And while the rodent’s outlook does not appear good, Womal returned to Facebook after his initial post with an update on the giant spider.

“Ok guys so just letting you all know that the spider is fine,” Womal wrote. “We have named him Hermie, we have adopted him and he is now running his own extermination business out of our town Coppabella. Oh and he is now paying rent. Lol.”

“Hermie” has now racked up more than 10 million views in just over 24 hours.