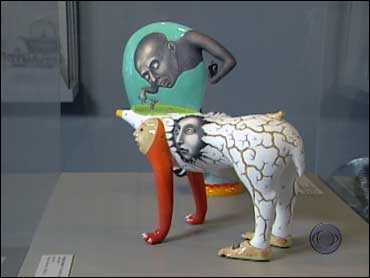 Earmarks are local pet projects that members of Congress slip into spending bills, often under the public radar screen. CBS News correspondent Sharyl Attkisson will be investigating some of those earmarks in Eye on Your Money.

It might sound far-fetched that a quirky collection of teapots would draw 60,000 tourists each year to Sparta, N.C., population 18,000. But the plan is being financed by your tax dollars.

The Sparta Teapot Museum is the brainchild of avid teapot collectors Sonny and Gloria Kamm and North Carolina philanthropist Philip Hanes — as in Hanes underwear.

Sparta Town Manager Bryan Edwards admits it's something of a gamble.

When asked whether he thinks this teapot museum would really make a difference to the economy here, the mayor said, "That's hard to say. Clearly it's speculative; there are risks involved. We don't have a track record."

But with the help of a few good Washington lobbyists, the Sparta Teapot Museum has gotten $400,000 in state funds and $500,000 from Congress.

It's nothing against teapots or the dream. Maybe tens of thousands of teapot-seeking tourists will flock into Sparta and spend millions of dollars. But the question is this: Why should your federal tax dollars be used for this local project?

Attkisson asked Rep. Virginia Foxx, R-N.C., who, with Sen. Richard Burr, got the Teapot Museum its money. They also received several thousand dollars in campaign contributions from the project's lobbyists.

Foxx told us she's simply claiming a share of the money Congress sets aside each year for such purposes, called "earmarks."

"The money's gonna be spent, and it's up to us to again be advocates for our areas to try to help with those areas," Foxx said.

They say the money is there, why shouldn't we have a piece of it — so what's wrong with that?

"That is exactly the kind of attitude that got us $29 billion in pork in 2006," said Leslie Paige of Citizens Against Government Waste.

That's right, $29 billion worth of race-car research, something called the Cattle Congress — and teapot museums.

"I don't see how a teapot museum is a national priority, under any circumstances," Paige said.

Some of the teapots are on display downtown until the museum is built next year. An hour and a half from the nearest airport, it's a bit of a trip, but the folks in Sparta hope it's your next vacation destination.

They sure would appreciate your continued support.