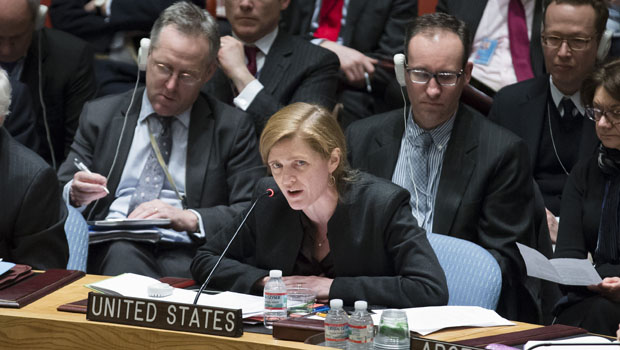 U.N. Secretary General Ban Ki-moon placed a call to Russian President Vladimir Putin after being asked by the new Ukraine government for help - on a day when agreement seemed to be in short supply at U.N. Headquarters in New York.

"I told him that I am closely following the serious and rapidly unfolding developments in Ukraine," Ban said. "I appealed to President Putin to urgently engage in direct dialogue with the authorities in Kiev."

Ban went on to say, "I am gravely concerned by some of the recent events in particular those that could in any way compromise the unity, sovereignty and territorial integrity of the country."

But the Secretary General did not say what Putin's response was to his plea.

The Kremlin website gave a different picture of the conversation.

"Vladimir Putin," it said of the same conversation, "noted that in case of any escalation of violence against the Russian-speaking population of the eastern regions of Ukraine and Crimea, Russia would not be able to stay away and would resort to whatever measures are necessary in compliance with international law."

"Both parties stressed the need to prevent further exacerbation of the crisis in Ukraine," the Kremlin added.

In New York, in the second emergency session in as many days, the Security Council met on Saturday, in both open and closed sessions, to iron out a response. But, at the conclusion, there was no U.N. resolution, not a presidential statement, nor a less-significant press statement.

Undiplomatic exchanges showed the level of disagreement. The Ukrainian ambassador to the U.N., Yuriy Sergeyev, called the on-the-lam president of Ukraine, Viktor Yanukovich, "crazy," and said that 15,000 Russian troops were recently sent to Crimea.

"The Russian Federation brutally violated the basic principles of the United Nations," a statement the Ukraine Mission issued to all U.N. missions said, and it asked the guarantor states under the Budapest Memorandum, including the United States, United Kingdom, France and China, "to react immediately to prevent the intervention."

"The Russian military must stand down; the aspirations of the Ukrainian people must be respected," U.S. Ambassador Samantha Power told the Council.

"It is ironic," Power went on to say, "that the Russian Federation regularly goes out of its way in this Chamber to emphasize the sanctity of national borders and of sovereignty, but Russian actions in Ukraine are violating the sovereignty of Ukraine and pose a threat to peace and security."

Power called for the immediate deployment of international observers from either the Organization for Security and Co-operation in Europe or the United Nations and an international mediation mission to the Crimea.

Russian Ambassador Vitaly Churkin, who was upset that the meeting was called to be closed door, and was changed to have a formal, on-camera session, said that military movements by Russian forces were compliant with its agreement with Ukraine agreements.

In one of the stronger reactions, U.K. Ambassador Mark Lyall Grant said, "The United Kingdom is deeply concerned by the escalation of tensions in the Crimean Peninsula, and by the fact that the Russian parliament has authorized Russian military action on Ukrainian soil against the wishes of the Ukrainian Government. This action is a grave threat to the sovereignty, independence and territorial integrity of Ukraine. We condemn any act of aggression against Ukraine."

As the U.N. Security Council meeting ended, the president of the Security Council, Luxembourg Ambassador Sylvie Lucas reflected what the Council could represent as common interests: She said that the Council members stressed the significance of Ukraine's territorial integrity, the need for international monitors, and asked all sides to exercise restraint and create an inclusive political dialogue.

As far as Ukraine is concerned, they did not expect action today. They will call for another Security Council session on Monday, after the Ukraine parliament meets, Serveyev told CBS News.

Asked by CBS News if the U.N. Security Council action was disappointing, Lyall Grant said. "We are not giving up yet."