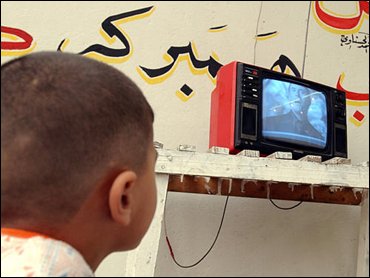 During Saddam Hussein's 33-year reign, the Iraqi people could watch only state-controlled television networks whose main task was to act as Baath Party mouthpieces and praise Saddam and his policies.

But today, in a small room at Baghdad's bunker-like conference center, journalism is being practiced in postwar Iraq — by Iraqis.

"Now, I have freedom in selecting and handling the subjects the way I like," TV reporter Mahmoud Faud said. "Now we are able to criticize everybody — including the Americans."

Faud is part of the 70-member staff of the Iraqi Media Network, the first new — and coalition-backed — television station to reach the airwaves from Iraq since the April overthrow of Saddam Hussein.

The newsroom is in a VIP lounge of the Conference Palace, which is now occupied by Iraq's U.S.-led administration. When the tapes are ready, they are sent over to the al-Salhiya transmission tower across the street from the television station, which was demolished in coalition bombing raids.

Faud started working for Iraq's state-controlled television three years ago, monitoring international satellite channels that ordinary Iraqis were not allowed to watch. He studied the foreign broadcasts and learned how to structure a TV report and do interviews.

"We tried to imitate them," Faud said.

After Saddam's ouster in April, Iraq's state-run TV stations went off the air and Baghdad's inhabitants could only tune in to the grainy Iranian channels broadcasting from across the border.

The Iraq Media Network, launched May 13, begins airing its programs at 6 p.m. every day by showing the Iraqi flag accompanied by the music of "My Homeland," a popular patriotic song.

The station's regular fare includes cartoons, Egyptian soap operas, performances by Iraqi folk singers, news and sports reports, and man-in-the street interviews complaining about the shortages in electricity and fuel and the lack of security in the Iraqi capital.

Don North, an official with the Office of Reconstruction and Humanitarian Assistance, the civilian wing of the U.S. occupation force, said the television station's equipment is ancient and difficult to integrate with the more modern, digital equipment provided by ORHA.

On its first day of operation, the new channel interviewed Jay Garner, then the top U.S. administrator in Iraq. But when they wanted to broadcast the interview, North said, the tape was nowhere to be found.

"Maybe," he joked, "some Baathist stole it."