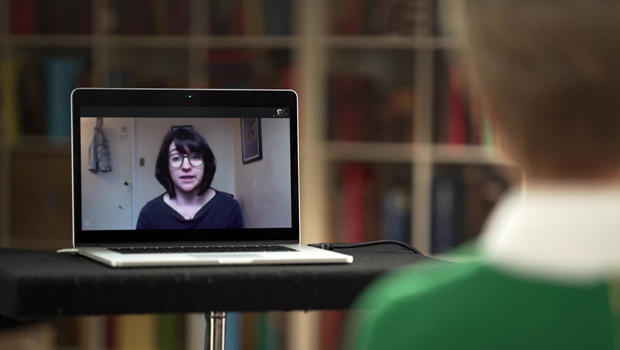 Teresa Brown has had a life without luxuries or much security, or any peace of mind.

Correspondent Susan Spencer asked her, "Talk to me a little bit about this feeling of stress, that has basically been with you since you were a child."

"In order for me to kind of talk about it, I have to think about the traumas that I've been through," said Brown. "Traumas like, not just growing up poor but growing up where we lived in apartments that didn't have heat, or grew up in neighborhoods that had high crime, or went to schools where you were bullied, those things."

She spent years trying to process those traumas, all the while raising her three nieces in New York City. Finally, she found help from a therapist.

"What kind of things do you talk to the therapist about?" asked Spencer.

"Pretty much what is it I could do to either relieve my stress, or find tools to help me deal with the situations I have been going through."

But three weeks ago, she wasn't sure she'd ever see that therapist again.

The pandemic meant that Mosaic, the non-profit mental health center in the Bronx where brown goes, had no choice but to close its doors to in-person visits – no one-on-one therapy, no counseling.

Spencer asked Donna Demetri Friedman, the executive director of Mosaic, "When you realized the magnitude of this pandemic, was there a time when you weren't sure that you'd be able to continue to serve your clients?"

"Yes," she replied. "And that frightened me tremendously."

Friedman said she could not imagine leaving more than a thousand desperate, low-income clients with nowhere to turn in the midst of a terrifying pandemic: "The stakes are very high. Some people have anxiety. Some people have major depressive illness. And that's all heightened, of course, in this crisis. So, we would be seeing people really begin to decompensate."

So, three weeks ago, Friedman's staff of 100 took drastic measures, switching all mental health counseling to teletherapy, a fancy name for using the phone. They were not authorized to do so until the pandemic hit, and New York State waived its regulations.

Spencer said, "It seems like this must have been a sea change for you."

"We mobilized immediately actually before we even had guidance," said Friedman.

"What about the challenges in terms of actually helping anybody this way?"

Dr. Jeffrey Lieberman, chair of the Psychiatry Department at Columbia University College of Physicians and Surgeons, said teletherapy "is ideally suited to providing mental health care under the current circumstances. And it's being used more now than ever in history."

And it's a long history.  Back in 1959, the Nebraska Psychiatric Institute first used videoconferencing. A decade later, teletherapy consultations were available to troubled travelers at Boston's Logan Airport. And about 30 years ago, telepsychiatry became a subject of serious study.

Spencver asked, "Do you think that really it's as effective as it is to have a one-on-one conversation?"

It better be, now more than ever. New research shows that living in quarantine can have grave long-term mental health effects, as New York governor Andrew Cuomo recently recognized. "I am asking psychiatrists, psychologists, therapists who are willing to volunteer their time to contact the state," he said.

More than 6,000 people responded … no surprise to Dr. Lieberman. "This is gonna have a population-wide effect of PTSD proportions," he said. "It's almost primal. It's almost apocalyptic in its nature."

Spencer asked Katie Riordan, a mental health counselor at Mosaic, "What are the challenges that the whole teletherapy thing poses in itself?"

"What is lacking is the ability to see someone's face," she replied, "to, you know, feel what someone brings into a room, But I don't know where we'd be without [teletherapy] right now, frankly."

Lately, Riordan has been on the phone, a lot, offering therapy six days a week, about 10 hours a day.

One of Katie's patients is Teresa Brown, whom she knows as Teri: "Teri is the, you know, the guardian of a family balancing so many different challenges: financial, educational, physical space. This pandemic didn't get rid of problems that existed prior to it coming along, right? So, all these stressors that have led people to feelings of helplessness and hopelessness and anxiety and powerlessness before this emerged, now they're just compounded with the world as we knew it, you know, being shaken up."

"It's Teri Brown's challenge," she replied. "It's my challenge."

Brown told Spencer, "Yes, I have a lotta anxiety, but I am trying so hard to be positive about this, because it's not just for me. It's for my children. And I want them to understand that, 'Don't panic. Things will get better.'"

For now at least, that may be the best advice of all.

Nearly half of Americans live in areas where they should consider masking, CDC data says
More
Thanks for reading CBS NEWS.
Create your free account or log in
for more features.
View CBS News In
CBS News App Open
Chrome Safari Continue
Be the first to know
Get browser notifications for breaking news, live events, and exclusive reporting.