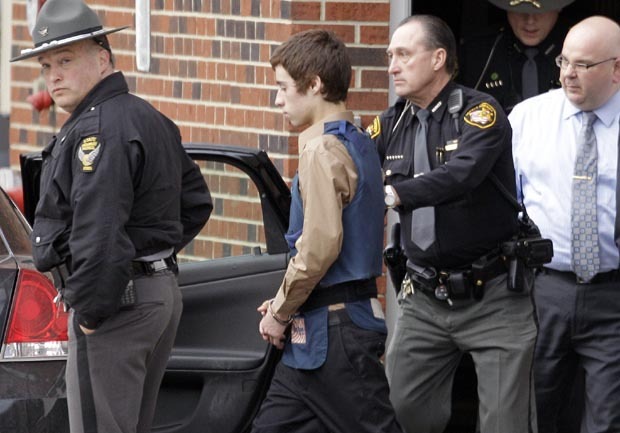 (CBS/AP) CHARDON, Ohio - A teenager was charged Thursday with killing three students in a school shooting, the first step in proceedings that could see him charged as an adult and facing the possibility of life without parole if convicted.

The charges filed in Geauga County juvenile court accuse T.J. Lane, 17, of killing three students and wounding two others in the shooting Monday morning at Chardon High School, about 30 miles east of Cleveland.

Students say the gunman was chased from a cafeteria by an assistant football coach, Frank Hall, who has been praised as a hero. Hall spoke shortly after the charges were filed and said he wants the victims' families to know he was with their children and wiped away their tears. (Watch video above).

"I don't know why this happened," he said. "I only wish I could have done more. I'm not a hero. I'm just a football coach and a study hall teacher." The emergency responders at the scene were the real heroes, he said.

Coach from Ohio school shooting: "I'm not a hero"

No motive has been determined. Prosecutor David Joyce has said that victims were selected at random and that Lane is someone "who's not well."

Children convicted of juvenile crimes in Ohio are typically behind bars only until they turn 21 in the most serious cases. But Joyce has already said he plans to charge Lane as an adult, meaning he could face life in prison without parole if convicted of similar adult charges.

Minors are not eligible for the death penalty in Ohio, whether they are convicted as juveniles or adults.

Lane, who attends an alternative school for students who haven't done well in traditional schools, admitted taking a .22-caliber pistol and a knife to Chardon High and firing 10 shots at a group of students sitting at a cafeteria table Monday morning, Joyce said.

The Tribune-Review in Pittsburgh reported that Lane's aunt, Heather Lane, said earlier by email that her family is "weeping and praying" for Chardon. She says they're grateful for people who have prayed for them and urged the public to continue praying for the victims.

Killed were Demetrius Hewlin, 16, Russell King Jr., 17, and Daniel Parmertor, 16. The motive for the shooting is unclear, though Joyce has appeared to rule out theories involving bullying or drug-dealing.

Hewlin attended Chardon High. King and Parmertor were students at a vocational school and were waiting in the Chardon High cafeteria for their daily bus when they were shot.

Parmertor had just gotten his first job at a bowling alley and couldn't stop talking about how excited he was to pick up his first paycheck later this week, his parents said.

Two other students were wounded. Nick Walczak remains in serious condition. An 18-year-old girl was released from the hospital Tuesday.

Lane was a normal boy who excelled in school and played outside often with his sister, building snow hills and skateboarding, according to Steve Sawczak, a family friend who's a pastor and has worked with troubled children.

He said he never would have allowed his own grandchildren to play nearby if he thought anything was wrong with Lane.