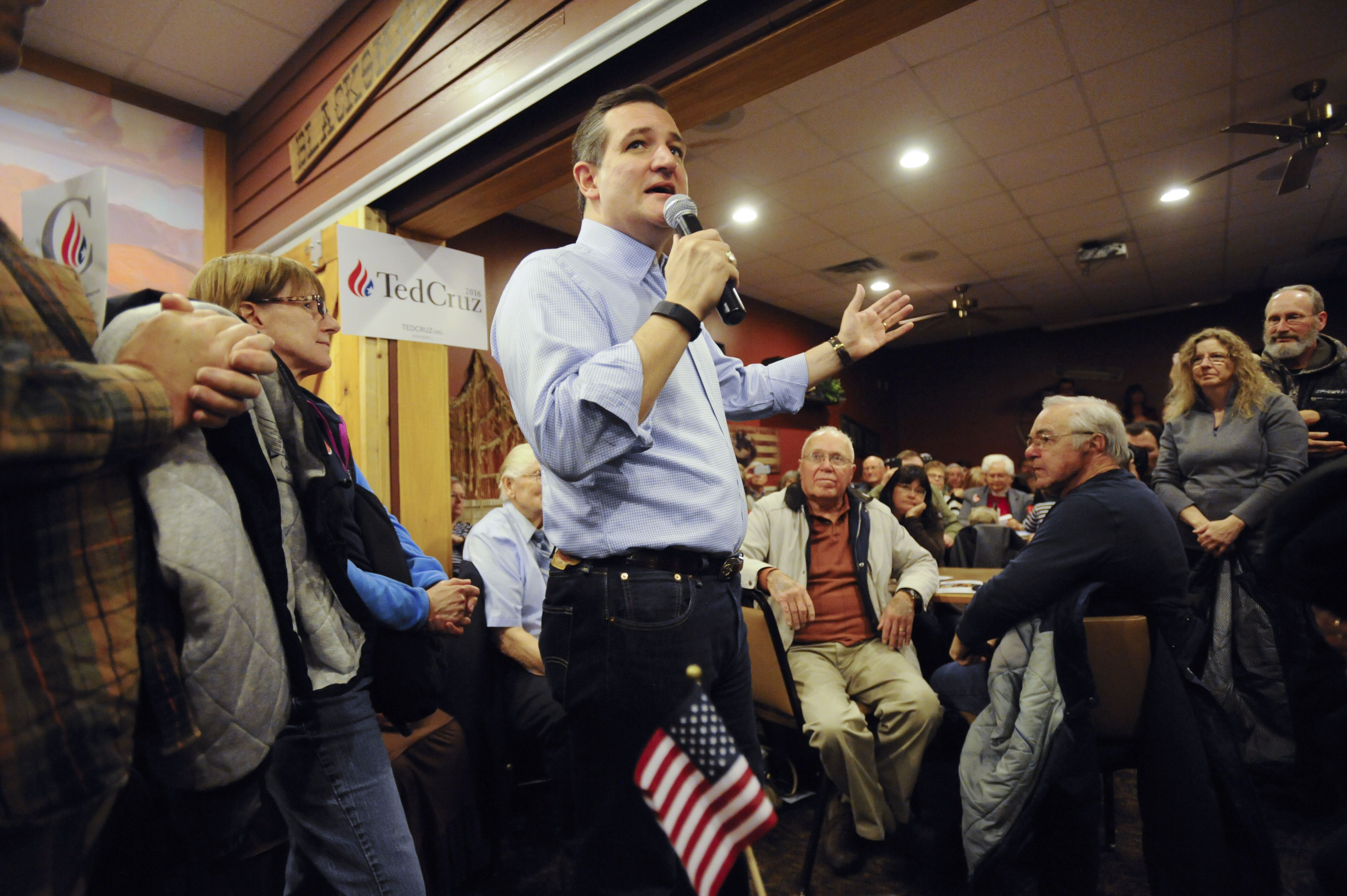 KNOXVILLE, Tennessee - Four hours before Ted Cruz was expected to arrive at Farragut High School, Tammy Purcell exclaimed cheerily, "I want to make sure I get in there. I want to give him this birthday cupcake," she said, explaining why she was the first person in line to see Cruz. She had come at 6 a.m., wielding a cupcake in one hand and a sign reading "Happy Birthday Ted" in the other as she waited outside in the damp fog that had enveloped the school.

Purcell was just one of many supporters who habitually line up outside the schools and civic centers hours before the doors open in order to get a good seat. And that's not lost on the senator, almost always lingers afterwards to show his appreciation.

Forty minutes after Cruz finished giving his stump speech in the high school auditorium in Knoxville, he was still there working what remained of the crowd. "We got two minutes so we're going to a couple more pictures then we got to go!" Cruz's young body man Bruce Redden told the people left. Two minutes passed as the senator continues to pose with supporters who were still lined up. Redden raises his hand to summon him, and Cruz without missing a beat interjected, "I tell you what -- we're going to do a group picture."

Cruz, who has focused much of his campaign on winning over Iowa Republicans, has seen his polling tick up, and lately he's been looking beyond Iowa to the southern states, which will hold primaries in the days and weeks immediately after the early February contests in Iowa and New Hampshire.

That expanded effort - and the desire to hold onto the feel of retail politicking - is a more difficult endeavor because the crowds coming to see Cruz have surged in concert with his rising poll numbers in early states and nationally. Well over a thousand people showed up for rallies in Birmingham and Mobile, Alabama over the weekend.

Cruz's desire to work the crowd also creates some scheduling challenges. Campaign press secretary Catherine Frazier estimates that Cruz spends anywhere from 30 minutes to an hour after events meeting voters. Combined with the large crowds, this meant that the campaign could only realistically fit in two events a day during the "Take Off with Ted" tour through the Southern states, despite having a private jet.

"It's positive for our campaign in that it's an experience they'll have for a lifetime," campaign manager Jeff Roe said.

Cruz seems comfortable with the open dislike of nearly all of his Senate colleagues (something that he celebrates on the campaign trail). He's said as much -- in one debate, when asked to tell the audience about a weakness, he said, "If you want someone to grab a beer with, I may not be that guy. But if you want someone to drive you home, I will get the job done and I will get you home." It turns out, in fact, that the voters who turn out for his events like him plenty.

"I have done a few campaigns over the years, and know a few candidates. I have never seen anybody that adores the people that come to his events like he does," said Roe, who suggested it would have been easy for the candidate to take it easy over the holiday, "It's his birthday. It's very close to Christmas. It'd be very easy for him to take a couple of days make some fundraising crowds and hang out and here we are. It's because he loves people to interact, he love to hear their stories, and I think it makes him a better candidate frankly. That's not something you can teach. There's no strategy to this."

It's something that the people who come to see the Senator find endearing. "I can't believe he's still here right now," exclaimed Clyde Cummins of Kodak, Tennessee as he worked his way up to greet Cruz, "but that's the kind of guy I think he is."