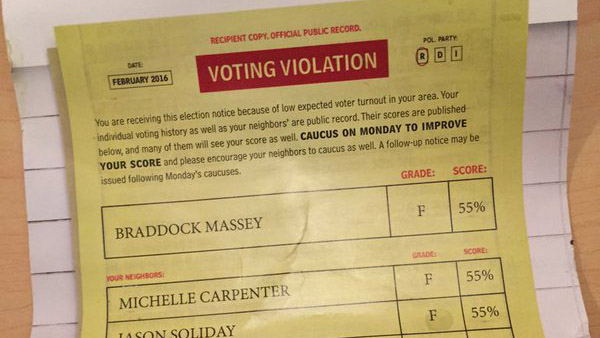 Ted Cruz's campaign is under fire for sending potential caucus attendees a official-looking mailer that gives them and their neighbors a score for past election turnout and implores them to caucus Monday night to improve those scores.

The mailer earned a public rebuke from the Iowa secretary of state, who said it was "not in keeping in the spirit of the Iowa caucuses," and some of the Texas senator's fellow 2016 candidates - including Florida Sen. Marco Rubio, whose campaign sent a similar, if less official-looking, piece of literature.

According to pictures posted on Twitter, the mailer - emblazoned at the top with the words "VOTING VIOLATION" states, "You are receiving this election notice because of low expected voter turnout in your area. Your individual voting history as well as your neighbors' are public record. Their scores are published below, and many of them will see your score as well. Caucus on Monday to improve your score and please encourage your neighbors to caucus as well. A follow-up notice may be issued following Monday's caucuses."

It includes the voter's name, a letter grade, and a numerical score to represent past caucus turnout, as well as similar information for six of the recipient's neighbors.

At the bottom, the mailer states, "Voting registration and voter history records are public records distributed by the Iowa Secretary of State and/or county election clerks."

Iowa Secretary of State Paul Pate quickly sought to distance his office from the mailer, writing in a message on Facebook that the mailer "misrepresents the role of my office, and worse, misrepresents Iowa election law."

"Accusing citizens of Iowa of a 'voting violation' based on Iowa Caucus participation, or lack thereof, is false representation of an official act. There is no such thing as an election violation related to frequency of voting. Any insinuation or statement to the contrary is wrong and I believe it is not in keeping in the spirit of the Iowa Caucuses," Pate wrote.

He also wrote that the secretary of state's office never "grades" voters and that neither his office nor local election officials retain records about caucus participation. That is done by the state political parties, which are allowed to sell the information for political purposes.

Sen. Marco Rubio's campaign is has sent out a similar mailer that was first reported by Time and confirmed by his campaign, although it does not purport to be an official notice and does not mention the secretary of state's office. It tells the recipient that a certain number of voters are participating in the caucus on Monday, but does not name their names.

It does include a chart that reflects their participation in previous caucuses and tells recipients to "improve your score by caucusing on Monday, February 1st." Pate has not publicly mentioned Rubio's mailers.

Despite his own mailers, Rubio called those belonging to Cruz, "an unusual way to end your campaign in the state" on Saturday.

"You'll have to ask him you know how he is feeling about his campaign, but it doesn't sound like he is feeling too good," he told reporters in Ames, Iowa. "It sounds like he is under a lot of pressure and maybe not reacting very well to it. Which is problematic because presidents are under pressure everyday."

In response, Cruz's Iowa state chairman, Matt Schultz said, "I think it's bizarre that Marco Rubio criticizes Ted's voter turnout mailer. This is just another example of Marco wanting to take both sides of every issue."

But Cruz's campaign literature drew a rebuke from several of his fellow candidates too.

Pate has not said Cruz is under investigation, contrary to what Trump tweeted.

Cruz defended the mailers while speaking to reporters Saturday in Sioux City, Iowa.

"I will apologize to nobody for using every tool we can to encourage Iowa voters to come out to vote," he said. He pointed to a statement by Schultz, who was a former Iowa secretary of state.

"These mailers are common practice to increase voter turnout," he said, according to the New York Times. "Our mailer was modeled after the very successful 2014 mailers that the Republican Party of Iowa distributed to motivate Republican voters to vote, and which helped elect numerous Republican candidates during that cycle."

Researchers from Yale and the University of Northern Iowa studied the efficacy of a public-notification strategy when they sent voters letters indicating whether their neighbors had cast a ballot. Their research was detailed in the 2012 book, "The Victory Lab," where reporter Sasha Issenberg spoke with a Democratic consultant who said that technique could boost turnout in an actual election. According to the Washington Post, MoveOn used similar mailers in 2012 to help get supporters of President Obama to the polls.

One irony of Cruz's mailers is that higher turnout is generally expected to benefit Republican frontrunner Donald Trump. One polling organization, Monmouth University, has predicted that 170,000 people will show up to caucus on Monday - nearly 50,000 more Republicans than the total in 2012. According to their projections, increasing turnout to 200,000 voters would grow Trump's lead over next-closest rival Sen. Ted Cruz from 7 percentage points to 11 percentage points. But if turnout is 130,000 -- closer to the historical average -- Trump and Cruz could end up in a tie.