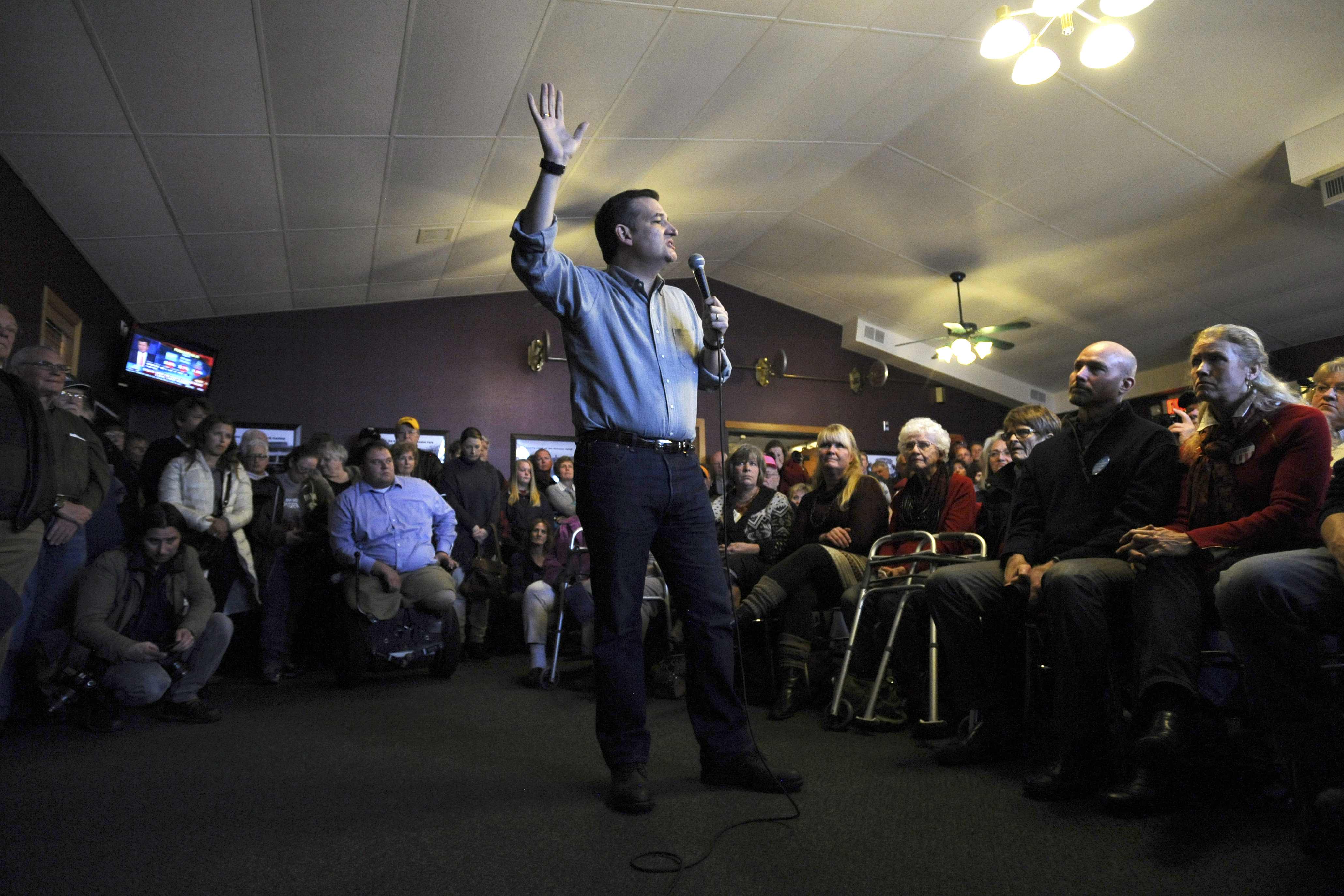 The last time Republicans in Iowa caucused, around 70,000 evangelical voters showed up. That might not sound like a big number, but those voters were 57 percent of the turnout. And that's the group Ted Cruz, a conservative Christian, has been pursuing hard since he announced his candidacy.

"When it comes to evangelical Christians, I can tell you we are working very, very hard to energize and motivate and awaken the body of Christ," he said on his Iowa bus tour last week.

But Cruz seems cognizant of the fact that evangelicals aren't exactly monolithic.

"We've got a pastors initiative here in Iowa, having a lead pastor we're pulling together in each of the 99 counties in Iowa," Cruz said.

Russell Moore, president of the Ethics and Religious Liberty Commission of the Southern Baptist Convention, described the political divisions between evangelical subgroups this way.

He was suggesting that Cruz appealed to Moral Majority types like Focus on the Family founder James Dobson, who has endorsed him. And Trump, Moore said, attracts "the prosperity wing of Pentecostalism," who tend to believe God will "financially reward believers," according to Roll Call.

Moore's assessment has been criticized by some religious leaders, but the idea of diversity among evangelical voters hasn't been refuted.

Craig Robinson of the Iowa Republican talked about a few of the influential evangelical leaders Cruz has attracted.

One is Bob Vander Plaats, the President and CEO of the Family Leader, who is viewed as one of the biggest evangelical leaders in Iowa, and he has personally endorsed Cruz. If his followers can be counted on to caucus, that's about 2,000 Iowans. He started with his 400-strong Christmas card list and is reaching out to people he met when he ran for governor in 2010.

"It is all turnout right now for the caucuses," Vander Plaats said in an interview. "Ultimately I will work on anyone who I have influence with."

Dobson has a broader appeal -- he's "close to Billy Graham status," Robinson said, adding that Dobson "rises above the political animal," that is, he could bring in evangelicals who are not necessarily politically active.

And then there's 32-year-old Pastor Joseph Brown, who is leading the 99 Iowa Pastors initiative Cruz mentioned. Brown might be able to attract fresh blood into the politically engaged evangelical lane with his grassroots effort. "I am young, but I've never seen a coalescing of evangelicals like we are with Cruz," Brown told CBS News.

Cruz also has another pastor in his corner who's been an effective force on the trail for him, his father, Rafael Cruz. The elder Cruz, a traveling minister who has come through Iowa frequently over the years, has been steadily winning over other pastors in Iowa.

"When they say Rafael Cruz is the secret weapon in Iowa, I agree," Brown said. "I have spoken to hundreds of pastors, and he is what is pushing the evangelical vote in Iowa."

During October's Family Leadership Summit in Des Moines, Rafael Cruz may have outshone Mike Huckabee, Bobby Jindal and even his own son when he took the stage late in the night for about an hour, as the audience of 1,700 sat captivated.

And Cruz even built everyday evangelical Iowans into his stump speech, which probably also attracts the attention of Iowans. For months, he talked of Dick and Betty Odgaard, who were forced to close their family business because they would not host same-sex marriages. Their story became a part of Cruz's stump speech in Iowa for many months. Cruz said was one that should inspire believers to live out their faith.

Cruz still can't say he has the support of all evangelicals in Iowa.

"Anyone who thinks that Senator Cruz has the Iowa evangelical vote wrapped up is kidding himself," said Jamie Johnson, an Iowa political operative who worked for Rick Perry's presidential campaign. Johnson pointed out evangelical pastors support several candidates in addition to Cruz, including Rubio, Trump, Huckabee and Santorum.

Still, Johnson conceded that Cruz "is doing more than any other presidential candidate to reach out to evangelical voters in Iowa, and other candidates should not take that vote lightly. It is a powerful voting bloc."

In 2012, "Evangelicals were so split that former Senator Rick Santorum won a plurality of them in the Iowa caucuses with only 32 percent of their vote," recalled Ramesh Ponnuru, in an article for the American Enterprise Institute.

Those roughly 22,160 evangelical voters for Santorum, however, constituted the vast majority of his winning total of 29,839.

It remains to be seen if Cruz can win over the clergy in Iowa and more important, whether that will translate into winning over evangelical Iowans.

Cruz appears to have a strong start, though. December Des Moines Register poll showed 45 percent of evangelical GOP caucus goers support Cruz, putting him ahead of any other candidate.