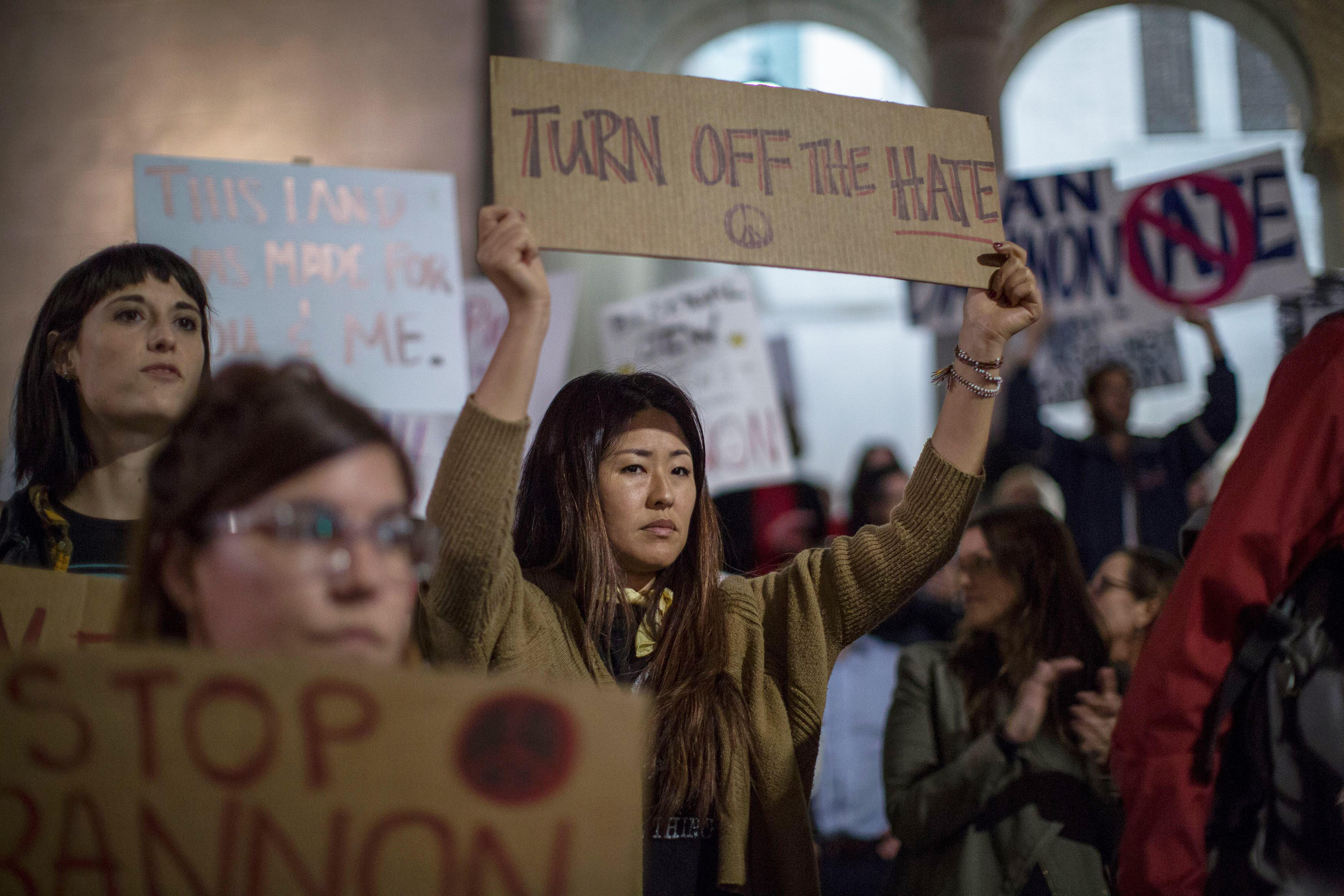 Online ad sales aren’t something that typically capture the imagination. But throw in corporate shaming with some political wrangling, and the topic gets downright interesting.

After the election of President Donald Trump in November, a secretive organization called Sleeping Giants popped up on Facebook and Twitter. It’s mission: “To stop racist websites by stopping their ad dollars.”

Sleeping Giants’ main target has been Breitbart News, which made headlines Wednesday after protesters at the University of California at Berkeley demonstrated against an appearance by one of its columnists. The right-wing news and opinion site, formerly run by senior Trump aide Steve Bannon, has been criticized as a platform for conspiracy theories and racism. Bannon himself called Breitbart “the platform of the ‘alt-right,’” a loose, online movement of people promoting the notion of “white identity,” including white supremacists and those advocating for a separate white homeland.

Sleeping Giants decided to get companies to block their ads from appearing on the site. And in doing so it learned that because of the way online ads are sold, few advertisers know where their ads appear.

So far about 820 companies have blocked their ads on Breitbart, according to Sleeping Giants. They include big consumer brands like Kellogg’s, BMW and Visa, as well as dozens of tech companies, including Autodesk, Lenovo, HP, Okta, Vimeo and T-Mobile’s parent company Deutsche Telekom. Ride-hailing company Lyft also decided to block its ads on Breitbart. Uber, which has been called out by Sleeping Giants for its ads on the site, didn’t respond to request for comment.

“One of Lyft’s core values is to uplift and support one another in all that we do,” said Lyft’s director of communications, Adrian Durbin. “We strive to ensure that our advertisements appear only on sites that share this value.”

Similarly, an HP spokesman said, “Our vision is to create technology that makes life better for everyone, everywhere and we have no intention of advertising on sites that don’t align with our values as a company.”

A Lenovo spokesman touched on a different point: “Following a recent article regarding women in science, tech, education and math (STEM), Breitbart has been blocked from all current Lenovo media campaigns. By the way, at the same time, we also tweeted: ‘Our ads are now blocked on that site. Incidentally, we think women should study TONS of science and math.’”

That’s not to say everyone has joined in the Breitbart boycott. Uber, Amazon and AT&T ads continue to show on the website. Like Uber, Amazon didn’t return a request for comment. AT&T declined to comment for this story.

Once politically neutral, Silicon Valley executives have become outspoken on social issues. Two years ago, Salesforce CEO Marc Benioff threatened to cancel all spending in Indiana after then-governor Mike Pence signed a bill that would have allowed businesses to discriminate against gay and transgender people. Apple CEO Tim Cook wrote a now-famous op-ed in the Washington Post against similar laws in other states. Earlier this week, the CEOs of Facebook, Google and Microsoft criticized President Trump’s executive order temporarily blocking immigration from seven Muslim-majority countries to the US.

Their stance is notable because the tech industry employs more than 6.7 million people and accounts for 7.1 percent of the country’s GDP, according to the Computing Technology Industry Association.

How it all began

That’s when Sleeping Giants steps in.

Sleeping Giants was born shortly after Trump’s win in November. Its organizers, who’ve asked to remain anonymous, said in email interviews that they hadn’t spent much time on Breitbart before the election and were curious to see what kinds of companies were placing ads on the site.

The first company they came across was SoFi, a self-described alternative finance company that does things like help college graduates find better rates on student loans. They took a screenshot of the ad, started up the Sleeping Giants Twitter account and tweeted the screenshot to SoFi’s CEO.

“Within 30 minutes, he got back to us and was surprised the ads were on the site,” said Sleeping Giants. “This set off alarm bells to us, as we assumed that advertisers knew where their ads were showing up.”

It turns out most companies have no idea where their online ads appear. Most online ad placement services use “programmatic advertising,” which targets people instead of websites. That’s why when you’re online shopping for something like shoes, you may see an ad for those shoes across various sites you visit. With programmatic advertising, those shoes seemingly walk in your footsteps around the internet.

If a company doesn’t want its ads to show up on a certain website, it has to actively block that domain, said Mark Irvine, senior data scientist for online advertising software company WordStream.

“In the past, these programmatic companies have been able to block ads from appearing on pornography sites or next to violent content,” Sleeping Giants writes in its FAQ. “But what they all missed was the fact that ads could appear next to highly charged, inflammatory and often fake news.”

But momentum for Sleeping Giants’ campaign really picked up in December, after cereal maker Kellogg’s said it was removing ads from Breitbart because the site doesn’t align “with our values as a company.”

Breitbart reacted by launching its #DumpKelloggs boycott and told the Los Angeles Times that Kellogg’s decision was equal to “economic censorship of mainstream conservative political discourse” and “as un-American as it gets.”

Around the same time, dozens of other companies, including Warby Parker and Allstate, began to block their ads from the news site.

“The number of ads from major advertisers are way down,” Sleeping Giants claims after perusing Breitbart’s advertisers, while acknowledging it doesn’t have information on Breitbart’s ad sales. It says a review of Breitbart.com shows that “most of the ads now are for more local and boutique companies.”

The boycott may not hurt Breitbart’s bottom line. That’s because of the way online ad sales work.

Most online ads are sold through massive digital advertising platforms like Google’s AdWords. One of these platforms, AppNexus, said in late November that it had blocked Breitbart from using its ad-serving tools because the site violated its hate speech policy. Shortly after that announcement, two other ad platforms, TubeMogul and RocketFuel, did the same, according to Wired.

Others platforms, like AdWords and AdRoll, say they let their clients choose which sites to block.

Sleeping Giants said it has begun to appeal to advertising platforms as part of its long-term efforts.

Online advertising software company WordStream has taken a deeper look at the success of ads on Breitbart. It places ads for more than 3,000 companies. Of those clients, roughly 40 percent have requested to block Breitbart. Even so, WordStream’s Mark Irvine said the boycott probably wouldn’t affect Breitbart.

“At best, we’re talking about removing a small share of all the advertisers that could possibly serve Breitbart,” Irvine said.

To a certain extent, Breitbart gets paid as long as its ad spaces are being filled. Still, ad dollars also depend on how often ads are clicked. Having major advertisers pull out could affect revenue, but Breitbart likely wouldn’t feel a squeeze until big ad platforms start blocking the site wholesale, said Irvine.

“Once you get a large player in the game, such as Google, Facebook or an ad provider such as AdRoll, that’s when domains such as Breitbart could begin to feel financial burden,” Irvine said. “With one advertiser, it’s one in several million. Whereas if you were to pull several million at once, then that penalty is passed on.”

Criticism of Breitbart prompted a tweet on Wednesday by Trump, who questioned whether UC Berkeley, known for its advocacy of free speech, should lose federal funds for protesting “people with a different point of view.”Students had demonstrated against an appearance by Breitbart editor Milos Yiannopoulos, a self-proclaimed internet troll who was banned from Twitter last June after leading a harassment campaign against “Ghostbusters” actress Leslie Jones.

For now, advertisers like Visa and Lululemon continue to block their ads from Breitbart one by one.

“Visa works with its media buying agency to constantly optimize the ideal mix of sites where our digital ads may appear,” a Visa spokesman said. “Part of this process includes regular safeguards to avoid our ads appearing on sites with sensitive, risque or controversial content.”