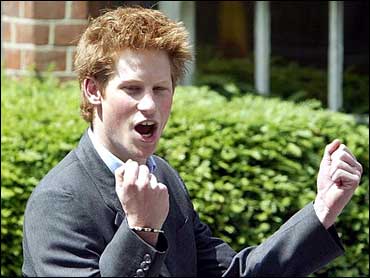 A former teacher who claims she was unfairly dismissed from Eton College after being ordered to help Prince Harry cheat on an exam played a secretly recorded tape of conversations she said prove her allegations.

The former teacher, Sarah Forsyth, 30, has told the tribunal that she wrote nearly all the text of an art project that Prince Harry submitted to pass an important exam in 2002. The grade helped him win admission to his next school, Sandhurst, where he is now training as a military officer.

Forsyth's attorney, Robin Allen, quoted Harry as saying on the tape: "It was a tiny, tiny bit. I did about a sentence of it." The tape was not played during the hearing.

Forsyth claims that Prince Harry, the son of Prince Charles and the late Princess Diana, was referring to the amount of work that he had done on the project submitted to the exam board.

However, Eton later released its own transcript of the tape, with a slightly different quote: "I was, like, a sentence in it."

Paddy Harverson, a spokesman for Prince Charles, told the hearing that the allegations had previously been disproved and it was unfair for Forsyth's lawyers to give the court only a small portion of the tape. Harverson and accused them of having "placed their own interpretation upon it."

"The tape ... contains barely audible half-sentences, and it appears to have been edited," Harverson said. "It is also difficult to tell what Harry is saying and what he is referring to, due to the poor quality of the recording and the disjointed nature of the tape. The fact remains Harry did not cheat."

Thursday's hearing was held to prepare for next year's tribunal on Forsyth's alleged unfair dismissal.

Forsyth claims she was fired on June 16, 2003 as a teacher at Eton, one of Britain's most prestigious private elementary and secondary schools, after being harassed by Ian Burke, then head of Eton's art department. She said Burke ordered her to do some of the work on Prince Harry's art project.