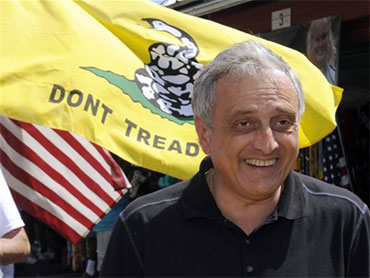 It's tea time in America.

Conservative Christine O'Donnell pulled off a stunning upset over nine-term Rep. Mike Castle in the Republican Senate primary in Delaware Tuesday, propelled by tea party activists into a November showdown with Democrat Chris Coons. After a primary season shaped by economic pain and exasperated voters, the grass-roots, anti-establishment movement can claim wins in at least seven GOP Senate races, a handful of Republican gubernatorial contests and dozens of House primary campaigns, and it influenced many others.

In the fight for New Hampshire's Republican Senate nomination, a second insurgent trailed in vote counting that was still going on Wednesday. After lagging in early returns, former Attorney General Kelly Ayotte moved ahead of Ovide Lamontagne with a lead of roughly 1,000 votes, with results tallied from 85 percent of precincts. Ayotte was backed by establishment Republicans and Alaska Gov. Sarah Palin; Lamontagne, a former chairman of the state Board of Education, campaigned with the support of tea party activists.

The Delaware outcome reflected the energy and enthusiasm of the tea partiers, but O'Donnell also enters the race against Coons as an underdog, putting GOP control of the Senate further out of reach. Former George W. Bush political adviser Karl Rove told Fox News Channel, "This is not a race we're going to be able to win."

Speaking at an Elks Lodge in Dover, Del., O'Donnell thanked Sarah Palin for her endorsement as well as the Tea Party Express, a California political committee that spent at least $237,000 to help her defeat Castle, a moderate and a fixture in Delaware politics for a generation.

"Never underestimate the power of 'We the People,'" said O'Donnell, who predicted the general election campaign would focus on jobs and rising national debt. "'We the People' will have our voice heard once again in Washington, D.C."

O'Donnell, a former marketing consultant with a checkered record was a dark horse until two weeks ago, reports CBS News correspondent Nancy Cordes The tea party express barreled in and an endorsement from Sarah Palin followed. The Republican Party scrambled, fearing this would upset another GOP candidate as it already had in Utah, Alaska, Kentucky and Nevada.

Her victory set off a round of accusations and fingerpointing inside and outside the GOP.

Republican Party officials who saw Castle as their only hope for winning the Delaware seat once held by Vice President Joe Biden made clear they will not provide funding for O'Donnell in the general election. The Republican state chairman, Tom Ross, has said O'Donnell "could not be elected dogcatcher," and records surfaced during the campaign showing that the IRS had once slapped a lien against her and that her house had been headed for foreclosure. She also claimed falsely to have carried two of the state's counties in a race against Biden six years ago.

The defeat in Delaware stings for the GOP because the moderate Castle, who has won in the blue state 10 times was considered a shoo-in to defeat the Democrat in the fall, Cordes reports. If Republicans don't win Delaware, their chances of winning back the senate are almost nonexistent. Democrats are seizing on this upset to argue the Republican Party has been taken by the right wing - moderates need not apply.

Still, "The intensity gap that we're seeing between the two parties this election cycle is mainly being fed by the tea party movement on the Republican side. So, net-net, it's still a gain," Republican strategist Dan Bartlett told CBS' the Early Show Tuesday.

But "The choice the country is going to be presented with [includes]one party that seems to be auditioning for a talk radio show host. You've got folks like Sharron Angle saying things like take up arms against the government and the Democrats want to talk about unemployment benefits and Wall Street," Democratic strategist Tanya Acker said on "The Early Show."

The victories by O'Donnell and Paladino are the latest evidence of the influence of the tea party movement, a loose-knit coalition of community groups that advocate limited government, tightfisted spending and free markets.

Massachusetts Sen. Scott Brown, who was aided by spending by the Tea Party Express, became an overnight Republican star in January when he claimed the seat held for decades by the late Sen. Edward M. Kennedy. Brown's win set the stage for a year of outsider candidates, and the tea party has scored prominent primary election wins in Utah, Nevada, Kentucky, Colorado and Alaska.

But can they win in November?

O'Donnell and other tea party candidates have called for an abrupt turn toward austere government, and the question will be how far voters want to go to reshape Washington.

The movement's spirited rallies have attracted tens of thousands of people, and they've made their presence felt at the polls: Republican turnout in the primary season has well outpaced Democratic. Even in races where the tea party has been less visible, its influence is evident in candidates' rguments. In the California race for governor, Democrat Jerry Brown is depicting himself as a tax-cutter who keeps his eye on the bottom line.

But for all its enthusiasm, the tea party has elevated sometimes unpolished or flawed candidates who in some cases will be more vulnerable in November, particularly in states or districts that are more moderate. The movement has also opened fissures with the GOP establishment. In Alaska, Sen. Lisa Murkowski, who was defeated by tea party favorite Joe Miller, is considering a write-in candidacy and says the Alaska Republican party was "hijacked" by the Tea Party Express, which she calls an "extremist group." The committee, based in California, endorsed Miller and ran ads supporting him.

Senate Majority Leader Harry Reid of Nevada once appeared headed for near-certain defeat in the state that has the nation's highest unemployment, but he's now running even with tea party favorite Sharron Angle, a Republican who wants to phase out Social Security for younger workers, opposes abortion in all cases, including rape and incest, and would break up the federal Education Department.

In Colorado, Republicans tried to get their nominee for governor, tea party favorite Dan Maes, to quit the race after embarrassing missteps. He's claimed he worked as an undercover police officer in Kansas - statements that have not been corroborated by authorities - and he once suggested that a Denver bike-sharing program is part of a U.N. conspiracy to control American cities.

For the GOP, the tea party "is a mixed blessing," said Bill Whalen, a fellow at the conservative Hoover Institution.

The movement's voters are energized but "anyone but Sharron Angle would have Harry Reid dead to rights. Abolishing the Education Department, it's a little too much," Whalen said.

The loosely connected movement, which took shape in early 2009 in reaction to bailouts and rising government debt, has no central organization that endorses candidates. There are thousands of local chapters, some of which are tethered to national groups.

The financial arm of the Tea Party Express the Our Country Deserves Better PAC has spent about $1.6 million in advertising and mailings in a handful of races, including $237,000 in Delaware. It pumped $588,000 into the GOP primary in Alaska to lift Miller over Murkowski.

The Tea Party Express' biggest investment has been in Nevada, where it has spent $790,000 on Angle's behalf. It also spent about $350,000 in Massachusetts to help Brown win.