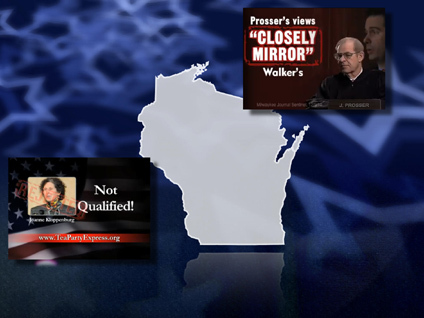 MILWAUKEE - Pro-labor organizations and one of the country's largest conservative tea party groups are pouring money into Tuesday's Wisconsin Supreme Court election in an effort to turn the normally sleepy race into a referendum on the national fight over labor rights.

The attention from conservative and liberal groups has energized voters and set the election on pace to be the most expensive high court race in Wisconsin's history. Former Alaska Gov. Sarah Palin even weighed in via Twitter on Friday, throwing her support behind the incumbent conservative justice.

The candidates, Justice David Prosser and Assistant Attorney General JoAnne Kloppenburg, say the race is about their qualifications. But the unusual level of interest has put the union issue front and center and shows passions remain inflamed over Republican Gov. Scott Walker's collective bargaining law, which sparked weeks of angry protests at the Capitol and made Wisconsin the center of the ideological debate over union rights.

Four conservative groups, including the Tea Party Express, have combined to spend $1.2 million so far on pro-Prosser ads, according to a media-tracking group. A liberal heavyweight had spent $993,000, as of Thursday. And spending on both sides was expected to hit a furious pace in the campaign's final days.

The seven-member court is officially nonpartisan. But Prosser is seen as part of a conservative four-justice majority, while a win by Kloppenburg would tilt the court's ideological balance to the left.

That could make a difference if a current challenge to Walker's law eventually makes its way to the state Supreme Court. The law is on hold after a judge ruled Friday that a temporary restraining order blocking it would remain in place for at least two months.

The law would force public employees to pay more for their health care and pension benefits, which amounts to an 8 percent pay cut. It also would eliminate the ability of most public employees to collectively bargain for anything except wage increases no higher than inflation.

Democrats have said the bill is meant to weaken the public employee unions that have been among their strongest campaign supporters heading into the 2012 national election. Newly empowered Republican governors in Ohio and other states have advocated similar measures restricting union bargaining rights, claiming such measures are needed to deal with state budget deficits.

Regardless of who wins the Supreme Court race, Walker says he won't interpret the results as an endorsement or indictment of his policies. Walker said voters who have a position on certain legislation should vote for lawmakers who support their views and use the Supreme Court race to choose who's more qualified to interpret the state Constitution.

But the electorate, along with lawmakers, is certain to find deeper meaning in the outcome, said Charles Franklin, a professor of political science at the University of Wisconsin-Madison.

"If the Democrats win it sends a strong message to the Republican lawmakers about how aroused the Democratic constituency is," he said. "Conversely, if Prosser is re-elected it's a huge win for the Republicans. It shows they can weather the current controversy. It should actually strengthen their resolve."

Wisconsin has a recent history of costly Supreme Court races, with outside groups spending a record $3.4 million in 2008, according to the Brennan Center for Justice, a New York University program that tracks media spending on judicial races. Spending this year reached about $2.2 million by Thursday, and a frenzied burst of last-minute ads had spending on pace to top $3.5 million.

One conservative group, the California-based Tea Party Express, is aiming to spend up to $200,000 on an ad that paints Kloppenburg as unqualified for a judgeship and a puppet of union bosses. The group says its Wisconsin members asked it to get involved after labor unions went on the offensive against Prosser.

On the other side is the liberal Greater Wisconsin Committee. The group has spent nearly $1 million since Thursday, including on a TV ad that calls Prosser a Walker clone who would be a rubber stamp for the governor's policies.