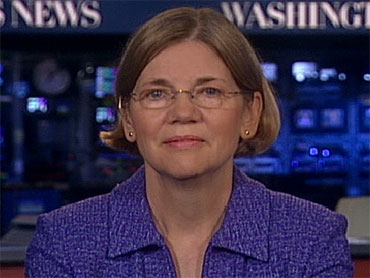 (CBS)
Executives at bailed out U.S. firms have to "understand you can't party on like it's 2007" when it comes to compensation, TARP's congressional watchdog said Thursday.

Elizabeth Warren, who chairs the congressional oversight panel for the Troubled Asset Relief Program, told CBS' "The Early Show" that executive compensation has become a "problem in American industry" that must be fixed.

Lavish corporate pay packages, even after the taxpayer-funded bailouts, have stoked anger and resentment in Washington D.C. and around the country.

"You know, you really begin to wonder what it's going to take to get the attention of the people in charge of these very large corporations," Warren told "Early Show" co-anchor Harry Smith. "They have taken taxpayer money, unemployment is now running at almost 10 percent. … And yet the executives want to say 'I take your money when I make mistakes and I still want to compensate myself richly because I'm the one who's in charge of this big company.'"

"Being in charge also means being responsible. And I think what that really means is you take the pain when you've had to turn to the taxpayer and asked them for their money for support."

Total executive compensation packages, including bonuses, would be cut in half.

"When the congressional oversight panel did its regulatory reform report back in January, we made the point that executive compensation right now has got the wrong set of incentives in it so that if a company can pump up profits in one quarter short term … then you get too much money even if that means you could actually be doing a lot of damage to the company long-term and a lot of damage to the economy," she said.

But what kind of hammer is the White House willing to wield in order to enforce a pay cut? Warren doesn't think the government will go so far as to take TARP funds back from the companies, but pressure exists anyway.

"I think the fact that the government has given so much some in TARP money is going to make these executives think and think again before they don't follow the government's instructions here on pay."